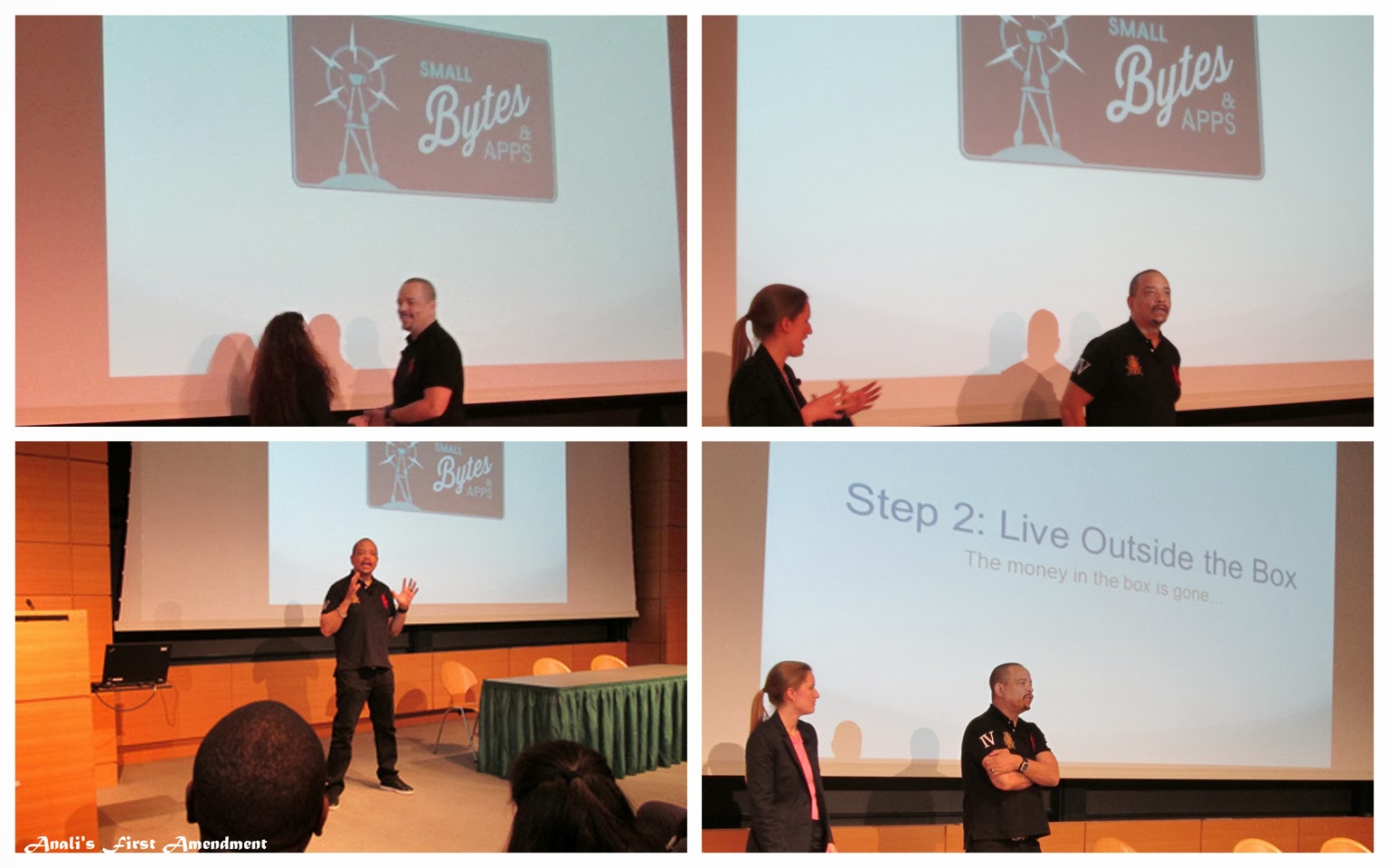 Last Saturday I attended the Small Bytes & Apps Conference at MIT, a one-day crash course on launching your personal brand. There were several wonderful speakers, but the keynote speaker was Ice-T and he definitely stole the show. He has already lectured at Harvard, Princeton and Stanford, now he has MIT under his belt as well.

I was really excited to hear him speak, because when I think about personal branding, Ice-T obviously knows how to do it. He went from causing a national controversy over a song to being one of the most well-known police officers on television.

He spoke about learning that the President was mad at him because of the song Cop Killer with his band Body Count. Those of us in the audience were asked to imagine what it would be like to suddenly hear President Obama speak our name saying that he was angry with us. It's a whole other level. By the way, Ice-T's Twitter handle is @FINALLEVEL.

Some say that all press is good press, even bad press, but he disagreed. He did not like having everyone mad at him. However, he was a household name after that and he was able to use that to his advantage. Lemons to lemonade.

He lived what he told us and dropped some serious knowledge. Yes, I got caught up. I'm still trying to absorb it all.

Ice-T definitely has a sense of humor and at one point was talking about some of the things that he has said and done, but then said, "I'm not like Kanye. I don't say dumb crazy sh*t." He dropped the F-bomb more than a few times and likes the MF word too. He knows how to make his point and spoke about making distinctions.

"Is it a charity or a business?" If a business approaches him, he asks how is he going to make some money. What will be his return?

"Don't confuse your friends with business associates." He does not think that he could talk to Dick Wolf if his viewing numbers went down. He brings in ratings and what he brings is what gives him leverage. He has no illusions about the reality of their relationship.

"Can you walk into someone's house and go in their fridge? If you can't, they aren't your friend. Don't get your ego in this sh*t."

He spoke of Ice's Law. "Know that everything will go wrong. It  never goes right. Other people don't see your vision. Know that loss is part of the game."

On reality television, he said that they are perpetual commercials. "What are you selling? How will you monetize?"

"Quality is what brands. If it is really good, it will sell. Nothing can stop a good record. You cannot stop quality."

"It's all about the money. Get your money, then do what you want to do." He mentioned again about not letting your ego get in the way and working very hard.

"Keep young people (17-20 year olds) around you. They know things. Open up to the future." He mentioned doing podcasts now.

He keeps his fan base strong and says that the fans will insulate you from the haters, so you don't have to. He talked about how "people hate up and not down." It's all about jealousy and people feeling that they should have what someone else has.

On asking someone for money, he says that you have to humble yourself. He was not kidding and showed the body language required. Egos are real and you have to defer to the person in power.

On integrity, he says that if you go broke, your integrity can give you another chance, so keep it intact.

"Work hard. You got to be willing to bust your ass. It doesn't matter when it happens. If it happens when you're 85, then it's right on time."

"Remain calm. Do not panic. Believe in your idea. Surround yourself with people who are smart and have a good work ethic."

"Do not get comfortable. When you get to the top, that is when you push." Keep pushing. Planting seeds. Say things that you want to do, that you are thinking about doing. Say it when you are at your peak.

"Humble yourself to this game. Someone to the left is better than you. Someone to the right would die to be in your shoes." You are only competing with yourself. Nobody else.

Advice now that he would give to himself at 19. "Think in broad strokes. Keep your mind open."

* * *
Pretty intense right? I must say that I was impressed. I've been watching House of Cards for the past couple of weeks and see some themes between what I learned at this conference and with Frank Underwood. Not crime, just calculation or I guess business acumen.

Based on all that I learned, I wondered if Ice-T had any new ventures coming up. I was sure that his appearance was timed with something new. Then I saw this tweet from yesterday.

+ + +
Disclosure: My admission to the conference was complimentary.

Nance said…
I find Ice-T, as a television actor on "Law and Order" to be very authentic. I read this post with great interest, and I think he's very intelligent regarding his personal product. He makes a lot of sense, and he makes some very cogent points regarding friends v. business associates. He speaks the truth when he talks about the value of humility and the sense that there will always be someone next to you to take your place and someone on the other side who has already been there and is doing better. What a fascinating lecture!
2/28/14, 10:25 AM

Lisa Johnson said…
nance - So glad you enjoyed the post! I always appreciate your input. Ice-T is an incredible speaker. He obviously knows how to work a crowd and has so much knowledge. I was taking notes like crazy! : )
2/28/14, 3:03 PM