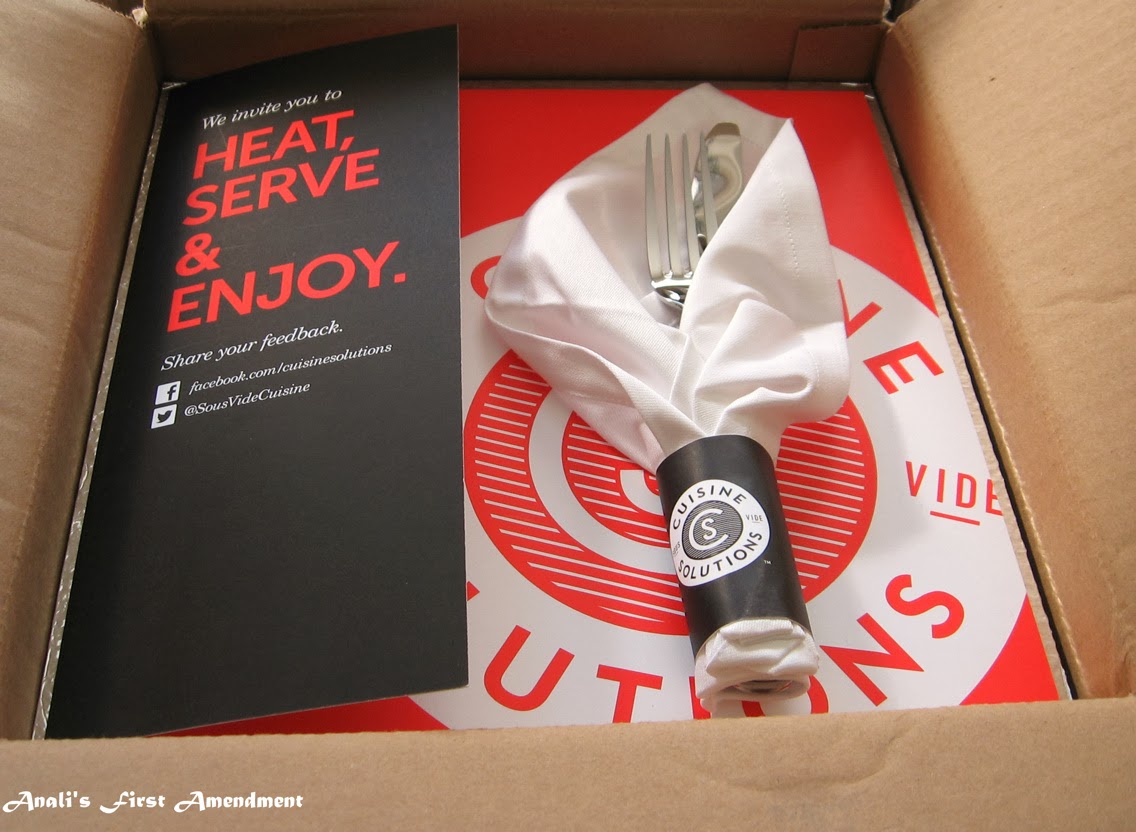 The day that I opened this box was a good news / bad news type of a day.

The bad news was that there was a horrible rainstorm happening. Terrible wind and really torrential downpours. Tiny leaks started happening in my apartment. Then in the front and back halls. Then the leaks started gushing.

At first I could catch the water with buckets, then it was too much and I was running around trying to catch them all.

Then I looked up at one of the light fixtures and noticed it was filled with water. Yup. Water all nicely getting into the electrical wiring. Well, that couldn't be good.

Long story short, after the fire department and electric company left, there was no electricity. So no refrigeration.

Now for the good news. The food delivery that I had been waiting for requiring immediate refrigeration was delivered. Yaaaay!! Oh no....

Yup. Lemons, lemonade.... You get the picture. Anyway, that was weeks ago. Since then I finally had the chance to try this food. That was good news too!

Cuisine Solutions had contacted me a while back asking if I'd like to try some of their offerings. I was curious about the sous-vide method that they use and about the taste.

I picked a couple of chicken entrees, so that G and I could try them. They have a wide variety of foods and I chose Chicken Florentine and Chicken Adobo.
Both G and I thought that the Chicken Florentine wasn't bad. However, we also thought that the portions were rather small and there could have been more flavor. Some pluses I noted were that if you are trying to lose weight, there were hardly any calories.

Also, the sodium level was pretty low. Most premade foods have a fairly high sodium content. My guess is that the way the food is cooked may play a role, so salt is not needed as a preservative.

The sous-vide cooking technique was developed in 1971 by Dr. Bruno Goussault. Sous-vide is French for "under-vacuum." The website gives more information.


"Our sous-vide products are vacuum-sealed and slow-cooked at lower temperatures, so they are naturally free of pathogens. We don’t have to add preservatives or beta-blockers to our foods to make them safe or to extend their shelf life."

Cuisine Solutions appears to be the authority on this method and supplies sous-vide cuisine to restaurants, hotels, airlines, cruise lines, and even the military.

Based on the number of places that they supply, you may have already tried some of their food and just not realized it. You can also buy their foods at several grocery stores including Wegmans and Whole Foods.
I was glad that I chose two flavors to try, because we both LOVED the Chicken Adobo. It was so good! Full of flavor and a bigger portion too!

Now I'm not one to pretend that something I bought was made from scratch, but if you are the sort who might, I would recommend taking credit for this one.

* * *
Disclosure: Entrees were provided compliments of Cuisine Solutions. Thank you!

Chris O said…
Happy New Year Lisa!! While the problems with your were bad at least your approach to them was upbeat and positive if not funny at times! I've heard of sous-vide and have seen it on America's Test Kitchen. Your pics made me want to run and get a fork! Take care.
1/9/14, 4:56 AM

Lisa Johnson said…
chris - Happy New Year to you too! It was much easier being upbeat looking back than in the moment. Whew!
1/9/14, 8:54 PM