Desserts With Borders: Tiramisu For Two 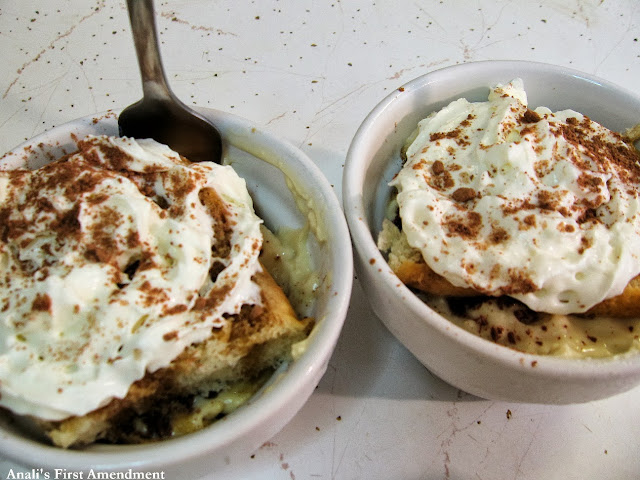 It's hard to believe that it's been almost four months since I last blogged about a new single serving dessert.

I've drastically reduced my baking since I'm focused on losing weight. I'm no longer eating dessert on a regular basis and real progress is being made on the weight loss front. But it's to the detriment of my food blogging. We really can't have it all.

But I still eat dessert. It would be crazy for me to totally give it up. As one of my very funny co-workers would say, "I would feel anger in my heart."

Not wanting to feel anger in my heart, I listened to another co-worker's suggestion when I asked what my next single serving dessert should be. She suggested tiramisu. Brilliant! I loved the idea as soon as she mentioned it.

Tiramisu is one of G's favorite desserts and I've always wanted to try making it, but could never get over the idea of having to buy ladyfingers. I never buy them and prefer to make desserts from things that I have around the house. If I have to buy something special for a dessert, then I want to be able to use it for something else if there are leftovers. No offense to any ladyfinger fans out there, but I see no other use for them except tiramisu. Which is not a staple dessert for me.

It was early summer when I started thinking about a tiramisu recipe without using ladyfingers. What could I use in its place?

Serendipity struck when I was invited to the King's Hawaiian food blogger luncheon. King's Hawaiian was new to me as a brand, but I became an instant fan of their breads. The flavor is sweet and similar to the Portuguese sweet bread that I ate as a kid growing up in southeastern Massachusetts.

Sweet soft delicious bread. Hmmmm. I thought that it just might work. On the King's Hawaiian website, they have a recipe for Royal Hawaiian Tiramisu. I also looked to a recipe by David Lebovitz for more tiramisu inspiration.

After looking at the two recipes and seeing what I had around the house, I took a bit from each, made some changes, then shrunk the proportions down. It makes me feel like a magician when I do this!

The first time that I tried the recipe, the coffee flavor was too strong and it needed more moisture. I tweaked the recipe, but decided not to eat anymore dessert for a while, so I  put off recipe testing.

A couple of weeks ago, I tried the recipe. It makes enough for two instead a pure single serving dessert. The proportions were easier that way and I had to make enough for G. He loved it!

I must say that tiramisu is not quick to make no matter how much you shrink it down. Even with so many ready-made ingredients. But there is the positive aspect of portion control. And it's delicious too! Here's the recipe. Hope you give it a try!

Set aside two ramekins. If you don't have any and you're a fan of single serving desserts, they are great to have ready to go!

Combine in a small bowl.

Whisk together in a small bowl.

2 T chocolate shavings to add between layers. I usually have a dark chocolate bar around the house to use. If not, crush up some chocolate chips.

2 King's Hawaiian dinner rolls instead of ladyfingers for layering.

Cocoa powder for dusting the top.

Slice each dinner roll into thirds. Place 1/3  of the roll on the bottom of each ramekin. From here, do the same thing as described below for each of your two servings.

Drizzle some of the coffee mixture over the roll. Make sure you save enough for layering.

Add the final piece of dinner roll. By the time I got to this point, I had run out of the coffee mixture, so I poured 1 T of coffee liqueur over the top of each.

Cover both ramekins with plastic wrap and refrigerate for a few hours or overnight. When you are ready to eat, top with whipped cream and dust with cocoa powder. Yum!

Unknown said…
You definitely don't want to cut out desserts when dieting. If you are anything like me it just makes me crave them more and then end up binge eating. I love your single serving tip.
9/29/13, 10:20 AM