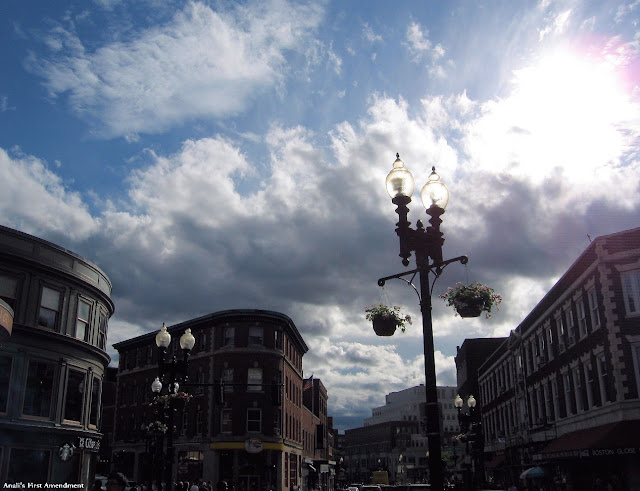 A few weeks ago, I took the T to Harvard Square to have lunch with a friend. I was rather disappointed with the place and wouldn't recommend it or go back, so I'm not going to mention it. The food wasn't bad, but the overall experience left me bleh.

After lunch, we walked around a bit. I don't think I've taken many pictures of Harvard Square, because I take it for granted. When I was in college, my friends and I would go  there all the time. Scorpion Bowls at the Hong Kong. Good Times. But I digress.

We know not to take people for granted. But I think we assume places and things will be around for a while. But places that were around for decades go away and are replaced by something else too. Remember Jordan Marsh? Filene's? Lechmere? Bradlees?

Jeez, remember Borders? I just finally threw away my discount card a few weeks ago.

Near where I live, there used to be one of the biggest most beautiful trees that I had ever seen. I saw it everyday and kept planning to take a picture of it. Somehow it never happened.

It wasn't going anywhere right? I'd have time. Wrong. One day I walked by and it was being torn down. Lesson learned. 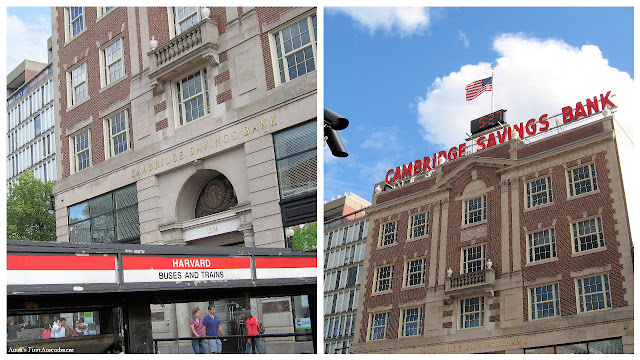 So even though I've seen these places many times, I played tourist and really looked and took pictures. It had been a while since I had been in the area.

Plus, some of you might be visiting the Boston area this summer for vacation. Maybe you'd like to see a few pictures right? 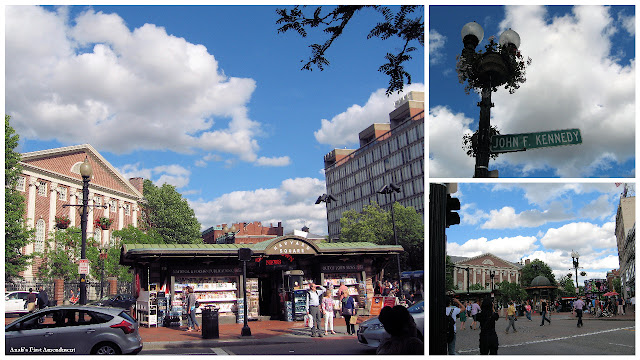 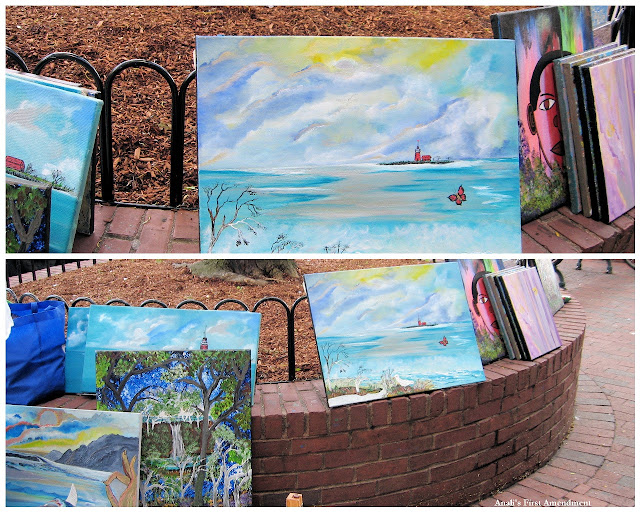 While I was walking around, I saw a man painting. I was going to take some action pictures, but by the time I circled back to where he was, he had stopped painting and was packing up to go. I especially liked the lighthouse paintings with all the water.

The artist is Dennis Smith and he is sometimes in Harvard Square, but likes to travel and paints wherever he goes. His company is Affordable Art From The Heart. 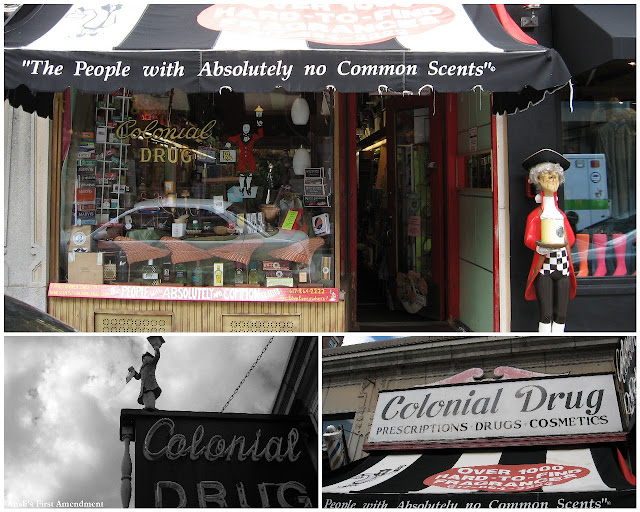 One of my favorite places in Harvard Square is Colonial Drug. It's a rather unassuming looking place and easy to miss, except for the statue out front.

But you don't want to miss this place. If you're into specialty soaps, perfumes and fragrances, then take the time to stop by. I first learned about it many years ago after visiting Paris where I bought some perfume that I really liked. I don't remember exactly how it happened, but the bottle broke by the time I returned home. I was heartbroken and tried to replace it, but couldn't find it at any stores.

Someone suggested that I try Colonial Drug, because they have a ton of hard to find perfumes from all over the world. According to the website, they have over a thousand. Sadly, I never was able to replace the perfume. I don't even remember what it was now, but I did find a new place pretty close to home.

It's a nice place to just look around and see what you'll find and where I first learned about one of my favorite things, Smith's Minted Rose Lip Balm. I don't see it many places, but know that I can find it here.

Colonial Drug is definitely a Boston area favorite and represents a time gone by. The old fashioned drug store. There aren't many of them around anymore.

As a kid, I remember going to the local pharmacy, where me and my best friend, also named Lisa, could buy earrings for just a few dollars and sit at the soda fountain in back on tall chairs and get a milkshake. Not a frappe or a Fribble. We would go to Friendly's for those. You could go to Brigham's too.

They are different things here in Massachusetts. A milkshake, at least back in the day, did not have ice cream. The other two did. The comment below is edited with links from this blog post on Universal Hub and gives a good breakdown.


Let me set the record straight. In Rhode Island and Massachusetts, a milkshake contains no ice cream, only milk and syrup. In the rest of the country, a milk shake contains milk, syrup, and ice cream. What is called a milkshake for most of the country is called a frappe in Massachusetts and a cabinet in Rhode Island. The Awful Awful is a thick ice milk shake served at the Newport Creamery in Rhode Island. Friendly's in Massachusetts also served an Awful Awful. Newport Creamery sued for copyright infringement so Friendly's changed its drink to the Fribble.

Either way, the pharmacy was a place that we could go as kids and I guess I had the feeling of a sort of independence going there. The start of going off and finding things on my own without my parents.

Speaking of independence. Tomorrow is the 4th of July! Have a good one!

Can-Can said…
You're so right. I remember the places and things that used to be (to paraphrase the poet Lucille Clifton). Recently storms took out some great old trees in my neighborhood and then a church renovation has had some others torn down. Those trees were my friends. I blogged about some of the places for bargains back in the day including Quincy Bargain Center in Quincy which was fa-bu-lous! Noticing, really looking at things, and taking photos which you're so diligent about is important because sometimes a space changes so much you can hardly remember if it really was how you remember it.
Joyous 4th to you as well.
7/3/13, 11:26 PM