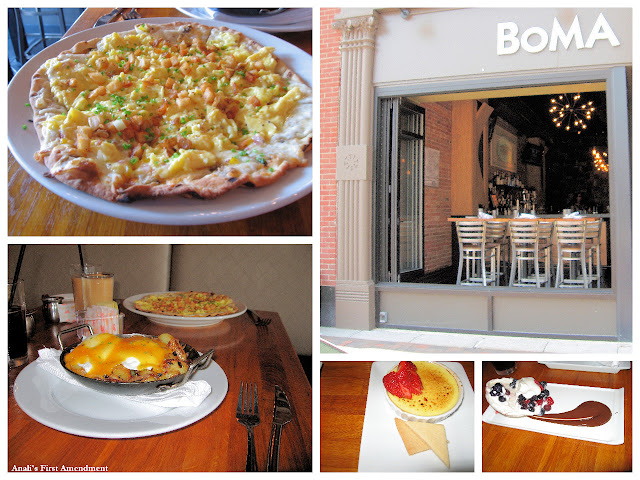 Recently I was invited to try BoMa Restaurant + Bar and to bring a guest too. It had been quite a while since I had a seen my friend Sarah, so we decided to have brunch this past Sunday. We've known each other since college, so it's always nice being able to talk with someone who knew me from way back when.

I decided to try something new with this restaurant review and shoot some video. I filmed several different segments and used the YouTube Video Editor to make the short piece below.  I'll be doing more video in the future and hopefully you'll be able to see some improvement over time.


So back to brunch. For those of you who like duck, there are a few choices on the the menu. Sarah had Duck confit hash with poached egg and siracha hollandaise, called Make Way For Ducklings. I had Morning Flatbread. The menu description says Sauce mornay, scrambled eggs, pepper and onions with duck fat home fries.

I tried both dishes and thought they were very good, but a bit salty. Overall the portions are  generous. I made four meals out of the flatbread, but was disappointed with the home fries. I was expecting larger wedges and they were very small potato cubes.

For dessert we had the Crème Brûlée and Mixed Berry Pavolova. I didn't try the Pavolova, but enjoyed the crème brûlée and thought the shortbread cookies were a nice added touch.

The menu has rather limited options, so you might want to look at it online before you go to make sure there is something that you like.

BoMa had been described in the email that I received as having outdoor seating. It does not have outdoor seating. At the front of the restaurant, the windows open up, so if you are sitting at the very front, you are sort of outside and have a nice breeze and sun shining in.

I liked the decor of the restaurant, but that nice ambiance is disrupted by music that is a bit too loud, as you can hear in the video, so you have to make an effort to speak up when trying to have a conversation. The music selections were good though and brought us back to the 80's.

There was a bit of a mix-up at the beginning. A reservation had been made in advance, but when I arrived, nobody knew who I was and they were not expecting us. Although seating was not a problem, because there were not many people there. Our order was taken quickly and the food arrived promptly as well, but then again, hardly anyone was there.

While most people were pretty nice, considering the mix-up and that I had been invited there, I would have expected a bit more in terms of customer service. And when I'm invited out to eat, where the meal is complimentary, I always make it a point to leave a nice tip, because the servers should not lose out just because there is no actual bill.

We did leave a generous tip, but there was no acknowledgement or thank you, which I thought was rather odd. My friend had read some Yelp reviews and said that based on what she read, she was not surprised.

There are a ton of restaurants in Boston, so there is a lot of competition. You can find good food anywhere, but it's harder to find excellent service. I enjoyed my meal at BoMa and do recommend the food, but I also think that the service could be better.