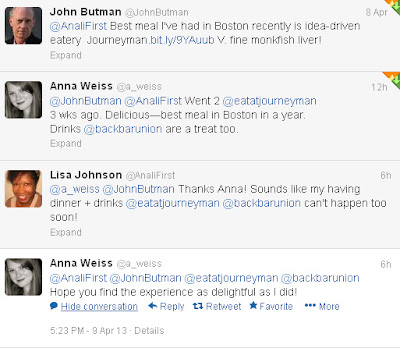 I love getting new restaurant recommendations. Especially when they are unexpected.

Recently on Twitter, both John Butman and Anna Weiss had some good things to say about Journeyman Restaurant in Somerville. Apparently Neil Gaiman found it via tweet too.

Journeyman sounds like a tasty place. Although Corby Kummer wasn't too thrilled in this Vanity Fair article.


In Somerville, near Boston, the young, self-taught owners of a restaurant called Journeyman made tasting-only menus a part of their business plan, along with the usual local/seasonal/carted-from-the-farm-or-raised-in-our-window-boxes ingredients. When I dined there last year, the inflexibility of the dour, dogmatic servers would have been comical had it not been so infuriating. As more and more restaurants adopt this model, tasting-only menus will empower formerly well-meaning, eager-to-please cooks and servers to become petty despots, and more and more diners will discover that absolute power irritates absolutely.

Looking at Urbanspoon and Yelp, overall people seem to like it. For now though, from what I'm seeing, it's not in the budget. Maybe in the future.