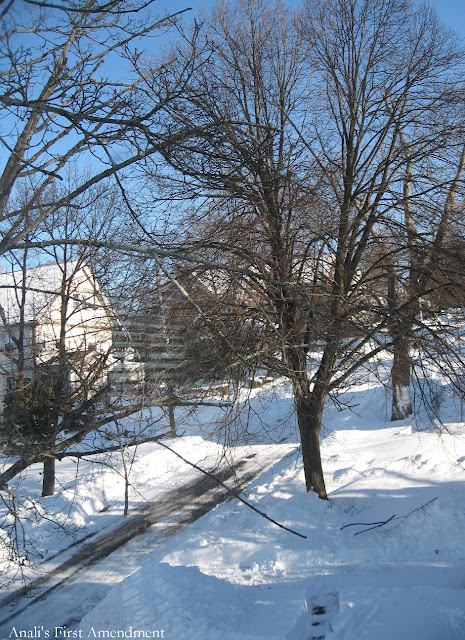 The other shoe finally dropped. That shoe's name is Nemo.

After having barely any snow last winter, we knew we'd have to pay. It was just a matter of time. I think we've paid in full.

The storm started Friday night. At first, I thought that we might be able to keep power. The lights started flickering. Then they went off, but came right back on. About fifteen minutes later, at about 10:30, the power went out.

The power came back on around noon on Saturday, so it wasn't that bad. However, as national and international news have reported, Quincy was hit very hard with power outages. Because we had lost power, I didn't know how extensive it was until I spoke to my Aunt who told me that virtually all of Quincy lost power.

My parents live even further south and have had no power since Friday night. Luckily their next door neighbors are very kind and have a generator. Over the past couple of days, they've given them warm meals and are letting them stay over tonight.

Hopefully they'll have electricity tomorrow and the pipes won't be frozen. The time for when the power will be restored keeps being extended by the utilities, so I don't know what to think.

Saturday I could barely even see out the windows, because they were covered with snow. Today there was a bit of melting, so I took the picture above and below left.

I thought it would be interesting to contrast the picture of the backyard now, with a summer picture. We sure know how to do change of seasons in New England!

I wish this storm had gone on with less damage and no loss of life, but there have been fatalities. Hopefully there will be no more loss of life and the predictions for an early spring will be true.

*Updated 2/11/2013* My parents got power back around 4pm today! Thank goodness! I shared my experience with the Patriot Ledger and they just published my letter here.

Chris O said…
Love the photos Lisa. After Sandy's wrath last year, we escaped with just three inches, for which we were thankful. Being without heat and light, especially in the winter, is not easy nor is it fun. I hope your parents are doing well and their heat and electricity have been restorted.
2/11/13, 7:05 AM