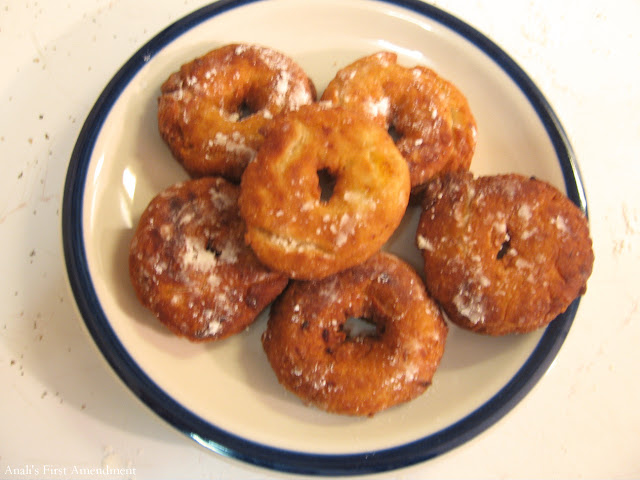 It's official. I've gone from being mildly obsessed with single serving desserts to being completely fixated on them. You remember the Nutella Chocolate Mug Cake and the Single Serving Chocolate Chip Cookies.

Cakes and cookies were nothing new. The recipes were just smaller versions of things that I was already familiar with. But now I've entered new territory.

Until tonight, I had never even attempted to make donuts. I don't fry very often unless it's a fried egg. Frying with a lot of oil kind of scares me. I took Torts! Things go horribly wrong all the time and adding hot grease to the mix only ups the ante!

But then I talk myself down. And I saw this recipe. The donuts were fried in just a small amount of oil.

Oh. And in case you're wondering. I cannot bring myself to spell donuts the other way. It just feels wrong. But for SEO purposes, it's one of the labels. A girl has be practical.  : )

Okay. So I found an amazing donut recipe. But it called for bread flour, which I don't have. Then I clicked the link in that recipe to the one that it was adapted from and it just called for regular flour. Perfect!

I decided that I'd like to try it, but wondered if I could adjust the recipe to make it single serving. I cut it in half and then in half again. Since I couldn't use a quarter of an egg, I used a portion of an old banana to replace that lost moisture and add some flavor. Also, I decided to use cardamom instead of cinnamon.

When I tried this adapted recipe tonight, I really didn't think that the donuts would come out too well and planned to revise it a few times. I mean they're donuts. They couldn't be that easy. Could they? Well, actually yes. I love this recipe the first time around!

From start to finish, it took about 20 minutes! 20 minutes! For fresh warm moist delicious homemade donuts! And there was no scary deep fryer oil splashing around! 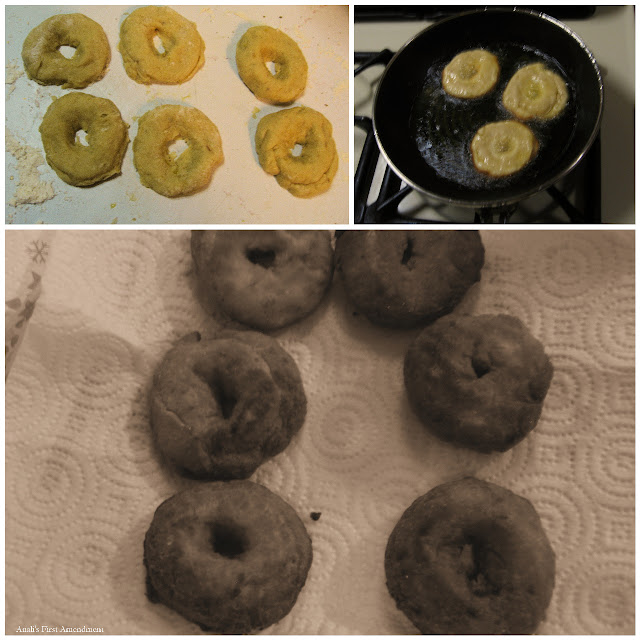 Can you imagine?! I call them a single serving size, but actually this recipe makes a half dozen mini donuts. So you could eat them all yourself at once. Or save some for the next day. Maybe another day too.

Or you could share them with one other person. They would be nice for a romantic Valentine's Day breakfast or brunch.

I saved a couple to have tomorrow with my coffee for breakfast. Looking forward to it! Here's the recipe below. I really hope you try these!

In a small frying pan, pour in just enough olive oil so you can fry the donuts. Turn up to medium high heat.

In a small bowl, mash together the banana and Smart Balance. Stir in the other ingredients until combined.

Pour some flour on the counter and roll the dough in it. Use your hands to pat the dough into a circle. I turned over a 1/4 cup and used it to cut out the circles. Then just used my finger to poke a hole in it and formed the dough to look like a donut.

The oil should be hot by now. Drizzle some water on your fingers and flick it into the pan. If it sizzles, then it should be hot enough. I used a spatula to place the donuts into the pan. I fried three at a time, but it will depend on the size of your pan. Let fry about a minute, then turn over with a spatula. Fry another minute.

Put a paper towel on a plate and place the donuts on the towel to absorb the oil. Sprinkle with a bit of powdered sugar. Enjoy!

*Updated 3/11/2013* Just read an article on the history of the donut. For those of you reading with an interest in donuts in addition to eating them, it's worth a read. Plus after reading this article, being American, especially being a New Englander, I feel comfortable that  spelling "donut" this way, and not the other, is very much correct. See an excerpt below with emphasis added.


"The more I explored, the more I saw the connection between donuts and holy days repeated throughout Europe, India, Asia, and Africa, among Hindus, Muslims, and Jews. In America, by contrast, donuts were embraced as an everyday food. Here, they took on the moniker "donut," the first donut machine and chain store were spawned, and the treat became breakfast, as well as a snack to be eaten at any time.

Some say donuts, in the form of sweet fritters called olykoek, landed with the Dutch in New Amsterdam. Other evidence—stronger, in my opinion—points to New England, where I had my American donut conversion. There, the donut was divorced from its Old World past. In America, Protestant settlers could ditch the Catholic holidays and enjoy fried cakes whenever they wanted."

SharleneT said…
I saw this and immediately copied it for tomorrow's breakfast! BUT, one of the advantages of dehydrating excess eggs is that you can actually get 1/4 egg, if you want to! Check out my blog for how to do it. And, I don't have any bananas around, so will let you know how they turn out! Love this.
2/2/13, 12:17 PM

Lisa Johnson said…
sharlene - Hope you like it! The banana really gives a nice flavor, but it should still taste really good. Let me know!
2/2/13, 12:20 PM