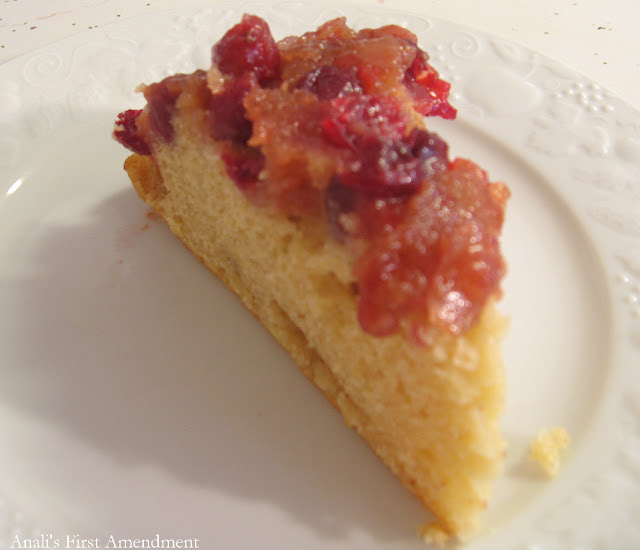 I've been in a cleaning out frenzy around the house. Cleaning out old folders. Giving things away to Goodwill. Trying to catch up with many "to do" lists.

My birthday is my personal New Year, so I try to get organized and eliminate things that I no longer need and make room for the new. Since nothing is ever completely done, when January 1st rolls around, I can give it another try.

One thing I have needed to use up was a package of frozen cranberries. According to The Cranberry Institute, they can keep well frozen for nearly a year. Well, good thing that I used them, because they had exceeded that by about ... a year. I know.

But really they were fine. I used them for a glorious new single layer cake. Since I was set on using cranberries, I decided to look through a few cookbooks and see what I could find.

I've had Chez Panisse Fruit, by Alice Waters for years, but don't think that I've ever made any of her recipes. Until now. When I first got the cookbook, I didn't really know who she was. But it looked interesting. Pretty funny looking back now. She's a legend!

So the cake. Cranberry Upside-Down Cake. Doesn't that sound like something from an ice frosted window looking into a Christmas Eve dream? It is.

But it's easy to make. And you can make it now. Please do! Here's a link to the recipe.

I'm sure it's perfectly good, maybe even better if you follow the directions by the book. But you know that I don't bake like that. There was a lot of adapting.

Right now I'm doing an experiment with flours. So I just randomly mixed a bunch of different flours (coconut, millet, etc.) together with all-purpose flour and I'm using that mixture as my "flour" to bake with for now. So far so good.

Now looking at the recipe that is linked and the one in the cookbook, I see that they are  different too. No worries. This is a standup recipe and the main part is cranberry upside down part, which I did follow, so that the topping would come out right. I don't have a cast iron skillet, so I just put my cake pan on the burner and it worked out fine.

The cookbook recipe called for a stick of butter instead of the canola oil for the batter. So I used Smart Balance and I used vanilla rice milk instead of regular milk. I also added more milk, because coconut flour sucks out the moisture from batter and I didn't want the cake to be dry.

I didn't separate the eggs or use cream of tartar, because I can't be so bothered. Do I sound like an exasperated baker? I'm really not. I just know myself and hate separating eggs unless absolutely necessary. From what I see of this cake, it's is NOT necessary.

This is the most awesome dreamiest cake ever and is perfect for as long as cranberry season lasts and then some. Whew! I love this cake. That is all.