This summer in Massachusetts, there has been all sorts of excitement with so many sharks on Cape Cod. Especially after Denver resident Christopher Myers was bitten by a great white. Talk about having a story to tell about your summer vacation!

So many of us have the same endless loop of the music from Jaws playing in our head with a mere mention of a shark. But when we really think about who's eating who, it's most definitely us eating the sharks.

A recent report by the Pew Environmental Group, says that those of us who fork over up to $100.00 for shark fin soup, might be consuming endangered species. Using DNA analysis, scientists at Stony Brook University and the Field Museum, found that the shark fin soup served in restaurants in 14 cities across the United States, including Boston, contained at-risk species.

The graphic below shows that Boston restaurants appear to be the worst for this practice. Boston was the only city found to be serving the scalloped hammerhead, which is endangered. 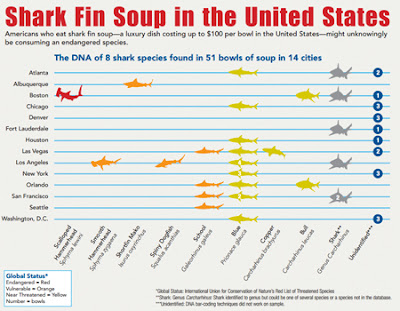 Here's an excerpt of the Pew Report below.

“The DNA testing again confirms that a wide variety of sharks are being killed for the fin trade, including seriously threatened species,” said Dr. Demian Chapman, who co-led the DNA testing at the Institute for Ocean Conservation Science at Stony Brook University in New York. “U.S. consumers of shark fin soup cannot be certain of what’s in their soup. They could be eating a species that is in serious trouble.”

This is quite disturbing to read. Maybe the next time we think of the Jaws soundtrack, instead of picturing a shark with its mouth wide open, we should picture someone eating a bowl of soup.