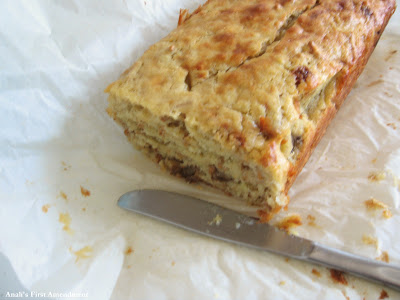 Finally things are back on track in this house. Especially in the kitchen. Very ripe uneaten bananas brought to mind the question, "Muffins or bread?"

I wasn't really sure, but wanted to use some leftover bran cereal too. So I looked through a new cookbook that I received a few months ago called Baking Basics And Beyond by Pat Sinclair. While randomly leafing through it, I found the recipe Banana Bran Bread.

Exactly what I was looking for! What are the odds of that?

I had looked through this cookbook before and saw a Pistachio Biscotti recipe that I had planned to try. I even bought the pistachios when they were on sale. Then things got crazy around here and they never got baked. Such is life. Maybe in a few weeks.

While I haven't read this cookbook cover to cover, I'm impressed with what I've seen so far. It's a good book for someone just starting to bake and for more experienced bakers as well. There are some suggestions for new bakers in terms of ingredients and equipment, but the recipes are interesting enough that you'll be excited to try them.

Baking Basics And Beyond is visually appealing and well-organized. My only disappointment is that I wish there were more pictures.  Not every recipe has one. For me, I like to see what the finished product looks like. The pictures that are there are so pretty, it would have been nice to see more. 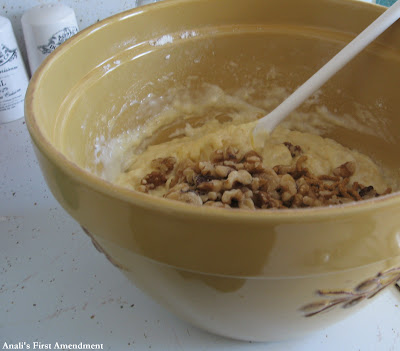 I adapted the recipe in my normal ways, by substituting Smart Balance for the butter and using vanilla rice milk instead of regular milk. I don't keep sour cream in the house, but always have vanilla Greek yogurt, which I used instead. Also, I didn't have dried apricots. Dried figs were an option that I considered, but I decided against using another fruit and added walnuts instead.
Two thumbs up for this recipe! Both G and I loved it! I'll definitely make it again and cannot wait to try more recipes from this cookbook. Here's the recipe below.

Tear off enough parchment paper to fill the pan and come over the sides. Push paper into pan and pour batter in it. Bake for about 60 minutes or until browned and a toothpick inserted comes out clean.

I baked this bread for immediate consumption, so I speed cooled it by placing in the freezer for about 15 minutes. Pull the paper out of the pan. So quick and easy! Cut bread and serve. Enjoy!

A random tidbit here. This was my first time using parchment paper. It is not the same as waxed paper as I once believed. Now I know how bakeries get that certain look on their baked goods. Sometimes it really is about the equipment. I don't think I'll ever go back to oiling and flouring a baking pan again.