Sometimes I wonder what people are thinking. Some of the press releases that I receive are so out of the realm of what would ever be of interest to me and probably any of you reading this blog.

But then other times, I receive news so perfectly timed and relevant that it's a beautiful thing. That's how I felt when I learned about Fóumami celebrating the Year of the Dragon with a special menu.

At the end of November, I started working on a new project not too far from where I was working in October.  Each day I passed by Fóumami, noticed the attractive exterior, but didn't know anything about the place. 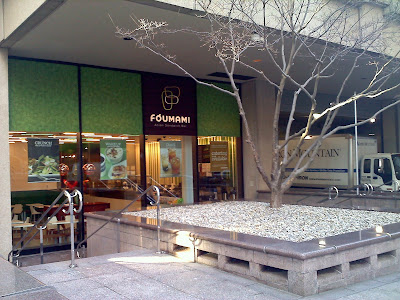 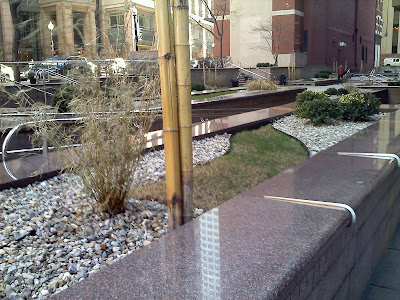 I wonder if feng shui was used for the design of the restaurant? Especially considering that the building is on a busy corner in the Financial District: High, Oliver, and Franklin Streets.

Then recently out of the blue, I received an email. Here's an edited excerpt below:

Chinese New Year or “Spring Festival” marks the transition from winter to spring in China and is the longest and most important holiday in the Chinese Lunisolar Calendar. For 15 days, starting in January, Fóumami Asian Sandwich Bar will celebrate the Year of the Dragon!


Red envelopes containing cash or other presents are often exchanged during Chinese New Year. Fóumami will be giving one customer a day, throughout the 15-day festival, a traditional red envelope gift with their purchase from January 23 – February 6, 2012.

As I read the email, I thought, "Isn't this the place that I walk by every day? Maybe I'll go there for lunch."

I had already been thinking about Chinese New Year. There seems to be an air of excitement about it, especially when it's the Year of the Dragon. More specifically, it's the year of the Black Water Dragon. On Point had a really interesting show discussing  it.

During the show, writer Gish Jen made an interesting comment. She said that she can see Chinese New Year becoming a style, like a theme at Bloomingdales or on a T-shirt.

That really struck a chord with me. It sounds rather horrible at first. For those of us who are not Chinese or Asian, yet we are intrigued with certain holidays and want to participate on some level, is it a homage to the culture to celebrate it? Or Is it disrespectful? Especially for someone who wants to financially capitalize on it. Is it a bit of both? I'll have to think about that a bit more as I work on an upcoming post discussing this exact issue but in another context.

As someone born in the year of the Green Wood Dragon, I must say that I'm looking forward to seeing what this Year of the Dragon holds as the new year begins on February 4, 2012.

But now back to the food! The suggested menu special was pork, which I don't eat, but there are selections available for everyone, including vegetarians. Everyone at Fóumami  was very friendly and more than willing to suggest alternatives to me. I was even given a sample to taste.  They did not know that I was a food blogger planning to write about them, so they are just plain nice!

I ended up having the Chicken Katsu, which is a panko-breaded chicken breast cutlet, cabbage, tomatoes, and katsu sauce on Shao Bing bread. I loved it and definitely recommend it. The bread is crisp and flaky on the outside, and soft on the inside. The exact texture that I like. And texture is so huge for me!

This past week I've been fighting a horrible head cold and have been drinking tea with lemon and honey twice a day in addition to doubling up on vitamin C and fish oil pills. I'm doing better today, so it's working.

What was also helpful was the tea at Fóumami. The menu says that the teas are iced, but I asked if I could have it hot and they were more than happy to oblige. I had the ginger tea. It's made with fresh ginger root, brown sugar, and Chinese red dates. It was just what I needed. Very strong but sweet enough for me. And I swear it may have booted a little bit of this cold right out of me! I may stop by in the mornings just to get the tea. Whether I have a cold or not.

Now one other thing about the menu that really excited me, but then disappointed me. There's a section for desserts. If you go to Chinese bakeries the sweets are awesome, but I never find those same sweets offered in a Chinese restaurant. So to see both together, I was almost over the moon!

I asked about the Táng Bing, which is a hot bing with melted brown sugar, and sesame, and then the Quiao Cookie, which are assorted Chinese cookies. I was told that they no longer carry them due to lack of interest. They are only available for catering.

What??!! Why must I be tortured like this??!! I was told that they had Red Bean Shaved Ice, which is shaved ice, red bean, mochi, milk, with assorted fruits. But I didn't want anything cold, so I didn't have it. *sigh*

Well life goes on without dessert. : ) Anyway, I really liked Fóumami and plan to bring a co-worker there soon. I suggest you do the same! Maybe we'll get a red envelope next time!

Esme said…
This looks rather good-we discovered a new wrap place that had a great bean with brown rice, zucchini, broccoli and carrot wrap with sirachi sauce.
1/29/12, 12:34 AM