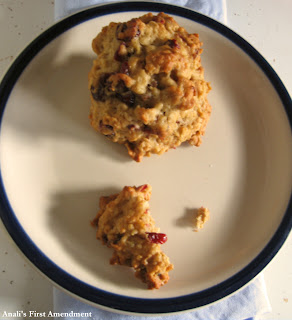 Quinoa is all the rage. It seems that each day there is a new recipe using it. Everyone is all oooh and aaah. Yes, it's the best thing since chocolate. Everyone loves it. Well, almost everyone.

I tried it before and honestly, I thought it was horrible. I'm very picky about texture and quinoa tasted and especially felt all kinds of wrong in my mouth. But as someone into food, I'm bombarded with constant new recipes and all the praise and love for this pseudocereal, which is part of the beet family. No wonder I can't find any love for quinoa. I don't like beets either! Aaargh!!

What 's horrible is that I really want to love quinoa. When other food bloggers mention a new recipe with quinoa, I want to be just as over the moon about it as they are. But deep down I'm thinking, "Wow, that sounds really gross." Sorry! It's true.

So a few weeks ago, out of the blue, I get the January issue of Bon Appetit magazine in the mail. Joy and happiness! Talk about a nice surprise! I didn't find out until a few days later that my Godmother bought me a subscription for Christmas. Thank you again Aunt L!

As I was looking through the magazine, I saw a recipe for a breakfast cookie. Yum! With quinoa. Hmmm. Could this be good maybe? The recipe called for the quinoa to be cooked first, then added to the mixture. Could that eliminate the texture problem? I pondered the idea on Facebook, then decided to try it.

I followed the recipe pretty closely except for that I didn't have white whole wheat flour, so I just used all-purpose. Also I used walnuts instead of almonds. I had the cookies for breakfast this morning. The texture is rather healthy. The taste is pretty good, but they are bordering on rubbery. *sigh*

Would I make them again? Maybe. I'd cut the amount in half, because it makes two dozen.  G hasn't tried them yet and if he doesn't like them, that's way too much for me. (Update: He loves them!) After a few days, the texture could get more rubbery.

They are a good energy food though and would be a nice snack to take with you instead of buying a granola bar. They would be especially good to take with you while traveling. Oh, and speaking of travel, I have another article in the January issue of AAA Horizons Magazine. You can read it here online, if you are in Southern New England.

Well, I still have my quinoa complex. Can't quite shake it. Maybe it's time to move on to millet.

A Canadian Foodie said…
I have been making a breakfast cookie for a few years - sans quinoa, but it probably isn't as healthy, either, and I rarely eat it for breakfast. Love the ending! Let's see what you do with millet!
:)
Valerie
1/10/12, 10:56 AM