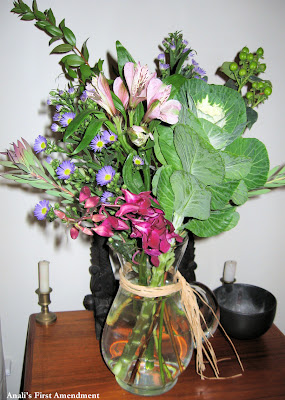 My exercise coach told me that I deserved these flowers. Okay, not exactly.

Recently I joined a health study that helps African-Americans in the Boston area increase their exercise with the help of a telephone exercise coach for three months. So far so good.

Who would think that just calling in and receiving encouraging words from a computer would make a difference? I guess it's my own conscience guiding me with that extra nudge. Which apparently was what I needed. I did miss my exercise goal a few times. I felt really horrible.

But my coach, while only a computer, talked me through it and suggested that I give myself a reward for that added motivation. The first time I missed my goal, I ignored the reward suggestion. How silly does this exercise coach think I am!? I'm a logical person and don't need a reward system!

Well, once again, the coach seemed to be right. One of my favorite things is to buy fresh flowers. So when I missed my goal the second time, I denied myself flowers that I would have bought otherwise. What could it hurt to try? Maybe it would work. Obviously I needed help.

I'd have to earn flowers as a reward. As silly as it sounds, I've been steadily increasing my exercise goals and exceeding them. Now I don't know how this will pan out over the full three months or for years to come, but I know that I had stopped exercising like I used to and it was not a good thing.

One thing that I've added back is my weekly yoga class. That's actually a reward in itself.  And I'm back on the treadmill. Not a reward like yoga, but it's beneficial and I do feel better afterwards.

Last Saturday was Small Business Saturday and I decided to get my reward! Usually I buy my flowers at the grocery store, but I decided to look for a local small business to support. Mantis Plants and Flowers is right in Wollaston and I had passed it a million times, but never went in. This time I went in.

I spoke to the owner, Alan. What can I get for around ten dollars? No more than fifteen. For me that's a big splurge. I said that I wanted something interesting and different. He put together, what I think is just the prettiest bouquet and it was only $12.50 with tax!

The vase is mine. It was my Grandmother's years ago. I love the greens and purples in this arrangement. So creative! There's some kale, St. John's wort, and eucalyptus in there too. Alan was very friendly and definitely knows how to put together a beautiful yet affordable flower arrangement. If you're looking to purchase some flowers or plants, give him a call!

I'm still enjoying these flowers and hopefully will for the next week or so. Until my next reward. I exceeded my most recent goal! Yay!