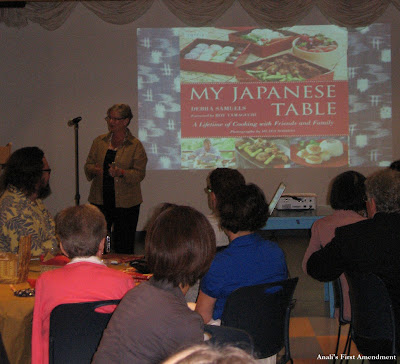 Last week I got schooled. It's September, so the timing was right!

What did I learn? About obento and the fine art of making lunches in Japan. Cookbook author Debra Samuels spoke about her latest cookbook, My Japanese Table and I learned far more than I could have imagined.

Her love for Japanese food and culture started when she was an exchange student in college and traveled to Japan. Since then, she has immersed herself in the cooking and traditions.

We had a chance to try some obento too. Everything was so good! I learned that in Japanese homes, food is presented beautifully, not just at restaurants. Samuels said that balance is key and noted the importance of different colors on a plate. Balance isn't just about color, it's also about a variety of flavors. 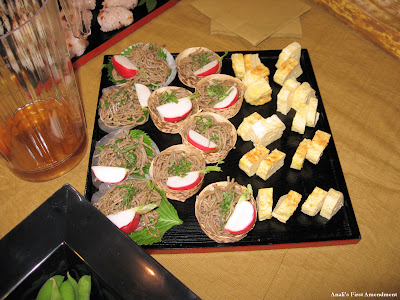 A fun part of her presentation was when she showed the difference between a lunch that an American mother might make for her child and the lunch that a Japanese mother would make. The difference was striking.

You can probably guess the American lunch. A sandwich in a brown paper bag, with an apple, some pieces of candy and a handwritten note from mom with love. While it was made with love, as the note indicated, it probably didn't take too long to prepare.

Obento takes hours to prepare. The bento box which holds the food is adorable. Take a look at this Flickr pool to get an idea. The food is cut and arranged to be even cuter. Apparently teachers look at obento as a gauge as to how things are at home. So if the obento isn't as colorful or cute as it used to be, it might be a sign that something is wrong. No slacking allowed!

"Food must look like there is an effort made," says Samuels. In American culture, it's more common for a mother to tell her children that she loves them. But in Japanese culture, instead of saying the words, a beautifully arranged obento is a way for a mother to show her love.

While I didn't purchase the cookbook, I did look through it. The pictures are beautiful and the recipes look wonderful. There's also a very nice dessert section at the end. For dessert, we were served mochi that was prepared by Erino of Mochi Kitchen. We had a chance to chat and she's just as sweet as the dessert that she made! 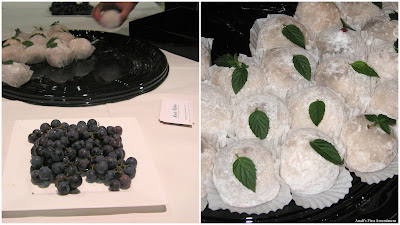 Samuels said that for six days straight, she cooked through 20 recipes each day with her food stylist, photographer, and a group of Japanese women who checked each dish for authenticity.

The latest culinary trend is obento, according to Samuels. And it makes sense. Not only is it cute, healthy, and portable, but it's green. The box is reusable, so no wrapping or extra packaging is needed. Nothing to throw away.

And obento isn't only for Japanese food. It can be made with any type of food. It's the "obento spirit" that counts. Take some food. Fit it into the box. Then present it beautifully. Sounds good to me.