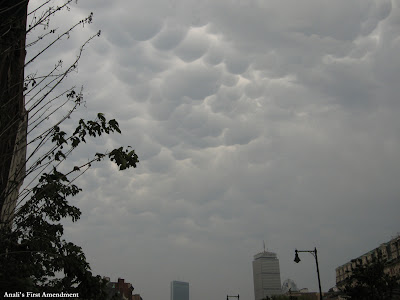 What a difference a few days or even a few hours makes. When I came out of the store and looked up, I was shocked by the sky. I have never seen clouds like these before. Ominous is an understatement. They look explosive.

I took a few pictures and was happy to go underground to catch the T. While there were no tornadoes in Boston that I know of, at least two tornadoes touched down in the western part of the state and four people were killed. Hopefully the number won't go any higher.

The day was stormy and rather scary. Massachusetts is under a State of Emergency and the National Guard was mobilized to help with search and rescue. We really don't know how to deal with tornadoes in this part of the country. With global warming changing weather patterns, I guess that will have to change.

*Updated 6/2/11* Thanks to a kind comment about this picture on flickr, I've learned that these are mammatus clouds. We really dodged a bullet in Boston. I think we were even closer to having a tornado than we realized.

So So Simple said…
Hi Lisa I was thinking of you we got news of the weather and I believe some people were killed. How weird.
6/2/11, 3:46 AM

Lisa Johnson said…
so simple - Hi Gilli! Thanks for thinking of me. It was pretty crazy. No tornadoes here in Eastern Mass., but the thunderstorms were horrible! I just saw on the news, that one of the victims was a mom protecting her child. So sad...
6/2/11, 11:42 AM

Lisa Johnson said…
suldog - I wasn't outside too long during the height of it, so I didn't notice the feel so much. I guess I was focused on the clouds and getting underground.
6/2/11, 1:05 PM