Dorothy Height: The Passing Of An Icon 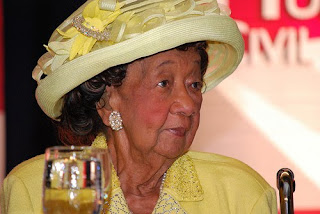 Dorothy Height died today. I had to take note of her passing. To think about her life and all that she contributed to the world.

For nearly fifty years, Ms. Height lead the National Council of Negro Women. Below is an edited portion of her history from the website.

Dorothy Height was born in Richmond, Virginia March 24, 1912, and educated in public schools in Rankin, Pennsylvania.

1937 was the turning point in her life. She was serving as Assistant Executive Director of the Harlem YWCA when Mary McLeod Bethune, founder and president of the National Council of Negro Women, noticed her. Mrs. Bethune invited Height to join NCNW in her quest for women's rights to full and equal employment, pay and education.

Height served in her dual role as YWCA Staff member and NCNW volunteer, integrating her training as a social worker and her commitment to rise above the limitations of race and sex. She rose quickly through the ranks of the YWCA, from the Emma Ransom House in Harlem to the Executive Director of the Phyllis Wheatley Association in Washington D.C. and to the National Staff.

For thirty-three years - (1944 - 1977), Height served on the staff of the National Board of the YWCA of the USA and held several leadership positions in Public Affairs and Leadership Training and as Director of the National YWCA School for Professional Workers. In 1965, she was inaugurated and became Director of the Center for Racial Justice, a position she held until her retirement.

In l952, Height served as visiting professor at the University of Delhi, India, in the Delhi School of Social Work, which was founded by the YWCAs of India, Burma and Ceylon. She became known for her internationalism and humanitarianism, and conducted international studies and travel to expand the work of the YWCA.

Height made a study of the training of women's organizations in five African countries: Liberia, Ghana, Guinea, Sierra Leone and Nigeria under the Committee of Correspondence.

In 1961, while Height was participating in major Civil Rights leadership, she led NCNW to deal with unmet needs among women and their families to combat hunger, develop cooperative pig banks, provided families with community freezers and showers, etc..

In 1964, after the passage of the Civil Rights Act, Height with Polly Cowan, an NCNW Board Member, organized teams of women of different races and faith as "Wednesdays In Mississippi" to assist in the freedom schools and open communication between women of difference races. The workshops which followed stressed the need for decent housing which became the basis for NCNW in partnership with the Department of Housing and Urban Development to develop Turnkey III Home Ownership for low income families in Gulfport Mississippi.

In l970, Height directed the series of activities culminating in the YWCA Convention adopting as its "One Imperative" to the elimination of racism.

A few weeks ago, on separate occasions, I had the opportunity to see Angela Davis and Maya Angelou speak. I've been thinking about what they said and the issues that are important to them.

Writing a blog post about them has eluded me. How was I going to write about such legends? When I heard the news today about Ms. Height, it made me think some more about all these women.

Because of their efforts, I can move about and exist in this country, in this world, in a much easier way than I could have without them. I guess I'm still thinking and absorbing it all. But I'll write more soon.

Valerie Harrison (bellini) said…
I was watching the View last night and heard about this remarkable ladies passing. She and so many other women have paved the way and made the road a little less bumpy.
4/21/10, 8:38 AM

Suldog said…
I was unaware of Ms. Height until just now. Shame on me.

I am assuming she was black. I know that may sound odd, perhaps ignorant, but the photo is not definitive, to my eyes. And that is what strikes me most concerning the ridiculousness of the whole sorry state of affairs.

When one looks at photographs of older people, the races of the subjects tend to become less distinct. Unless a person has a very dark skin to begin with, and very distinct negroid features, a black person might just be a white person with a tan. Unless a white person has distinctive characteristics, with a bit of color that person could be black. Even such things as slanted eyes become less distinct, and an Asian could be an Asian, but might just be another race with smile lines :-) I suspect if we all lived long enough lives, there would, in the end, be no outward distinction whatsoever between races. How damn silly are we to make so much of the differences when we are younger and more ignorant?
4/21/10, 9:12 AM

Maureen said…
What a beautiful, strong, smart and wise woman. Thanks for sharing this!

Lisa Johnson said…
el - You're welcome! Glad you liked it.

bellini valli - She was, and still is, quite an inspiration.

suldog - Nothing about your comment is ignorant. She was black, but like you said, race is merely an artificial construct when we really think about it. I'm glad that you liked the post.