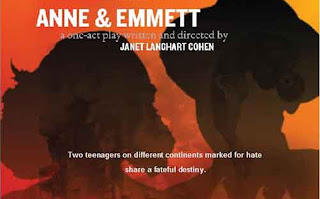 OBIE Award winner Robbie McCauley will direct the play, which was written by Janet Langhart Cohen.

The play's heartbreaking premise imagines a conversation between Emmett Till and Anne Frank. Below is a portion of the description from the play's website.


"To help me understand and articulate the need to find tolerance and harmony in the world rather than hate, I have turned to an imaginary vision of two historic and tragic victims of institutionalized terrorism, Anne Frank and Emmett Till. ...


Through the young, intelligent voice of Anne, we learn what it was like for her and her family to live in fear, to be forced to huddle together with others in a small, confined hideaway, and to cling to hope in their darkest hours as the Nazis came to cart them off to slave labor camps and crematoriums. ...


Emmett was a young black boy (about Anne’s age) who, in 1955, traveled from his home in Chicago, Illinois to visit his great uncle in Money, Mississippi. While there, he committed the unpardonable crime of having whistled at a white woman.


He was abducted from his uncle’s home, savagely beaten, tortured, shot and then, with a cotton gin fan tied around his body, thrown into the Tallahatchie River. When Emmett’s body was recovered several days later and returned to his mother in Chicago, she insisted that his coffin be open during the funeral ceremony. When photographs of his hideously mangled face were published in Jet Magazine, it unleashed a fury in the black community. The photographs sparked domestic and international outrage and served to energize the Civil Rights Movement in America. ...


Anne & Emmett reminds us of the role that race, religion and ethnicity have played in the past and how hatred and the evil of genocide continue to stalk the world. Anne Frank and Emmett Till meet somewhere in time, in Memory, where they are destined to remain locked in a conversation until the chain of mankind’s bigotry is broken by the grace of illumination and knowledge."

There will be five performances of the play. It runs from March 4th through March 6th.