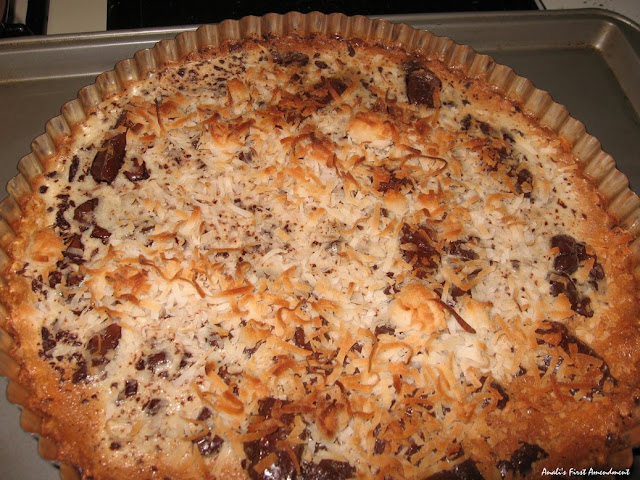 Tart sure has a lot of definitions. For this post's purposes, we'll stick with one: "A pastry shell with shallow sides, no top crust, and any of various fillings."

Last weekend I decided to bake my first tart. A few weeks before, I had picked up a copy of the October issue of Lola. It's a cute little pocketbook sized free magazine that you can find in the Boston area. I still need to grab this month's copy, which is the food issue.

Lola was launched in 2007 by Boston Globe Media and is a nice little publication. It's described as "a lifestyle magazine aimed at women in their 20s, 30s, and 40s." I fit their target for a few more years. Then I guess I just drop off into the ether. Oh well.

I do enjoy it for now. At least some of the content appears to be repackaged from The Boston Globe and Boston.com, where I found the online version of the recipe that I tried.

So back to the recipe. The original is a Chocolate Pine-Nut Tart. And such pretty pictures of it too!

This was my first time using my tart pan. I got it years ago and kept planning to use it, but it just never happened. 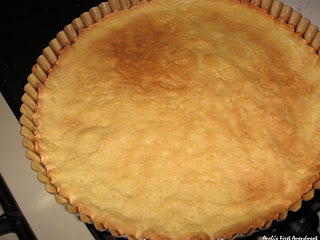 I don't know why I was suddenly so inspired by this recipe, but something clicked. Maybe because I also remembered that I still had really good Sharffen Berger chocolate from the BlogHer conference. Good chocolate is always an inspiration!

I made several changes to the recipe. Like usual, I used Smart Balance instead of butter. I don't normally keep cream in the house, so instead I used half vanilla rice milk and half Nestle Coffee-Mate Italian Sweet Crème. For the filling, instead of using one egg, I used the two left over egg whites. I'm not a huge fan of pine nuts in a dessert, so instead I sprinked the top of the tart with 1/2 cup sweetened shredded coconut.

The recipe isn't difficult to make, but there is some waiting involved. For those of you who have seen me on twitter, you know that I'm a real night owl. I started baking this late and didn't realize that I should have started earlier.

The tart crust went well, but I had to refrigerate it for 30 minutes and bake it for 15 minutes before adding the filling to bake the final tart. When I poured on the filling, it started dripping out the bottom of the pan. I couldn't believe it! I had to grab the tart pan and put it on a cookie sheet to bake it.

Well, the tart came out okay, but I don't think that I'll be rushing to make it again. I made a lot of changes, so the original recipe may be perfectly fine. I was hoping for more of a pudding texture and a thicker layer of it. That just was not to be. Much of the filling leaked out of the bottom, so that could have been it too. Maybe my tart pan is defective?

Well, my first tart experience could have gone better. It didn't taste too bad though. I mean how bad can good chocolate be?

Can-Can said…
You changed that recipe so much that it didn't recognize itself! Ha! Some recipes can be played with but you have to be more careful w baking. I find it best to try a baking recipe pretty straight the 1st time and then I'll see how I might fiddle with it.

I made Brussel sprouts this week in a little low-sodium chicken broth and then I let them brown a bit in olive oil w a smidge of butter (not quite half a pat) and simple pepper and kosher salt. Came out good.
I also steamed white turnips for the first time (usually I bake or cook the giant yellow ones). They were so good. I did a coarse mash. I could easily eat them instead of mashed potatoes some time.
Happy weekend!
11/20/09, 11:48 PM

Tracy said…
The tart looks beautiful, Anali! And you're right--never too, too bad with chocolate--LOL! ;o) But you know, I've had problems with those tart pans with removable bottom--the filling leaking or getting messing. I don't bother with them anymore--got tired of the messes. But what changes you've made to the original recipe. Even if it doesn't always turn out the best on the first go, it's still fun to try. Let us know if you try it again. Happy Week! Oh, if you get a chance to, do stop by--I'm having a gift giveaway to celebrate Thanksgiving week! :o) ((HUGS))
11/23/09, 7:47 AM

Esme said…
This tart sounds great. How are you-I have not stopped by for chat in awhile. What are your Thanksgiving plans? Lots of baking I hope.
11/24/09, 1:15 AM

Your recipes sounds really good! Unfortunately, my vegetables were a bit over-roasted. They still tasted good though.

and so our stories go - Welcome M! Thank you for the kind words. I loved the movie too and had planned to write something up. Oh well. Maybe soon. : )

tracy - I'm glad to know that I'm not the only one to have problems with those tart pans. Maybe I just won't use it again. And it took forever to wash. What a mess!

Thanks for letting me know about the giveaway. I entered!

se'lah - The chocolate was so good! I ate some while chopping it up. Yum!

esme - It has been a while huh? Thanksgiving was good. I baked my usual gingerbread and made some appetizers. I tried a tuna and green apple mousse, which will NOT be a keeper.