The past couple of weeks have filled me with a great deal of nostalgia and reminiscing about my high school and college years. The release of Al B. Sure's first CD in 15 years and Michael Jackson's death caused some major music related emotional highs and lows.

With that mindset, I watched the end of Roger Federer and Andy Roddick's epic tennis match. I was on twitter, when someone tweeted that they were still playing, so I turned it on. I had assumed that it was long over, but they kept going and going like the Energizer bunny.

Federer eventually won, making history, but it took four hours and sixteen minutes. Now a few things came to mind while watching Federer and Roddick. They both have great legs. And Federer is so GQ that I almost can't stand it. He barely sweats and his hair is so perfect. His cut must cost thousands of dollars. I bet John Edwards dreams of having hair like his. Or maybe he thinks his hair is better. G said that he's sure that Edwards doesn't think about it at all. I'm not so sure. 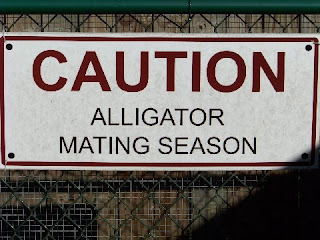 Anyway, one of the things that I noticed about Roddick was what he was wearing.

Remember the little alligator from the 80's? Izod?

G said that he thinks that the label is still big in Europe, but that it just fell out of favor in the United States.

Is that true? Is everyone wearing these little alligators in Europe? I guess the preppy look is coming back. I did see some young guys on the train last year with ice cream colored Izod or Polo shirts with the collars up. Those crazy kids! 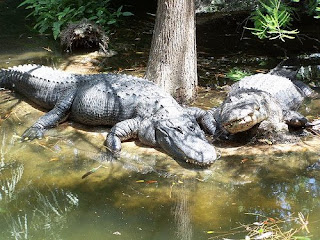 I was preppy in high school and wore those polo styled tops. But then the preppy look faded, Madonna was big on the scene and my style veered more to cut up t-shirts.

Not that any of this matters or is any way important to the rest of my day. By the way, these alligator photos are from flickr, courtesy of Kathy aka kthypryn's photostream.

Just curious, do you have any Lacoste clothing? Have you seen anyone wearing any? And if so, I'm curious which country you were in at the time.

S said…
When I was in Paris, I found Lacoste stores all over. Roddick's been with them for a couple of years now.

And can I just say, I was so disappointed for Andy. He had been basically discounted as a grand slam contender, but he's worked really hard to improve his game in a way that guys at his age don't usually do. It's impossible to root against Federer, but today, my heart really was with Roddick. (As you might recall, I get up every year for the Wimbledon finals, always having strawberries and cream for breakfast.)
7/5/09, 6:00 PM

Esme said…
In Paris there are Lacoste stores everywhere-I even saw people wearing the clothing. I think we have one here in Southern California.
7/5/09, 9:28 PM

gfe--gluten free easily said…
I saw your tweet on lacoste/alligators ... now I know why? ;-) I had no idea they still existed on clothing. LOL Seems like a lot of things that had their hey day here are still popular in Europe ... hmmm, maybe there's a lesson there.

And, I'm with you ... I'm betting that John Edwards is still very obsessed with his hair.

The alligator pics made me think of Chucky who I saw at the Gulf Shores, AL zoo ... The Little Zoo That Could from Animal Planet. Chucky disappeared during Hurricane Ivan, but was eventually found. Chucky is HUGE! 12-feet and at least 1000 lbs!

Like the cherries for July! They make me thing of Geo Washington who was born nearby and grew up in the opposite direction, but still close by.

Lisa Johnson said…
mocha dad - I think I saw it there a few months ago and was shocked. Then I forgot about it until seeing Roddick.

s - I felt bad for him too and he was so gracious about it. He seems like a good guy. And I love that strawberries and cream tradition. Very cool!

willow - I guess since it's new for him, he doesn't have that 80's harking back thing. I remember when I was really young and being excited about a new style and my mother would tell me that she wore the same thing when she was a teenager, so she just couldn't fathom wearing it again. I get it now.

shirley - Glad you like the cherries! ; ) Right before I ate them, I thought, "These are so pretty. Let me take a few pictures." I had no idea what I'd do with them, but it worked out!