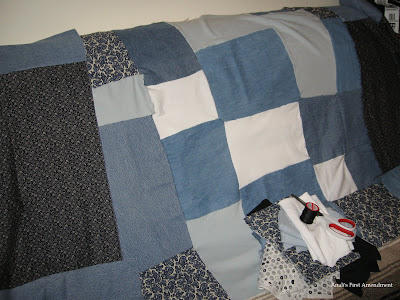 This is going to be another timed post. I'm trying to be more conscious of the time that I spend blogging, because so much of my time gets eaten up this way. I'm spending no more than one hour doing this post.

I've already assembled a few pieces, so hopefully it shouldn't take me too long. I started working on my quilt again. I hadn't worked on it in months, but accomplished a lot last week.

I was going to post some recipes, but things haven't gone as planned. I'll be baking some other things later in the week, so hopefully those will work out better. I rescued some soup broth from this past Spring and made some really delicious pumpkin soup.

Long story short. I was making soup without using a recipe. Throwing in this and that to make a creamy vegetable soup like I had done before. I used too much liquid and it ended up being a horrible mess that I couldn't eat. I didn't want to waste the soup, because I knew that I could fix it given the time and the inclination. However, the weather was getting too warm and I knew that I wouldn't be making soup again until Fall rolled around. So the two containers of soup sat in the freezer all summer next to the often used ice cream maker.

Recently, I sadly took the ice cream maker out of the freezer and put it away. Along with it, I grabbed a container of soup and defrosted it. It was already pretty well seasoned and just needed something to thicken it up.

I added a can of pumpkin, some Smart Balance and a little brown sugar. I cooked them for a bit in a soup pot and made pumpkin soup. Yum!

I also used some pumpkin to make waffles. They are pretty good, but the recipe still needs some tweaking, so I won't post it yet. 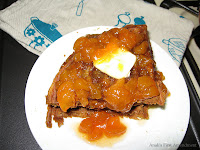 Well, it's an hour and I didn't get to the already assembled part yet. Hmmmm. Interesting.

shilpa said…
Hi anali! Nice post...
I'm working on a quilt too...Its got hexagonal patches..its a design called Grandma's flower patch.
Do you have a cooking blog too? Whats the link ? I just started one..
toomanychefs.blogspot.com
10/15/08, 5:44 AM

You must be way advanced in your quilting. I hope you blog about it, so I can see it. This is my main blog where I do my baking and cooking. It's just not all cooking all the time. I blog about lots of things, especially politics right now.

Susan from Food Blogga said…
I have tried to set a timer for myself when i'm blogging. I usually run over. :( At least it's something I can continue to strive toward. :)