For some reason, I got it in my head, that I could take Route 93 North from Quincy to Rockport. That is most definitely wrong.

Because I have such a horrible sense of direction, I normally have the good sense to print out directions. But I was feeling relaxed and carefree and thought I remembered the basic way to get there. Serendipity would take care of the rest. Well, it did in fact, but we never made it to Rockport and we accidentally left the state.

So G and I are in my Bug cruising up Route 93. The sun is shining and there's a warm breeze blowing. In New England, we savor these days. We store them in our memories and pull them out later in order to withstand the brutality of January and viciousness of February. So we're driving. And driving. And driving. And not seeing signs for any of the towns that are on the coast. Then we we see a sign welcoming us to New Hampshire. Well, that wasn't in the plan.

We decided to go with the flow, since we were in no real hurry. We drove a little bit and exited near Londonderry to find someplace to eat. We were both getting hungry and thought that we could find a hidden gem that I could blog about. I told G that when we found the place, we'd know it when we saw it. And we did. 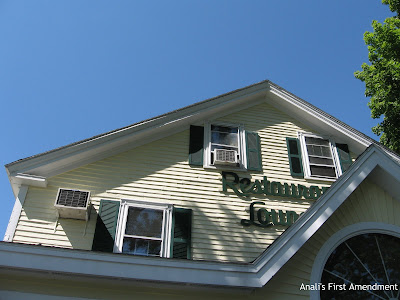 We drove past a few fast food places and some uninspiring looking eateries. Then we saw a bright yellow house with seating on the outside. It looked really quaint, like we could get a good old-fashioned New England meal there. We pulled up and saw that they were serving brunch until 4:00. The parking lot was pretty full, which seemed like a good sign. We walked in and were greeted right away. We decided to sit outside, so we could enjoy the sun. 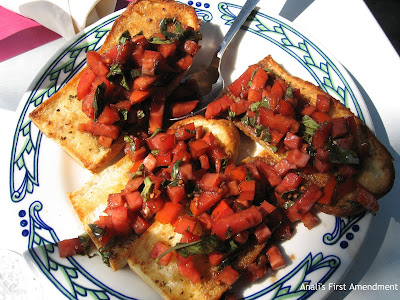 The restaurant is called The Homestead. I really recommend this place. Our waitress was really nice and her timing with the food was perfect. We started with Bruschetta, which was really good. There was more vinegar than I usually like, but it worked.

I have no more food photographs, because G was hungry and was not "feeling" the food photography at that point. Anyway, I had the Crab Cakes and he had the Baked Stuffed Haddock. We shared and both really liked everything. The portion sizes were generous too. Also, their bathroom was very clean. Always a good sign.

After our meal, we decided that we needed to drive South East. Living on the East Coast, if you keep driving East, eventually you'll hit water. We took a very circuitous yet somewhat scenic route. We ended up on Route 128, which is what we should have taken to begin with. *sigh*

We finally saw signs for Gloucester and Rockport. At this point, we were getting a bit tired of driving and decided to save Rockport for another day, so we took one of the Gloucester exits. 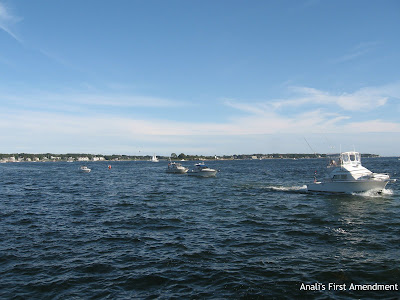 We parked and got out of the car. The wind had kicked up and it was noticeably cooler by the water. I grabbed a scarf from the trunk and wrapped it around my shoulders. We walked around and watched the boats lining up to wait their turns to go under the raised draw bridge. We even saw a boat being pulled by a tug boat. 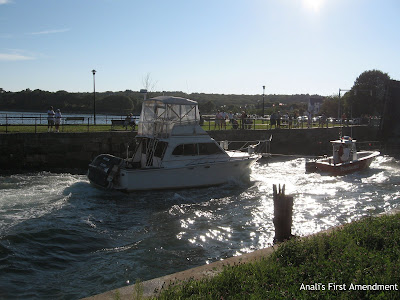 It started to get even colder, so we headed home. I made these chocolate chip cookies and we watched the closing ceremonies for the Olympics. Not a bad Sunday. Not bad at all.

So So Simple said…
Anali
What a lovely old fashioned thing to do A Sunday Drive. It was very boring when you were a kid but as an adult. I loved it. New places, chances for a yummy picnic. Bacon and Egg pie a favourite

Lisa Johnson said…
suldog - Serendipity is a great thing and I just love the word itself too. ; )

so simple - I guess you're moving into Spring soon. Hopefully you'll have some good weather. I just hope we have a mild winter.

Lisa Johnson said…
t. - Thank you for the award! I'll put it up and do a post soon.

mosilager - Yes! The cookies were so good and gone very quickly.

Susan from Food Blogga said…
Oh, just looking at that map makes me all nostalgic. How I miss those lazy, meandering New England drives and wish I could go on one this weekend.
9/1/08, 8:05 PM

Lisa Johnson said…
susan - I had planned to spend some time exploring your old stomping ground, but never made it down to Rhode Island. I don't know how the summer goes by so quickly!
9/2/08, 9:58 AM

amisha said…
that sounds like a perfect day to me! sometimes getting lost can end up with the most wonderful adventures.
xo
9/4/08, 8:30 PM