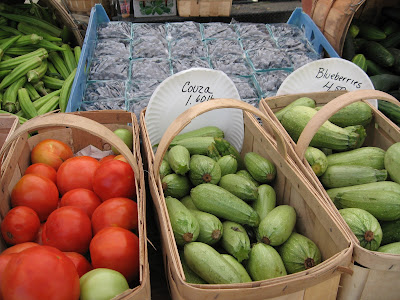 One of these pictures is not like the others. Can you guess which one? Ha! I know pretty lame. Sometimes I just can't help myself. Actually the last one that I included kind of throws things off...

Anyway, last Friday, I finally made it to Quincy's Farmers' Market. My intent was to buy a few things and take some pictures for the 888 Flickr Pool. Here is my submission. I went a few years ago, but don't remember being too thrilled. This time I was pretty happy. Although, I missed the cooking demonstration sponsored by Taste Quincy. And on a side note, the website shows that the Manager of the Farmers' Market is named Anneli! I couldn't help but notice!

Quincy's Farmers' Market hours are fairly limited. According to the website, it's held each Friday from 11:30 to 5:30 at the parking lot across from the Courthouse. I was told that from noon until 2:00, one or two Quincy restaurants prepare food and give out samples. The cooking demonstration is taped and broadcast later on Quincy Access Television. I didn't get the gentleman's name, but he was with the Taste Quincy crew. I know bad reporting, but I just asked him quickly.

I'll have to try and go back soon to see the cooking demonstration. I don't have cable and our Farmers' Market season in Massachusetts doesn't last very long. Time is running out. If you live in the area and can't make it this Friday to Quincy, then next week may be even better.

Governor Patrick declared August 17th - 23rd, to be Farmers' Market Week in Massachusetts last year. I'm not positive, if it's officially the same this year, but I guess we can just go with it. There are Farmers' Markets all across the Commonwealth , so hopefully people will get out and support their local farmers. 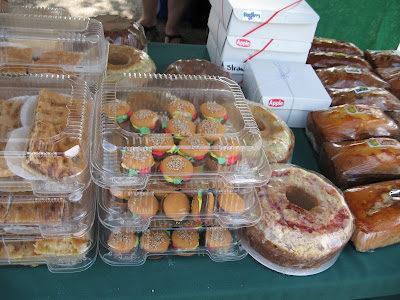 Back to my visit. There was a nice assortment of fruits, vegetables, a few flowers, and some baked goods too. Can you see the cheeseburger cookies here in the package? Aren't they the cutest? They were good too! They were from O’Brien’s Bakery, which is right on Beale Street in Wollaston. 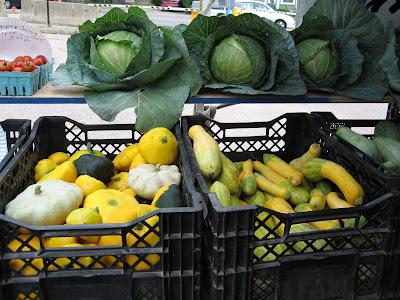 I bought these flowers. I'd like to get some sunflowers next time, but they sell out early. I bought some bread, string beans, peaches, green peppers, and two Zephyr Squash, which are these long green and yellow squash in the picture above. I used the green peppers in a stir-fry with some onions that I served with chicken, but I didn't take any pictures. I still have to cook the beans and the squash. Maybe I can make something tonight.

The peaches were some of the juiciest that I've ever tasted, but they weren't very sweet. I cut them up and put them on some oatmeal with raisins, almonds, brown sugar and some Trader Joe's Organic Blue Agave Sweetener. It was really good. 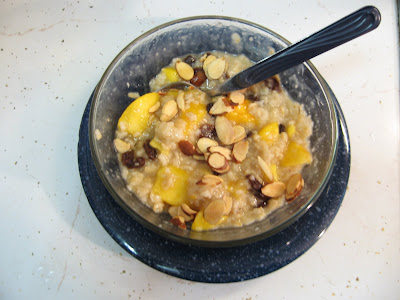 So that's my post. Sorry I mislead you about the tomatoes. But I'm sure you'll forgive me.

Dezel Quillen said…
Great shots Anali! And to think, I walked past two farmers markets this week and paid them no mind. The one nearest me (less than 2 miles) opens tomorrow and I will make an effort to stop by and get some local fruits and veggies. Maybe I will find some of those cheeseburger cookies too!

Liz Dwyer said…
For a moment I was wondering why there's not much time left for farmer's markets -- and then I realized that it's going to be cold for you all pretty soon! I forgot because we have farmer's markets year round. We're so spoiled out here.

Lisa Johnson said…
los angelista - The first time that I started reading about all the farmers markets on blogs, it was in the winter and I knew that those people didn't live around here. I get so jealous when people talk about them and it's February!
8/15/08, 8:07 AM

Kerry said…
Lovely shots of the offerings at your farmer's market!

Lisa Johnson said…
kerry - You're welcome! I didn't get to the Farmers' Market the past couple of weeks. Hopefully I'll get there this week. I'll submit another post when I do.