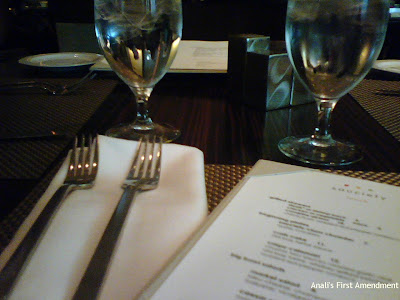 Today is my two year blog anniversary! I cannot believe that time has passed so quickly. One of the best things about blogging is meeting so many new fun people.

Yesterday I had the best time meeting up with another one of my favorite bloggers. T from the blog Notes of an Anesthesioboist! T is just as lovely and fun as I thought she would be from reading her blog. She's an anesthesiologist and writes about work, but she also started playing the oboe and writes about that too and all sorts of other interesting things. She loves to travel and has a sweet tooth just like me. We were both completely on the same page when it came to the menu. Dessert! That was our number one priority.

But first I have to tell you how we ended up where we ended up. You know I'm always having random adventures and yesterday was no different. Okay, so of course I was running late and ended up having to drive instead of taking the T, otherwise I would not have made it into Boston on time. I was hoping that I'd be able to find a parking space in the garage near where I work, but it was full. So I called T and asked her if I could pick her up in front of the cafe where we had planned to eat. We could then decide what to do. I felt so bad, because at this point, T has never met me and I'm really just a random person and she suddenly had to get into my car.

Well, my Beetle isn't very scary, so she hopped in anyway. We were in the middle of a ton of traffic and it took about three tries just to make it through one light. I suggested that we head over to the Fort Point Channel area, because there are supposed to be a lot of restaurants and there would be parking. So it's grey and foggy and rainy out and we're driving down Summer Street.

T noticed that there was a Westin Hotel with a parking garage. She said that they usually have really good restaurants. So we pulled into the garage, go upstairs and ask if they have a restaurant. We were directed to Sauciety. Now we had planned to just have a simple lunch and all of a sudden we were going to a really nice restaurant with well-dressed business traveller type people. We were both dressed rather casually. Neither of us even knew there was a Westin there. The interior is really pretty - wide open spaces with trees and very modern furniture. 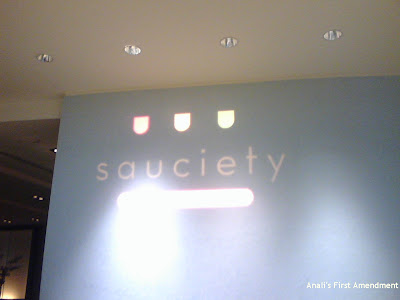 Because T is anonymous on her blog and we didn't plan on any fine dining, I didn't bring my camera. I was just going to take a few shots of our meal with my camera phone, so these aren't the best pictures. By now I should know to always bring my camera no matter what. Lesson learned again!

At this point, we are laughing and can't believe the little adventure that we've had and that we wound up at The Westin. It was so incredibly random. We spoke about how sometimes in life you end up in a place far different than you ever planned, but that maybe you end up where you're supposed to be. So we were meant to be in elegant surroundings.

When you walk to the entrance of Sauciety, instead of a regular sign, they have the name projected in lights on the wall. It looks far better than my picture. We asked to look at the menu. We were given the lunch menu, which looked fine, but we were both rather alarmed that we didn't see any dessert. We asked about it and were given a dessert menu. It looked amazing! T decided on the crème bruleé trio and I knew that I had to try the cappuccino intrigue.

So based on the dessert, we decided to go in. Again, with our focus being on the dessert, we decided to use our calories wisely and split the market salad with champagne vinaigrette and the crispy calamari. I just can't get excited over salad when there's dessert to talk about, but the vinaigrette was quite tasty. The calamari was good, but extremely salty, so I only had a few pieces.

Oh and I almost forgot about our waiter! He brought us the bill while we were eating. Isn't he supposed to upsell with dessert? Maybe he was so disappointed in us, because we both only had water for drinks and we split appetizers. So we told him we wanted dessert and he gave us both very disapproving looks. That was really odd. Did he think we didn't deserve dessert?

Anyway, we got our desserts and they were both wonderful! I don't think I can quite capture the intrigue of the cappuccino intrigue. When you get to the middle, you suddenly see the chocolate sauce dribbling out. Ah, the intrigue! It was so fun! I especially wanted to capture it in a picture, but maybe when T writes up her post, her pictures will be better. She did bring her camera. So that was my lunch adventure with T. I hope we can do it again soon.

*Updated* - T has written up a fun post about our meet-up. Read it here.

T. said…
Just got home from one of the most stressful workdays ever and got totally cheered up by your post. I had such a wonderful time, Anali! Thanks for your kind words. Your pictures actually turned out better than mine! Let's do it again, ok?
4/29/08, 7:24 PM

Liz Dwyer said…
Weird waiter but how fab that you all got to meet each other and spend some time having an adventure in pursuit of dessert.

Babz Rawls Ivy said…
Congratulations on 2 years Blogging! What's your secret to commitment? Your meal looked very de-lish! Very chic! I am so happy you shared this experience. There are a few bloggers I am aiming to meet and soon!

yes i feel you on getting excited about salad over dessert..

however there is this place in dc called java green and they have the most amazing salad i've tasted yet which has grapes, strawberries, blueberries, dried cranberries, almonds, mozzarella, greens, ..i add avocado and tuna and they put this berry vinagrette...AMAZING!

Suldog said…
Congratulations on your 2nd Blogging Anniversary! Here's hoping we have you around for many more!
5/1/08, 9:34 AM

BipolarLawyerCook said…
Happy blogging-versary! And many more! My husband actually had a similar experience at Sauciety-- his office is nearby and they tried it out a month after it opened. Same weird service, same uneven quality. Same good desserts. : )
5/1/08, 11:30 AM

Cakespy said…
Aww, this made me so happy!! It looks like this was a lot of fun, and congrats on two years! I was surprised at the strong community I found when I started a blog but really love and enjoy it. :-)
5/1/08, 12:58 PM

Lisa Johnson said…
t - I'm glad that the post cheered you up. I'm definitely looking forward to our next adventure! ; )

los angelista - It does seem that our society is very fear based. Trusting does feel good. Especially when it's so richly rewarded!

Lisa Johnson said…
nance - I agree that you can't go wrong with a creme brulee. It's always a palate pleaser!

lovebabz - Thanks! I have no secret except for that I really love blogging. Mostly I find that I can't stop myself. It's harder NOT to blog than to blog.

Lisa Johnson said…
suldog - Thanks! I think I plan to stick around. :D

bipolarlawyercook - Very interesting about that place. Well, at least the dessert is good.
: )

Anonymous said…
You've been blogging for 2 years already? Wow, impressive. My blogging self wasn't even conceived 2 years ago. Congratulations!!

Coffee and Vanilla said…
Happy Aniversary to your blog Anali :)

Lisa Johnson said…
zen chef - The time does fly! Thank you! Meeting fellow bloggers is probably the best part. It's so fun to be with people who "get" why you're taking pictures of all of your food! : )

Lisa Johnson said…
amisha - Thank you! I'm so happy to know you too and I'm looking forward to our future blogmeet one day. I wonder what it will be?

(I was going to say "here's to another 20!" and then I thought, wait a minute, who knows what blogging will evolve to in, say, five more years.

Anonymous said…
Happy Anniversary, Anali! Your post reminded me that my anniversary came and went last month... I must post about that tomorrow.

Lisa Johnson said…
fenix - Thanks! And you're so right about the time. I cannot even imagine what technology will bring in 20 years! :D