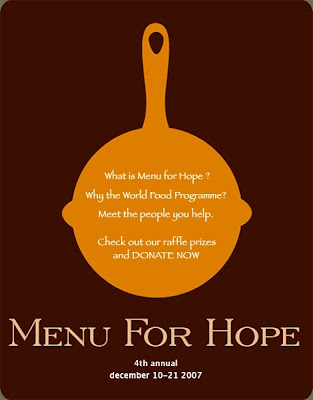 What is Menu For Hope? Click here for a better explanation than I can give. But basically Menu For Hope is a worldwide fundraising event by food bloggers in support of the UN World Food Programme. This year is the fourth year of the event and last year $60,925.12 was raised.

This year the money raised is earmarked to go specifically to the school lunch program in Lesotho, Africa. Lesotho was chosen, because the money used will go to local Lesotho farmers who practice conservation farming methods to feed the children.

The money is raised by asking for a donation starting at only $10.00. This will buy you one raffle and you can choose to enter to win one of the many culinary related prizes - from baked goodies to cookbooks, to appliances, cooking lessons, to spending time with a favorite food blogger or chef. There are a ton of prizes.

Depending on how many raffles you purchase, I think you could win even more than one. Here is a list of the prizes donated by bloggers from all over the planet and the rules. There are new prizes constantly being added. I'm very new to learning about this event, so I purchased a raffle and I'm wishing for the KitchenAid mixer and cookbook!

I've been thinking about donating something too. If I had known more about it sooner, I would have tried asking some companies to donate something. I've always liked fundraising. But it's a bit late for that, so I could bake something or a few things and give them away as prizes. Or give a baking lesson? Would anyone be interested? If that would motivate buying raffles to support such a worthy cause, then I'll figure out what I need to do to oficially sign up. Let me know!