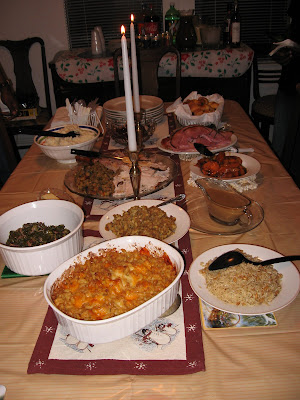 Today wasn't as hectic as I thought it would be. I decided to take it easy for most of it. I baked my gingerbread and just lounged around until I went to my Aunt D's house. It was a fairly small gathering for our family, only about eleven of us, but it was still really nice to see the people who were there.

The picture above is our dinner. My mom made the turkey with cornbread and oyster stuffing, which I love. She also made her famous macaroni and cheese. Macaroni and cheese is a HUGE part of all of our holiday meals. For a long time, I had always assumed that everyone had it. Over the years, I've spoken with co-workers and friends about their holiday meals, and from the people that I've spoken to, it seems that always having macaroni and cheese is an African-American thing, which I find very interesting. Our spread was so good! It was so nice for my aunt to have us all over, because she really didn't feel very well. 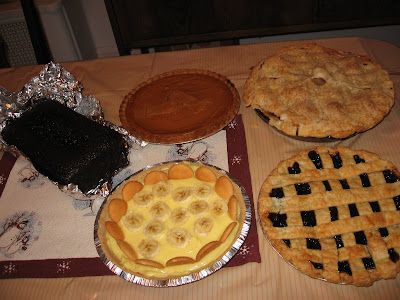 For dessert, I made gingerbread, but it didn't taste as good as usual, at least to me. I realized that the type of molasses makes all the difference in my recipe. I bought Trader Joe's Organic Dark Molasses and don't like it. The gingerbread comes out a much darker color than usual and is kind of bitter. I bought two bottles of it. One bottle of it is almost gone. I'm debating about returning the other. I'm trying to revamp the recipe to make it healthier, so maybe I'll just use this up while I'm testing the changes. I'm very surprised, because I usually have such good luck at Trader Joe's. I'll go back to the molasses that I usually buy - Grandma's and Crosby's both work well.

The other desserts were delicious! My Aunt D made an apple pie, pumpkin pie, and mincemeat pie. My cousin K, who is 16 and plays football made the beautiful banana cream pie. I just found out that he made a cake last week too! He's becoming quite the baker.

I'm thankful that I was able to spend Thanksgiving with my family.

BipolarLawyerCook said…
Looks delicious. I love that your teenage cousin bakes.
11/23/07, 7:03 AM

Michelle | Bleeding Espresso said…
Yum! I think I would've done dessert first...that banana cream pie is calling me but I'd definitely have a slice of each. Wouldn't want to be rude ;)
11/23/07, 8:11 AM

sognatrice - I did have a slice of each! Just a sliver, but a sliver of each was still too much! Now I'm detoxing for the next few days.

As a white guy, I found it odd the first time I heard about macaroni-and-cheese as part of Thanksgiving; definitely not an Irish thing!
11/26/07, 1:03 PM

Lisa Johnson said…
suldog - Looking back, it's kind of funny how I assumed everyone had it!