Tell Me Something Good

Rufus and Chaka Khan - Tell me something good

Early last week, I had to do some errands in Coolidge Corner, so I made a run to Trader Joe's. As I was standing in the aisle with soap and lotion, I noticed the music. It was Tell Me Something Good by Rufus and Chaka Khan. I just saw on her website that she has a new CD coming out on September 25th called Funk This.

Chaka sounded good back in the day and she sounds even better now. As soon as that song came on, I was immediately smiling. How can you not smile listening to this song? There was a woman in the same aisle who felt the same way, because she busted out singing, swaying and bopping to the beat. Sometimes you just can't hold in the music! Has this ever happened to you? I was humming in my head and probably had a bit of a bounce to my step too.

I just tried a new Blogger feature , which makes it much easier to blog music. I hope you enjoy this video from Soul Train. So kick back and enjoy or get up and dance! 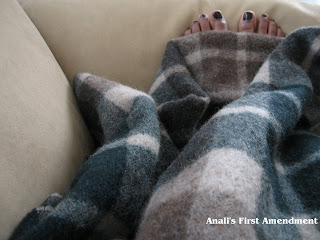 I had a leisurely morning and have accepted the reality of the cold weather. I turned on the heat for the first time and snuggled under my blanket while enjoying CBS News Sunday Morning with a nice cup of coffee. I love this show! I think they are interviewing Queen Latifah next week. She also has a CD coming out on September 25th, called Trav'lin Light. The 25th is going to be a big music day!

CapCity said…
HOW can u NOT smile when u hear that song!? I LOVE Chaka! The last time I saw her live was on a ski trip...after the show my "friends" were all critical: "did u notice, chaka couldn't remember the words to her own songs?" i thought: she didn't NEED to remember - if u were all grooving & singing along as I was u wouldn't have nothin' but love for her! Her drawbacks are MINOR to me!

Lotus Reads said…
What a great post, Anali! Love the picture of your toes peeking out of the blanket...I would love to have a morning like that one of these days. Things have been rather rushed at our house because we've had guests from Sydney, Australia, but things are settling down again.

I love the idea of music videos on a blog...going to have to try that blog feature soon.

Suldog said…
I've always liked Chaka Khan, even though my taste usually runs to metal and hard rock. Also - MY WIFE and I watch "CBS Sunday Morning" every week, without fail. A fine show, with a little something for everyone. Now when we watch it - when you watch it - we can do so knowing that there's another classy person tuned in :-)
9/17/07, 12:37 PM

Tera said…
Music means a lot to me. Admittedly, I get a bit irritated that it's not as good as it used to be, but I love music and good beats!

Hmm..that sunday morning sounded awesome...i love snuggling under the sheets while watching tv or reading when it's nippy outside..but it's also better when there's that special guy to keep you even toastier... :)

Lisa Johnson said…
capcity - I've never seen Chaka, but I think I'd have a great time at her show! I wonder if she'll tour again with her new CD coming out?

jac - So you've been spotted singing in the aisles? ; )

big boys oven - You have good taste all around!

lotus reads - On Saturday, I had a mini-spa day and got a mani-pedi, so I had to show off my pedicure! ; )

jennifer - Lucky you! I'm following you on Twitter and cannot wait to see your pictures when you get back! You must be having so much fun with your new camera!
9/17/07, 10:28 PM

suldog - I guess all the best people like that show! ; )

aviana - It was a very nice morning!

Thanks so much for this! I love this song and it takes me back to my college days when this song always seemed to be playing in our house!

David Sullivan said…
That was great!! I used to love "Soul Train". My hard rock, stoner friends gave me the moniker "Disco Dave" because I listened to all kinds of music and they classified anything with a funky beat disco. One of the best songs to get "down to business" to is "Ain't Nobody"!!!
9/18/07, 7:41 PM

So when I see a cooking segment on there, I'll know you're enjoying it too! ; )

nicole - Ciao! You are quite welcome and thanks for stopping by! This song really does take us all back! And I guess the whole world is watching Sunday Morning!

Anonymous said…
Big Chaka fan too. In fact, "I Feel For You" is one of my all time favorites.

Babz Rawls Ivy said…
Honey, Chaka is grown folks music and I am glad to know there are grown folks who dig her as much as I do. I think Queen Latifah has grown into a very strong and confident Sister. And CBS Sunday Morning is a Sunday Must! of course as I am getting ready for church :)
9/21/07, 9:29 PM

Lisa Johnson said…
lovebabz - Welcome! LOL! I agree about Chaka and Queen Latifah. It's been amazing seeing the Queen's reign over so many years. I remember blasting "Fly Girl!" I so admire her. What an amazing lady.
9/22/07, 12:53 AM

ammu said…
I looove this song too!!