A Post Noir - For Dorothy Parker On Her Birthday 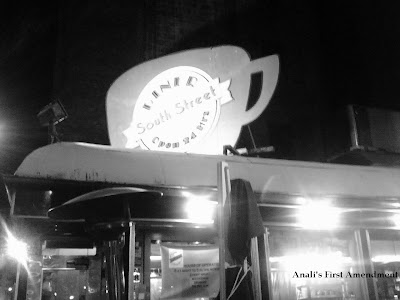 My twenties were my most tumultuous decade. At least so far. Full of much angst and despair. At the time, I was listening to a lot of Prince and loved the song The Ballad of Dorothy Parker. Something about the song is really hypnotic and I wondered just who was Dorothy Parker. I don't remember exactly when it was, but one day I found some of her poetry and immediately loved it. In her words, she captured what I had often felt. I knew that I wasn't the only one to feel so badly, especially when it came to matters of the heart. She had a quick wit, sharp mind, and felt my future pain even though we both existed on this earth at the same time for a few short years. 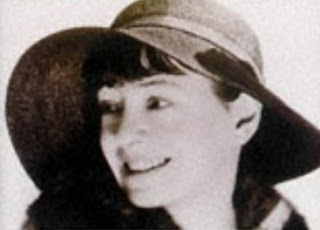 Dorothy Parker was born in New Jersey on August 22, 1893 and died on June 7, 1967. I found this picture of her in her Wikipedia entry. Besides her poetry, what I found fascinating about her is that she left her entire estate to Dr. Martin Luther King Jr. After he was killed, her estate was transferred to the NAACP.

I love her poem below, Symptom Recital from The Collected Poetry of Dorothy Parker.

I do not like my state of mind;
I'm bitter, querulous, unkind.
I hate my legs, I hate my hands,
I do not yearn for lovelier lands.
I dread the dawn's recurrent light;
I hate to go to bed at night.
I snoot at simple, earnest folk.
I cannot take the gentlest joke.
I find no peace in paint or type.
My world is but a lot of tripe.
I'm disillusioned, empty-breasted.
For what I think, I'd be arrested.
I am not sick, I am not well.
My quondam dreams are shot to hell.
My soul is crushed, my spirit sore;
I do not like me any more.
I cavil, quarrel, grumble, grouse.
I ponder on the narrow house.
I shudder at the thought of men....
I'm due to fall in love again. 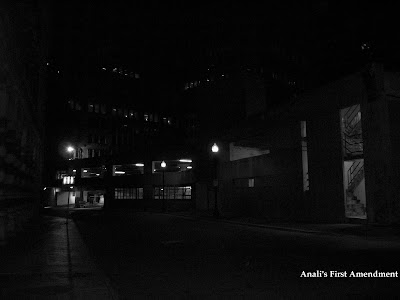 Dorothy Parker was a great talent, but she was also deeply troubled and made several attempts at suicide. There is a pretty good movie about her life called Mrs. Parker and the Vicious Circle starring Jennifer Jason Leigh. I just watched the movie, Double Indemnity for the first time, which is a great film by the way, and sets the standard for the film noir genre. The music is moody, there are lots of shadows and the cruel and gritty side of life is highlighted.

When I thought of Dorothy Parker's poetry and life, it reminded me of those films, so I thought that I would adapt the film noir genre to a new genre of blog post. The post noir. Noir is black in French and I couldn't help but think of my prior post about the color black. It all seemed to fit.

I took some night pictures around the city and converted them to black and white to try and get that same noir feeling. I was hoping for something special. Out of the blue, these two old cars appeared the two nights in a row that I was taking pictures, so I was able to take a bunch of shots of them. It was almost surreal. Like the cars just appeared from a different time. I'm sure there is a very rational explanation to it, but I like the mystery. 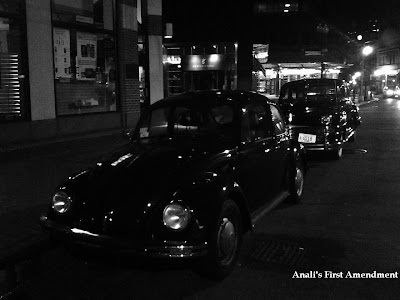 Happy Birthday Dorothy Parker. This post is for you. Rest in peace.

Nance said…
Love Dorothy Parker, esp. her poem "Penelope", which I teach to my AmLit kids. She was quite a brilliant woman, ahead of her time in so many ways. That photo is very arresting, Anali. Nice work.
8/22/07, 8:52 AM

Lisa Johnson said…
nance - I'll have to look up that poem. She was way ahead of her time. I think that's part of what made it so difficult for her. Glad you like the pictures! ; )

Suldog said…
Dorothy Parker may well have been the funniest woman who ever lived, albeit viciously sarcastic. A couple of my favorite Parker quotes:

(From a review of a play starring Katherine Hepburn) "She runs the gamut of emotions from A to B."

Cynthia said…
This is a moving post Anali. Loved what you did with pics and the 2 cars coming out of nowhere... what great images one can capture through the lens...
8/22/07, 4:20 PM

BipolarLawyerCook said…
Love Parker, love the photo ideas. I feel the need to copycat you (with full attribution in the event I publish them, of course!). Hope you're not having a noir day.
8/22/07, 7:30 PM

CapCity said…
thanx for that education, Anali. As widely read as I think I am I'm glad to know I can still learn something new. Not surprised that she attempted suicide several times - that poem was a bit disturbing - or should i say evidence of a disturbed soul. Will definitely look into her other creations.
8/22/07, 9:00 PM

Tsiporah said…
I had never read any of Dorothy Parker's work. The poem you shared really spoke to me because I feel the same exact way. It's funny to think that other people feel the same way you do about things. I mean I know everyone has their issues and hang-ups, but no one likes to really share them. I don't know I am probably not making any sense.

Your pictures are awesome!!I dabbled in photography in high school, black and white photos are my fav.
8/23/07, 7:54 AM

Lisa Johnson said…
suldog - Love those quotes! Thanks for them. You're so right about her, funny, but ouch!

cynthia - Thank you so much! I love my camera!

bipolarlawyercook - Thank you! I had so much fun working on this post. Please feel free to copycat! And I have no doubt that proper attribution will be given counsel! ; ) Actually I've been having a really good week!

capcity - You're welcome! Her work is definitely not all happiness and cotton candy, but neither is life. She has a great use of rhythm in her poetry. I haven't read much of her other type of works, but I want to look into them further too.

tsiporah - I think it really helps to know that other people feel the same way sometimes. And you are making sense. I think being in your twenties is a really difficult time. It gets better!

I'm glad that you like the pictures. I'd like to see some of your photos on your blog. Are you taking many? I love how I see things differently when I'm thinking about them for a picture. It makes even the mundane seem exciting to me.
8/23/07, 11:08 AM

How have you been? well nice to know about dorothy parker...it is interesting to know she left her entire estate to dr. martin luther king. ...who would have done that?....maybe people have and they have not been noted...but since i know of her she is to be commended.....

jac said…
Thank you for sharing Dorothy with us.

I never heard about her but when I read her lines, I was in another world. I am now searching and reading all her stuff from the net.

I loved, well still do, that song by Prince. As you well know, Prince rocked back in the day! I did know a little about Dorothy Parker, but you just piqued my interest some more. Thanks for the information, I want to dig deeper now, and even go and find the song again. Thanks for the blast from the past!

Also, I like your B&W photo work – you know I have a soft spot for Bugs. When I was a poor little chap flipping burgers at Jack in the Crack.... I mean Box; a VW Bug was the 1st car I purchased that ran. I had many after that – they were fun and unique.

Have a great weekend friend - I see we have been eating well! LoL

Lisa Johnson said…
aviana - LOL! Welcome back! It is interesting finding out where people leave their money and it's pretty amazing that she left her money to MLK and now the NAACP, so they have an endless source of revenue, because people are always buying her books, etc. I do wonder how they choose to use all that intellectual property. That would be the coolest job figuring out how to grow that money on the creative side. I'd do a bunch of cool cards, calendars...

dezel - Prince rocked back in the day and he's still doing it! It's funny that one of the cars is a Bug considering how much I love them. They are great little cars! I hope you are enjoying what's left of the summer!
8/24/07, 12:51 AM

Lotus Reads said…
Oh Anali, I loved Prince too, but, shame on me, I can't remember this particular song!

Having said that however, I, too, have received a lot of my education from songs...I remember first learning about Rasputin, the evil Russian preacher, from the Boney M song, "Ra Ra Rasputin". And then,my first exposure to Van Gogh was from Don McLean's song 'Starry,Starry Nights". How about "Bangladesh" by Joan Baez, it so eloquently told the story of Bangladesh's fight for independence from Pakistan. I could go on and on, perhaps I should just write a post!

Lisa Johnson said…
lotus reads - That sounds like a great post! I hadn't really thought about it that way, but I guess we do receive a lot of information from music, which is good or bad depending on the music. My mom loved the song "Starry Nights" and used to say how it made her so sad when she thought about Van Gogh. It is a beautiful song and the more I learn about Van Gogh, the sadder I feel when I hear it.
8/30/07, 10:53 AM

amisha said…
what a beautiful post. i don't know much about dorothy parker, but this poem and what you've written (love that she left her estate to dr. king) makes me want to learn more! thank you for sharing this l!
8/31/07, 3:17 PM

Anonymous said…
Thanks for the read. I tumbled across your blog while searching for links between Dorothy Parker and the song by his purpleness with the same name. I just can't see any resemblace but the name.
4/4/08, 12:27 PM

Lisa Johnson said…
anonymous - Welcome! Thanks for stopping by and the kind words. I tried to figure out the same, but came up empty too. But if it hadn't been for his song, I might not have been as curious about her. I hope you come by again. ; )
4/4/08, 12:32 PM