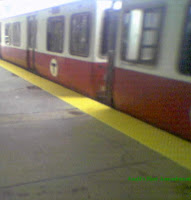 I cannot vouch for the accuracy of the information that I'm about to tell you. It's based on a conversation that I overheard on the Red Line coming home from work on Friday night. It might be all lies, but it's kind of fun to speculate anyway.

There were no seats available, so I stood sort of in a corner in the back of the train. A man was speaking very loudly to a woman about how she looked familiar to him. He asked if she went to the clubs. I'm sure I had a smirk on my face when he said that. She said not for about seven years. Then he started naming some of the clubs that he used to frequent. I didn't recognize any of them, but she did. He said that he was 49 and she said that she was too, so they were probably hanging out around the same time. An old school reunion right here on the train! He asked if she was married, but sadly for him, she said that she was.

Then he said that he was a singer and he used to play at these clubs. He mentioned that he has a gig coming up on August 4th and 5th at the Italian Festival in the North End. He said that he'd be singing with his group on the 4th at the corner of Commercial and Hanover Streets. And the next night, Lisa Lisa & Cult Jam would be playing. I was already listening, because I really didn't have a choice, but I was almost ready to jump in! I used to love them back in the day! And I'm sure that all of you Lisas out there remember when everyone started saying your name twice!

I looked up the Italian Festival and found this website, but couldn't tell who would be performing. The dates do sound right though; there is a celebration happening. I looked up Lisa Lisa and found her website here. The Wikipedia entry said that she has a new CD coming out soon on the Boston based record label, Mass Appeal Entertainment. I did a Google search and found a website for them, but it didn't appear to be working. Her website does say that a new CD is on the way. Anway, that's what I heard.

And here are links to some video classics. I Wonder If I Take You Home and Can You Feel The Beat.

Lotus Reads said…
Two places I could not do without because of the service they render in keeping me up-to-date with the happenings around town are my local hair salon and riding the subway! :) That was an interesting bit of information you picked up, Anali, are you planning on checking out the Italian festival?
6/25/07, 7:44 AM

Mizrepresent said…
Now see, i used to love me some Lisa-Lisa and Cult Jam, she ought to start touring again. Those old school bands are whats going on now!
6/25/07, 9:36 AM

Who would have thought that we would become lovers
As friends we were so, so tight
Can't help myself, you make me feel so right


Yes, all the LISAS or all the LILIS should know this anthem!!!!

So So Simple said…
Anali
What a busy person you have been it has taken me an age to catch up on all your interesting blogs.
You certainly deserve to be a Thinking Blogger.
Go for it.
6/25/07, 10:07 PM

Sharon said…
Anali what an interesting story... I'm around that age also but not familiar with that/those bands. I like how you bring everyday life into your stories.
6/26/07, 1:34 AM

Lisa Johnson said…
lotus reads - I definitely would like to go! There are festivals in the North End just about every week and I always plan to go to a few every summer, but I haven't been recently. I need to get over there to eat really soon!

tera - I used to love that song too! She really had a lot of hit records! I need to get a "Best Of" CD!

mizrepresent - It looks like she just might be! Hey if it's true, then you heard it here first! ; )

Lisa Johnson said…
jennifer - LOL! I'm glad to help out! And wasn't that around the time that Janet Jackson was wearing her keys as jewelry too? Never did quite catch on...

dj black adam - I remember hearing some serious mixes of that song. I used to burn some serious calories dancing to her music!

nance - I have such good memories of this music too!

so simple - Thanks! I have been posting a lot lately! ; )

cynthia - Ooooh ooooh ooooh aaaah! I love that beat! I can't get this song out of my head now! ; )

Dezel Quillen said…
Man, I still have a crush on Lisa Lisa - now you have me going over to itunes to check out some old school Cult Jam !