Recently I received an invitation from Jimmy Tingle's comedy show to see his current show and to possibly blog about it. I saw him perform once a few years ago and thought he was really funny. To put it all on the table for you, I did accept free tickets for my friend and I to attend his show. Regardless of the free tickets, we loved it!

I don't want to say too much about it specifically, because one of the best things about a show is not knowing exactly what you're going to see. First though, some of you may not be familiar with Jimmy Tingle. He grew up in Cambridge and has been doing stand-up comedy since 1980. He does a lot of political comedy and is definitely on the liberal side of the fence. 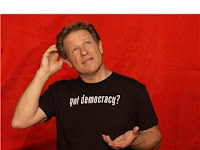 Here are links to his blog where you can see some video of his show and find out more about tickets. Check out his website too.

His current show, Jimmy Tingle's American Dream, ends this week, but you can still get tickets for Thursday, Friday, and Saturday night. I think you'll enjoy the show. One very cool thing is that he owns the theater himself. It's his piece of the American dream. The theater is located in Davis Square in Somerville, which is a nice area and has some great restaurants. A year or so ago, I went to Gargoyles on the Square and it was wonderful. If you're a tourist and visiting Boston this summer, it's worth going across the lovely River Charles and checking out the Cambridge and Somerville area too.

The Off Broadway Theater is not only a place for Jimmy Tingle to perform, but he is hosting other acts as well. I'm especially looking forward to seeing Colorstruck: Boston's 8th Annual Women of Color in Comedy tour. They will be performing August 17 - 19. Here is their blog.

Now let me tell you a little bit about the show. Whoever did the lighting did a great job. The use of light to punctuate what he is saying is really effective. The theater is very small, only 200 seats, so it's very intimate and Jimmy likes a lot of audience participation. He speaks very frankly and with much emotion about the peaks and valleys in his career, especially the period where he did commentary for 60 Minutes II on CBS. Things didn't work out how he planned, so he left California and came back here to make things work back home. From what he says, he seems to be starting from scratch and building things up again. He talks about the war, religion, spirituality, our government and all the issues effecting our lives every day. Even though it's pretty heavy stuff, he makes it all hilarious.

Oh, and before I forget, one of the weirdest things of all. While I was driving to the show, running late and in a rush down Newport Avenue in Quincy, I see a burning bush on the side of the road - right in front of Wendy's. A burning bush! Immediately, I wonder if God is trying to tell me something! Anyway, I told my mom and she said I could look at the "Bush" in two ways. And after thinking about the show where he was talking about religion and politics, as bizarre as it was, it was strangely appropriate.

Tera said…
Wow, that bush would have freaked me out too! I would have delved deeper into the meaning of a "burning BUSH." Hmmmmmm....

It sounds like he covered some pretty good topics! I love comedians who are pretty well versed on what's going on...Chris Rock is good at that too!
6/26/07, 1:28 PM

Thanks for the heads up about Jimmy Tingle he sounds like he puts on a great show. One day I hope to get up to your neck of the woods and explore. I will definitely keep his theater in mind.
6/26/07, 6:55 PM

Nance said…
The burning bush and in front of a Wendy's! Did you know that restaurant chain may be put up for sale soon? It's been in some trouble lately with weaker-than-expected sales and has had plummeting stock prices. They've even had to close their very first restaurant in Dublin, Ohio. Your burning bush omen was quite the oracle.
6/26/07, 11:02 PM

Nina said…
The burning bush would've freaked me out and I most likely would have headed home.

Asha said…
I am not familiar with Jimmy Tingle although I wouldn't get bothered by "burning bush"!Yesterday I saw live lit Cigarette butt under the bush here too!;D
I am still on vacation but posted 2 photos,see if you can guess where I am!:)
6/27/07, 9:02 AM

Lisa Johnson said…
suldog - Yeah, Peggy and her kin are not the ones to make plans with this time around!

tera - I guess there's a triple entendre just screaming to be heard too, but I'm not going there! ; )

tsiporah - You're welcome! I hope you make it up this way soon!

cynthia - Such a shame! I hope you get to plan another trip!

nance - I didn't know they were having problems. Strange omen indeed!

nina - LOL! I was totally freaked out! I was on the phone at the time and must have sounded like a nut! I started talking about the smoke, then the burning bush on the side of the road! I do keep my friends amused though. ; )

asha - That's probably what happened! Someone probably threw a cigarette out their window. It amazes me that people do that so often and don't seem to care about the ramifications.
6/27/07, 12:03 PM

Anonymous said…
i had no idea Jimmy Tingle was in our backyard! I've seen him on tv and thought he was very funny. the video clip on his website is hilarious. And he owns that theater? Sometimes i think i must be livin' in a cave. thanks for posting this anali...
6/27/07, 4:22 PM

karrie said…
We were given a free pass from a guy on the street in Davis a few weeks ago, but did not make it.

Gargoyles is great. Love the weird, inventive use of things like edible packing peanuts and gravy master as ingredients. :)
6/29/07, 7:36 AM

Lisa Johnson said…
jennifer - He's right in our hood! ; ) And he does own the theater, which I was pretty impressed with. You're welcome!