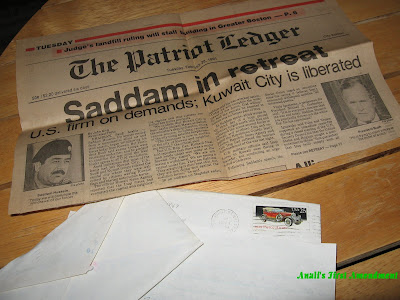 I've been reading in the local news lately about the USS John F. Kennedy's arrival in Boston today. This aircraft carrier is making its last trip to Boston before it's decommissioned on March 23rd in Mayport, Florida. I pulled out an old box filled with things from days past looking for some letters that I had received from a crew member. I found this newspaper clipping dated Tuesday, February 26, 1991. It's really strange looking back at this now.

In 1990, several ships, including the USS JFK visited Boston for the 4th of July. I don't quite remember exactly how it all happened, but some friends and I went out and happened to meet a few of these young gentlemen. Long story short, I'm a big letter writer. Wow, this was before email. I'm actually still a big letter writer. One of the few. Anyway, I exchanged addresses with two of the guys that we met and said that I'd write them. My two friends also exchanged addresses and we all kept in touch by letter for a few years.

One of the guys that I wrote was on another ship and sent me a letter with this cartoon on it. It's quite poignant. The more things change, the more they stay the same. 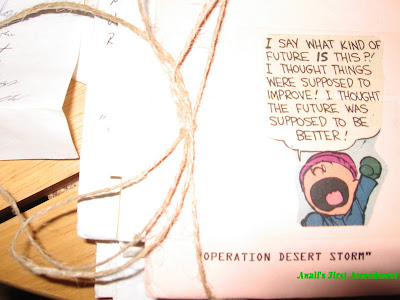 I found another letter that was postmarked November 1990 from the USS JFK. Here is part of the letter with some minor edits for clarity.

"What's up? Well nothing much here is happening. Just sitting here giving you some thought. Don't worry they were pleasant thoughts. Well anyway I really don't have too much to say because we just left the Red Sea and are on our way to Italy. Then we should be in France for Thanksgiving hopefully.

I wish I had a little more good things to tell you, but there is nothing going on. We have been in the Red Sea for the last 45 days. It is hot, but we run a tight ship and know how to overcome rough situations.

Well enough of that. Don't even think I get a lot of letters or write a lot, because the truth is I don't get enough letters or write enough. Just how many is enough? Well out here if you go more than 3 days without getting a letter things get lonely and sad pretty quick. But everyone out here is doing fine and is in good condition. And things are starting to look up for the home team."

I don't know what happened to my friend. We lost touch, but I hope that he is okay. It makes me think of all the military personnel who are away from their families and friends hoping for letters and emails now. I can't imagine spending so much time at sea. But I just wanted to share some words and thoughts from someone who lived aboard the USS JFK for a period of time. A bit of history is coming to a close with the decommissioning. It served our country well. Thank you to all who have served aboard this fine ship.
Email Post
Labels: Boston Kennedys military USS JFK

amisha said…
what an interesting story. that cartoon moved me very much... a bit depressing to think about, isn't it? and how wonderful that you are still a letter writer. i am trying to keep it up too!
3/2/07, 12:41 PM

Lisa Johnson said…
asha - It is pretty grim that we are still dealing with the same issues. History does repeat itself.

suttonhoo - You're welcome! Glad you liked it.

amisha - Thank you. I hadn't thought about these letters in quite some time. Funny how memory works.

There is something wonderfully old-fashioned about letter writing. I love buying really nice stationary or making my own sometimes. I can definitely see where you would be into that being the crafty girl that you are!
3/2/07, 4:58 PM

Mosilager said…
I haven't written a letter in ages. Used to be a big letter writer back in the day. Now I just refer people to the blog if they ask how I'm doing ha ha.

Your post reminds me of friends whom I lost touch with. I think about them often and wonder if any of them went in to the military. They would have been the right age to be on the front lines of the Kargil war.
3/2/07, 8:46 PM

Lisa Johnson said…
mosilager - LOL! It's funny when people ask a question about your life and from the question you can tell whether they have been reading your blog or not.

Have you tried Googling any of them?

kuan gung - Thanks for the kind words.

Mosilager said…
yes - but none of them seem to be on the internet at all. these are friends i had when i was in grade 7 so and then lost touch... so maybe i don't even remember their names right.
3/3/07, 7:19 PM

Lisa Johnson said…
mosilager - Sometimes I find that when I think of people, I suddenly see them out of the blue. Maybe that will happen with one of your friends. I hope! : )
3/4/07, 3:56 PM

Mosilager said…
now that would be lovely - it has happened actually, but just when i was visiting nyc / dc. don't think any of them would end up in rural america
3/5/07, 9:57 PM

wheresmymind said…
Ted K. set up some special tix for the 9/11 families for last Friday...I stood in line for 2 hours then once I stepped foot on the JFK they cancelled tours for the rest of the day
3/5/07, 10:01 PM

Lisa Johnson said…
mosilager - You just never know. My brother once saw someone he knew in Canada.

Mosilager said…
just had a friend describe a moment like that here to me - he met somebody he knew from years ago from a different continent in the supermarket here. so you are right as always :)
3/8/07, 12:22 AM

Anonymous said…
It is so funny that I found your site. I also met some sailors from the JFK when they were in Boston for July 4, 1990. We were at the Hatch shell waiting for the fireworks and met a group of them. My roomates and I exchanged letters with them. I ended up in a serious relationship and was very upset when the JFK was sent to the Red Sea in 9/90. I know that the letters and pictures, as well as the care packages I sent kept his morale up. I was in Norfolk, VA for the big homecoming in March, 1991, but we ended up breaking up by the fall of that year. But overall, such fond memories! Thanks for bringing them all back to me!
5/15/07, 11:47 PM