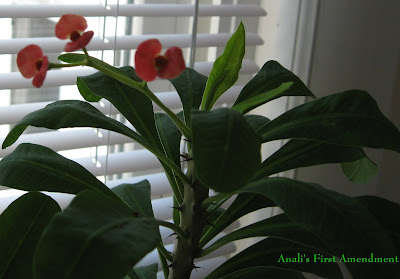 These flowers began peeking out at me last week and now they are in full bloom. This plant is one of my favorites and always gives me hope for the future, even after I've given up. It started out as a cutting from one of my aunts. I planted it, but it was literally a stem for seven years. No leaves, no branches, nothing. A Charlie Brown stem of a plant. The plant that it came from was full with these little red flowers all over it. I couldn't understand what I was doing wrong. It just wouldn't get full and wouldn't bloom. I was heartbroken.

Out of the blue, after seven years, all of a sudden there were little branches and then flowers. I don't know how or why it happened like that, but it just bloomed. I felt that it was a good sign and that maybe it meant that when it seems like my life is just standing still, things are blooming under the surface and I just need patience until the good stuff appears. Every February, I notice the sun gets really bright and after months of no flowers on this plant, one day they are there and it's such a nice surprise.

This reminds me of a Valentine's Day... Wow, I just realized that it was twenty years ago. It was one of my first real jobs after college and I was doing customer service for a financial services firm. There were about ten of us on our team, and we were all pretty young and just starting out.

Anyway, it was Valentine's Day and for some reason, all the men on our team chipped in and bought roses for all the women on our team. So we were each given a single long stemmed rose. I though it was just the nicest thing. So unexpected and thoughtful. I'll always remember it. I wonder if these guys know how much it meant. Twenty years later and I still remember. How sweet is that?
Email Post
Labels: plants unexpected Valentine's Day

amisha said…
hi anali! beautiful flowers... i love the idea of 'blooming under the surface'. my grandmother has a plant that blooms only once a year, in the middle of the night... the rest of the year she tends it so carefully and then it makes its spectacular show.
2/12/07, 8:31 AM

Mosilager said…
Nice picture and lovely story. It's a good idea, I should try it sometime, didn't know flowers held such significance.
2/12/07, 8:53 AM

starry said…
That is amazing.blooms after all these years.I think it teaches us to be patient and never give up.All this plant needed was a chance to show you that in due time you would love it.
2/12/07, 12:58 PM

Lisa Johnson said…
amisha - Hi! Your grandmother's plant sounds so cool. What is the name of it? I do find that my plants help me with my patience, which is an ongoing "issue" of mine. LOL!

asha - Thank you! Yes, the timing was perfect!

sai - The small things really can be huge. I guess because they aren't necessary, so it means that much more.

starry nights - I'm glad that I waited and didn't just throw it away. I was tempted several times! I really didn't like looking at a stem in a pot.