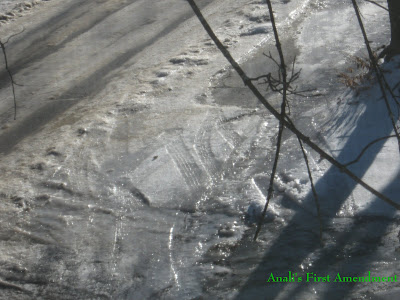 I am not a Vanilla Ice fan, but my parking lot and the sidewalk leading to it are a sheet of ice. I imagine that if there is ever a tsunami here, then living on a hill will be a real bonus, maybe even save my life. During this hellish ice storm, I pray every day that I don't fall and kill myself.

Wednesday as I was walking outside my apartment during the end of storm, my landlord's son, K, was shoveling the snow from the steps. I had planned on walking to the T, because I didn't want to deal with driving in all the mess. I stepped off the last step onto the sidewalk and almost fell. So I stood there paralyzed with fear. Should I try and walk? How long can I stand here? It was freezing and raining ice. Would that be ricing?

K said he would shovel a path to the street, so I could walk. I don't even remember if he did, but I know he offered. I was afraid once I got onto the street, I'd still fall, because I had to walk down the hill, then further down in the walk, I have to walk up and down more hills. It's a great walk, but not on ice. So I'm standing there and I start babbling to K how I don't know what to do. If I fall and break something, I'm in trouble. I have nobody to help me, and I live on the second floor. I don't have any paid sick time where I work. I won't be able to pay for my health insurance if I can't work. All this stuff is spinning in my head and I'm freaking out. So K says, do you want me to just give you a ride to the T? I happily accepted. And I was able to walk home from the train later that night. That was my Valentine's Day.

When I went to leave for work yesterday morning, the ice was even worse. I was able to walk on the lawn to my car, because the snow on it was crunchy and had some traction. K drove up and was trying to get rid of all the ice, but said that the stores in Quincy ran out of salt. Great. I drove to work and parked in the garage in my building, because I couldn't deal with anything else.

I leave work last night and I'm all psyched for Ugly Betty and Grey's Anatomy. I'm driving down Newport Avenue and in front of me see one of the biggest potholes I've ever seen in person. I couldn't move or stop in time and my car just fell in it. I saw my hubcap spinning off in front of me, then the hubcap took a left and made a U turn. I pulled over. Got out of my car, ran into the street and retrieved it. I was so happy that I was able to get it. So I put it back on the tire, which appeared normal. I get in my car and start driving and it's not so normal anymore. Why did it not even occur to me that my tire was flat? I pulled over, got out of my car and saw the flattest tire that I'd ever seen in my life. And the hubcap had gone missing again.

I called AAA and they said that someone would be there in under three hours. It was freaking freezing out. The wind was whipping and the wind chill was probably in the single digits. I decided that I would try and get my car across the street into the North Quincy T station and park it there, call a cab and deal with this in the morning. I drove over, called a cab, then called and cancelled the AAA call. Then I get a call saying that the AAA guy is already there and looking for me. I look up and see the truck in front of me. If I hadn't moved my car, I wouldn't have seen him! So, I cancelled the cab and my spare tire was on within five minutes.

When I got home, not only was the sidewalk and parking lot still ice, but the lawn was now frozen over into ice as well. I tried to walk and slipped. I made it from the parking lot to the sidewalk and it was taking forever. I gave up, sat on my butt and slid over to the stairs. That was the only way I was not going to fall.

Now, I'm going to get a new tire and then go to work. I fear I will have to do the same thing to get to my car, but it will be a bit harder, because I'll have to slide uphill. God help me and bring Quincy some salt.
Email Post
Labels: North Quincy T rant winter weather

Suldog said…
AAA is such a magnificent investment. I've been a member for years and it's one of the best buys I've ever made.

karmic said…
Anali.. you take care out there will ya?
Took me 2-3 hours to clear our walkway, driveway and acrs of all the frozen stuff. And ofcourse the stores in Wilmington are out of salt as well.
2/16/07, 1:05 PM

Nance said…
I hear you, Anali! We had a blizzard for Valentine's Day: 18 inches of snow, subzero windchills, two more days off of school. The sun is out today, but everything is scary cold and starting to get icy. I, too, am fearful of falling. Take care and don't be embarrassed to ask for help! I'll lean on anybody who lets me rather than risk breaking something, and I'll wait a LONG TIME for someone to come by, too.
2/16/07, 3:47 PM

starry said…
Anali that was an ordeal.Thanks for AAA. have never regretted being a member. I am an ugly betty fan too.I hope it warms up and the ice storm is over.Take care.
2/16/07, 4:34 PM

Anonymous said…
Saw your post over at Universal Hub. Totally feel your pain; no salt anywhere, and even with all the plowing my landlord did, it's still treacherous to get to my car.

I'm so sorry you had such a rough couple of days.

I wish I had something witty to say to maybe lighten the icy gloom of your hilly ice adventures - but alas, my brain - like our streets, is glazed over.

Margie said…
Hi Anali
It's been a while since I have been here....
Just now getting around to visiting all those who stopped by while I was away from blogging.
Thank you so much for your visit, and prayers for my brother.
He is getting help!
What an ordeal with all that ice!
Scary!
Hope it's better now!

Lisa Johnson said…
suldog - I just upgraded my AAA after my recent fiasco. It is a great investment. That's a good idea about a treat for K, but he doesn't live here and I only randomly see him every few months.

sanjay - There must be a run on salt! In desperation, I ended up pouring half of my Trader Joe's Sea Salt on the ice. So sad. I don't think that is what Joe had in mind for his salt! : )

asha - We are finally thawing out here, so things are looking up! Have a good weekend!

nance - I admit that I can be hesitant to ask for help, but I do accept when it's offered! I'm so happy that all my bones remain intact! : ) I hope all your snow is starting to melt away and it is getting warmer.

starry nights - It's now the melt after the storm - finally! I'm so happy that I was able to get home and watch my Thursday night TV!

Lisa Johnson said…
kuan gung - I'm going to look into the Yak Trax, which I think might be similar.

the thinking black man - I'm doing okay today! There is melting! And I just had a Hill Street Blues flash back! LOL! : )

suttonhoo - I'm definitely going to look into the Yak Trax. I guess they are pretty popular. I don't know why I never heard of them before...

peter n - Things are better today! You have a good weekend too!

Lotus Reads said…
Oh dear, what a day you had Anali, hope things are better now. I feel so grateful that while we got dumped with a lot of snow atleast it was the white fluffy stuff and not ice! Please take care!
2/17/07, 5:07 PM

amisha said…
oh, you poor thing... hope the ice clears up a bit! as a southerner i was freaking out reading this... ice scares me so much! i can imagine how stressful it would be to have to deal with it every day (in florida, they would cancel everything if there was ice or snow!!).
thinking of you...
2/17/07, 6:01 PM

Lisa Johnson said…
lotus reads - Things are better! It was above freezing today and will be for the next few days!!

amisha - I'm a born and bred Northerner and ice still freaks me out!! It is getting better though and I ordered some quilting books from the library! Maybe I can make a simple quilt before the winter is over...
2/17/07, 9:07 PM

Sai said…
Oh you poor thing! This reminds me of my Ann Arbor days.....aaarghh how could Quincy be without salt??????

Lisa Johnson said…
sai - I guess there was such an ice emergency that stores in most cities ran out of salt.