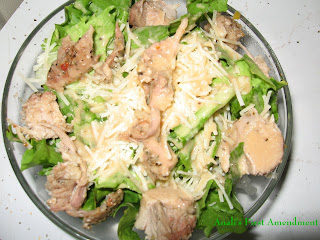 Okay, let's be real. I'm not going to lie to you. We all know what I'm about and it's not salad. I love desserts. Bread makes me giddy. Give me pasta and I'm absolutely delighted. Sure, I truly enjoy some nice soups and vegetables, but it's not how you will capture my heart.

But then I was shown the light by Molly at Orangette. Well, not personally by her obviously. I'm just one of thousands of readers. But her post last week convinced me that I was wrong. So I went to the store and bought some escarole. I wonder if there was a sizeable increase in the sale of escarole last week? Supermarket retailers are probably wondering what happened. I guess it would be the Orangette effect. There must be something about the letter O...

Anyway, I decided that I would also try and make my own salad dressing from scratch. I put some sea salt, ground pepper, grapeseed oil, mayonnaise, and vinegar in a small bowl, then whisked until combined. I didn't measure the ingredients, so that's the best that I can do for a recipe. The vinegar that I used is a little different. The flavor is D'Anjou Pear. I bought it when I visited Truro Vineyards on the Cape. You can read about that here.

The dressing is really good and I think that I'm going to make my own salad dressing from now on. For the salad, it was all escarole for the greens. This was one big leap of faith! I added some chicken and Asiago cheese, then topped with the dressing. It was great! Escarole has a very mild flavor and is less bitter than most salad greens that I've tasted. I'm not one to get excited about salad, but I did have fun with this one.
Email Post
Labels: bloggers food unexpected

Asha said…
Looks yummy Anali.Whenever I have Salad for lunch,it feels so good for some reason unlike any other.

I love Salads too but I don't make dressing though.We love Thousand Island from the bottle!;P

Thanks for the dressing recipe.I might try and see how homemade dressing tastes,looks great.
2/26/07, 2:51 PM

starry said…
Anali..don't know what escarole is.But I love salads , have never made my own dressing ,just store bought or sometimes without a dressing.
2/26/07, 5:26 PM

Nance said…
Is it pear vinegar? I know d'anjou is a variety of pear. I'm intrigued mostly by the vinegar! I love to make my own salad dressings also. I haven't bought bottled dressings in years.
2/26/07, 9:31 PM

Nance said…
anali, I'm sorry! I just reread your post, and you clearly say it IS pear vinegar. duh. I just got done with some very picky schoolwork, so I must have left some brain cells behind on that.

Lisa Johnson said…
asha - I feel healthier when I eat salad too. Of all people I would have thought you would have made your own salad dressing. I'm sure yours will turn out amazing!

starry nights - I only know that it is a type of salad green. And that it tastes good!

Lotus Reads said…
Anali, I adore salads and am always on the lookout for new and interesting salad dressing recipes. I am going to have to write down yours and also go in search of some escarole...I see the Orangette effect spreading in Toronto, too! :)
2/27/07, 6:10 AM

karmic said…
Thank you for introducing me to Escarole in a new way. :) I have had it before in some form or other. I have gone from completely detesting salads to enjoying them.
2/27/07, 8:42 AM

amisha said…
i've been thinking about escarole since reading molly's post... your salad dressing sounds really good too! must try it out next time...
2/27/07, 9:10 AM

Nance said…
anali--my boys like this one, but like you, i never measure, so you'll have to do some of your famous adapting:

2 oz red wine vinegar
2 oz vegetable or canola oil
2 oz ex. virgin olive oil
1 tbsp. dijon mustard
1-2 tbsp honey, depending upon your taste
salt and pepper to your taste
Put all ingredients into a jar and shake well to blend, or use a hand blender to emulsify.
2/27/07, 3:45 PM

Sai said…
Hey Anali:
I make my own dressing as well.

Lisa Johnson said…
sanjay - Glad to! I find that when I have too many sweets, I start to crave vegetables after a while. It does take a while though. : )

wheresmymind - I wonder why it took me so long to realize this...

amisha - She does have a way with words doesn't she? I guess that's why she has a book deal!

nance - Thanks for the recipe! Honey mustard - yum!