I'm Smitten & Then Not So Much 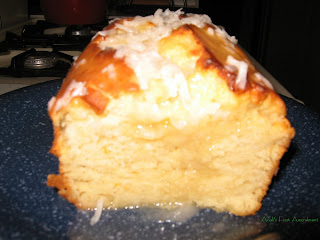 For a couple of weeks now, I've had an old grapefruit sitting patiently in the refrigerator vegetable crisper waiting to be taken out. Tonight was the night. Since I've had grapefruit thoughts filling my subconscious, I was completely smitten, when I saw this recipe on one of my new favorite food blogs, Smitten Kitchen.

The weather here in Boston is insanely cold now. Tonight, the wind chill is supposed to make it feel like between -6 and -12 degrees. When I walked out of my office and to my car, it was painful. When it's cold like this, nothing says warm and cozy like something baking in the oven. And grapefruit reminds me of warmth and sunshine, so I thought this recipe would be nice.

Of course, I adapted the recipe. I used 2 cups of flour instead of 1 1/2, sea salt instead of kosher salt, 1 1/2 cups vanilla yogurt instead of 1 cup of plain yogurt, 2 large eggs instead of 3 extra large. I added 1 T of Southern Comfort, used 1/4 cup oil instead of 1/2 cup. I bought grapeseed oil instead of olive oil the last time I was in Trader Joe's, so that is what I used. And I added 1/4 cup of the grapefruit juice into the mix instead of pouring it over the cake after it was baked.

For the glaze, I used the remainder of the grapefruit juice, which was about 2 1/2 T, plus I added a 1/4 cup of sweetened coconut flakes. I baked the cake for about 1 hour and 10 minutes, because it was still wet at 50 minutes. I cooled the cake for about 15 minutes in the freezer then poured on the glaze. Next time, I'd use much less glaze, because most of it dripped off the cake and onto the plate. I moved the cake onto a different plate and threw away the excess glaze.

I must admit that I only ate about a quarter of a piece. It was too late and I'm not hungry. But what I tasted was pretty good! I'll eat the rest of the piece in the morning. I'm bringing in the cake to the office to share with my co-workers. I have to spread the calories!

And on a somewhat related note, I'm no longer smitten by Isaiah Washington as I said previously here. I'm so disappointed. He has added himself to the list of actors who keep spewing forth venom. Behind that gorgeous face is something that is very unattractive. There are rumors that he may be fired from Grey's Anatomy. I love the show, but if it happens, I guess I can't be too surprised.
Email Post
Labels: baking Boston cake tv show winter weather

amisha said…
thanks for sharing your experience with this recipe! i've been thinking about it the last few days since i saw it on smitten kitchen... odd but appealing :)
1/26/07, 6:06 AM

Lotus Reads said…
Mmmmmmm,the grapefruit cake looks YUMMY, Anali! Going to have to check out "Smitten Kitchen" - we have company this weekend and I'd like some dessert ideas as we all have a sweet tooth!
1/26/07, 9:15 AM

Isaiah; me too.What happens to these people the minute they get a little fame and fortune.GOT to be humble and thankful for what you have and accept others as they are.

Suldog said…
Trader Joe's is the BEST! I went there last night and picked up a boneless leg of lamb that was to die for! Love their wintry blend spicy coffee, too.
1/26/07, 11:35 AM

Nance said…
I absolutely love the way you fearlessly adapt every recipe. You are a Kitchen Warrior! LOL.
1/26/07, 3:53 PM

Anonymous said…
Mmmmm! A piece would taste so nice with my coffee--from TJs, lol--right now.

It is insanely cold here in metro Boston. I do not think our heater heater has stopped running, and some of our far rooms have icy window panes. Brrr!

Lisa Johnson said…
amisha - LOL! I guess it is odd but appealing.

gunfighter - It's ironic that people think it's expensive, when it's actually a lot cheaper than some of your average supermarkets. They just have better stuff. It's like a dream come true! : )

sanjay - It's the best! I need to make another run there soon actually.

wheresmymind - I don't think we will defrost for a few weeks! : (

lotus reads - I definitely recommend it. It's such a versatile recipe. Then again, I guess for me every recipe is versatile! : )

asha - Glad you like it! That says a lot! And I agree live and let live.

suldog - Yum! I haven't tried that spicy blend coffee. I'll have to get some next time.

starry nights - I loved it, but my co-workers loved it too, so you have some unbiased opinions.

jeseem - I'm smitten by your being smitten! I just realized that I love the word smitten. It reminds me of mittens!

Isaiah has lost a whole lot of stock value with me too. This whole homophobic rhetorical ignorance has really diappointed me.
1/27/07, 8:43 PM

Lisa Johnson said…
peter n - Glad you liked it! My mom is better, but very tired. Today is her birthday, so my family did the birthday thing, but she really needs a lot of rest. You have a great weekend too!