Theater In A Blue State 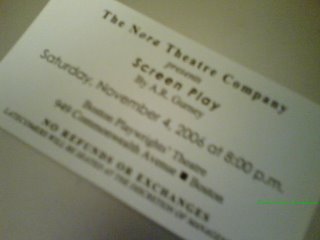 A friend of mine received free tickets to a play last night, and luckily she asked me to come along. The show is called Screen Play and is produced by The Nora Theatre Company.

I highly recommend it. Think about the radio shows from the 1950s, where all the actors stand up in a row and read the scripts in front of them. That's what these actors do. It took a little getting used to, but the play is so well-written and well-performed, that you find yourself lost in the story. And there was a small mishap at the end, when two of the characters sort of fell into some scenery and almost had it topple on them. Luckily, they were able to prevent it and did some quick improvisation so that it was quite comical. Good save!

The play is set in Nick's Bar in Buffalo, New York in 2015. Imagine what our country will be like if we keep on the course that we are on now. Not a pretty sight. Everyone is trying to get out of the country and into Canada, but passports are being revoked. A couple wanders into Nick's Bar. He is a staunch blue stater, fighting for freedom, but he knows his life is in danger. Little does he know, that his wife knew Nick from a long time ago. When we learn about the characters' pasts, we go back to the 2000 election and all that followed.

Although the play is original and set in the future, the old-fashioned radio feel, music, characters, imagery and humor plays on our shared knowledge of the movie Casablanca.

Since we are nearing Election Eve, it was very timely that I lucked into my ticket. Screen Play is all about politics, and showing in Boston, one of the bluest cities in the blues of states, so that gives you an indication of how it is slanted. I'd definitely check out Screen Play. Say it again? Okay, round up the usual suspects, I mean your group of friends and see it. See it for me.

Jeseem said…
saying it 'I would definitely chk out 'screen play' (if ms anali pays for my flight tickets to boston :) )
found a review of the play
http://www.curtainup.com/screenplay.html
interesting
11/6/06, 4:34 AM

Lisa Johnson said…
jeseem - LOL! Yes, your ticket is on its way. ; ) Thanks for the link to the review.

Margie said…
I would love to see this show!
Thanks for sharing about it!
And, I used to live at ...
1576 Commonwealth Ave.

Margie said…
Oh, I meant to ask you...
do you think we'll be cheering tomorrow night?
I am so hoping...I cannot tell you
how much...like an aching!
We have to win!!!!

something from me said…
Sorry I can't vote in the election, but may it go the way you want it to. At least then the election party will be a celebration, rather than a drowning of sorrows.

Lisa Johnson said…
samuru999 - I'm so happy that I was cheering tonight!! Although, the Senate still isn't decided. But Deval won!!! I hope you get to see the show.

Comm. Ave. is a great area, right in the middle of everything.

something from me - I am so NOT for Bush. The man is despicable.