Get Out The Vote!! 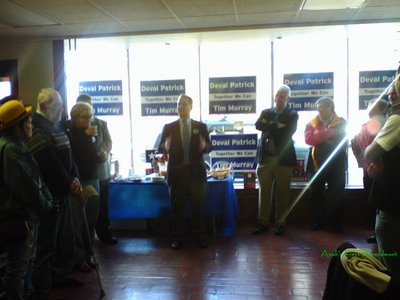 Earier today, I made some phone calls on behalf of the Deval Patrick and Tim Murray Campaign in the Quincy office. As I drove around the rotary in Quincy Center, I saw a bunch of people with Patrick/Murray signs. I also saw some signs saying to impeach Bush/Cheney. I smiled and waved at them.

Quincy Center is always pretty busy on Saturday afternoons, but there were a lot more people than ususal. I ended up parking in the lot for Quincy Public Library.

When I arrived in the campaign office, it was filled with people and really noisy. People making phone calls, standing around talking, and snacking on coffee, donuts and muffins. I found out that Tim Murray, who is the Democrat running for Lieutenant Governor and current Mayor of Worcester, would be arriving shortly. Congressman Bill Delahunt was already there talking with several people as was State Senator Michael Morrissey.

They all spoke about the excitement in the Democratic Party this election, on a local, state, and federal level. I was able to get a quick picture of all of them with my camera phone. From the left, Tim Murray, Bill Delahunt, and Michael Morrissey.

I also received my tickets to the election night party. It's going to be quite an event!
Email Post
Labels: Deval Patrick election Massachusetts Quincy voting

The day the nation demands impeachment is upon us. Sacks and sacks of mail are arriving in congress demanding impeachment via the House of Representative's own rules. This legal document is as binding as if a State or if the House itself passed the impeachment resolution (H.R. 635).

There's a little known and rarely used clause of the "Jefferson Manual" in the rules for the House of Representatives which sets forth the various ways in which a president can be impeached. Only the House Judiciary Committee puts together the Articles of Impeachment, but before that happens, someone has to initiate the process.

That's where we come in. In addition to the State-by-State method, one of the ways to get impeachment going is for individual citizens like you and me to submit a memorial. ImpeachforPeace.org, part of the movement to impeach the president, has created a new memorial based on one which was successful in impeaching a federal official in the past. You can find it on their website as a PDF.

STOP WAITING FOR YOUR MEMBERS OF CONGRESS TO ACT FOR YOU.

You can initiate the impeachment process yourself by downloading the memorial, filling in the relevant information in the blanks (your name, state, etc.), and sending it in. Be a part of history.

Margie said…
Good job Anali!
I am working with Moveon.org, and I will be making phone calls at one of our members house this afternoon, to get people out to vote!

I will be cheering with you on election night!

Anonymous said…
The hour is upon us now, friends, no one can deny us victory if our hearts are in the trim!

Lisa Johnson said…
causal - Thanks for stopping by and for the comments! I'll have to check out that website.

samuru999 - It's getting so close. The countdown begins - 26 hours until the polls close here tomorrow.

gunfighter - It's getting exciting!