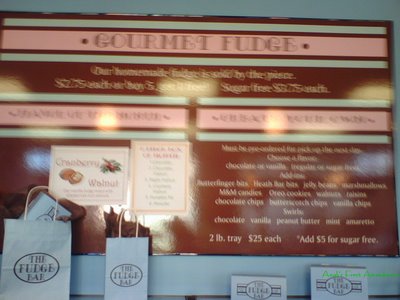 Bug as in my car, not little critters. The Fudge Bar is a very clean establishment. A wonderful place. But I'm getting ahead of myself, let me start at the beginning.

This is my Bug.

I know. I know. This story is sounding very convoluted, but as my law school professors used to say, "Don't worry. It will all come together in the end." And they were usually right.

I'm sitting there trying to deny the reality of what is happening, much like our President, but there is no shutting out reality forever. My car is almost seven years old and I still have the original battery. The little battery light and some others are lighting up. I knew it was only a matter of time. I need a new battery and a jump, so I call AAA.

Even though I wasn't happy with how my day was going, I really could not be mad. I was at home, it was a fairly nice day out and I didn't have to be anywhere. If this had happened last night, I could have been stuck in a parking garage. Or it could be snowing. In all the scenarios for my battery deciding to die, this was one of the best. I went back inside and made some phone calls while waiting. I was told that someone would be there within forty-five minutes. They arrived after forty minutes. Shocking!

So I walk outside and the guy takes my keys, opens the hood and starts looking for the battery. He starts making comments about Beetles and says he doesn't see the battery. He says it must be in the trunk, I said, "No, it's a new Beetle." He ignores me and calls me "sweetheart" whenever he refers to me. He's not condescending about it, just matter of fact and kind of cute, so I let him keep looking and of course he doesn't find it.

He calls in to headquarters and says he has a Beetle and can't find the battery. I tell him again, "It's a new Beetle." He ignores me and keeps talking to the guy. He seems to be on a two-way radio, because I can hear the other guy saying, "We have a Bug jump!"

He finds the battery and jumps it in about ten seconds. I figured I'd better buy a new battery and the laundry would have to wait. Mind you, I'm not wearing my Sunday finest. I had only planned on seeing similarly attired laundry people. Oh well.

I drove to a place near Quincy Center and they said it would take about an hour and a half. I hadn't had my coffee or anything to eat, so I went across the street to Starbucks. I had a nice cup of coffee and a slice of pumpkin bread. It was almost as good as mine!

As I was sitting there, I figured my plans for the day were probably shot, but maybe that was the Universe's way of saying "Stop. Sit for a bit. I've changed your plans. Yours weren't working." Okay. I'll go with it.

I had forgotten, that just a few doors away was a store called The Fudge Bar that I had planned on visiting months ago. It seemed that time was always running away from me. All these months and I still hadn't gone once. So I figured, okay this is the time. 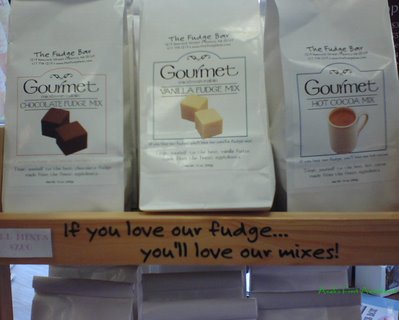 The store is divided into two parts. One side has lots of cute gifts. I must admit that I officially started my Christmas shopping. It smells like chocolate heaven. Yum! I had just eaten, so I didn't try as much as I normally would have. However, I did succumb to the allure of one of their flavors. See below. And yes, it is appropriately named. Enjoy the pictures. 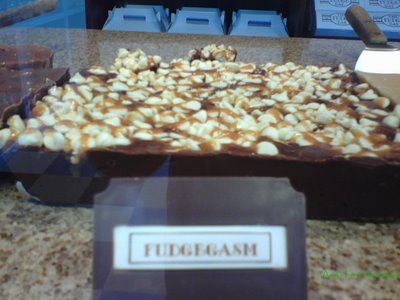 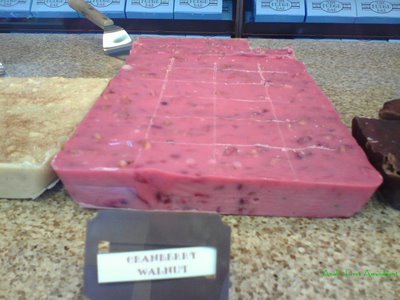 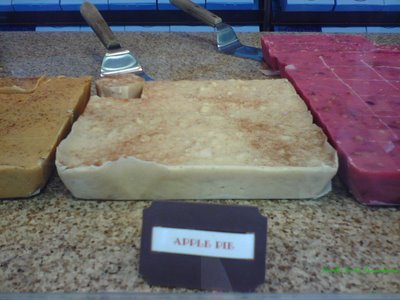 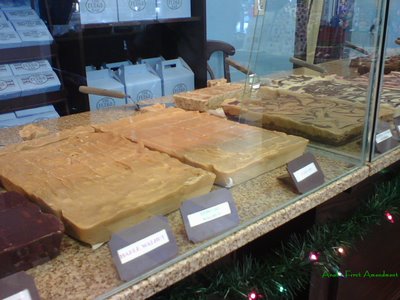 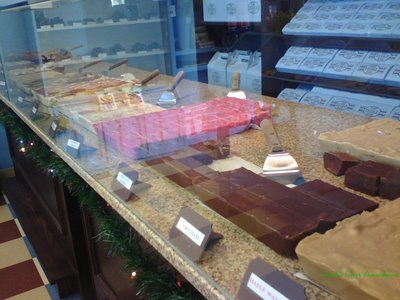 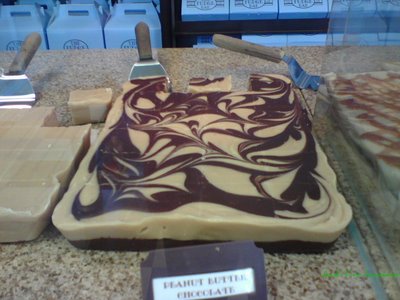 *Updated 9/1/2011* I happened to look at this post today and realized that sadly The Fudge Bar closed a while ago. The website that I had linked to is now another establishment, so I removed the link.
Email Post
Labels: Bug chocolate laundry Quincy

Margie said…
Oh,I love fudge!
So much when my hubby asked me what I wanted on my birthday...
I told him to get me some fudge!
I would be in Heaven in that place!
Yum! Yum!

Margie said…
Cranberry walnut, and apple pie!
I would love the taste of them!
Just too good!

Lisa Johnson said…
anne bucoy - I can't believe it took me so long to get there!

samuru999 - LOL! I'm going to have to go back and try a few more flavors myself!

If you really want to try the fudge, you can click on the link to their website. You can order online. Or better yet, your husband can treat you to some!

Mosilager said…
I think this is called stopping and smelling the flowers... Ginga and Booboo force me to do that quite a lot because I have to get outside to walk them.
11/19/06, 9:17 PM

Keshi said…
I dun have much of a sweet tooth but I dun mind some choc fudge YUMMMMM!

something from me said…
Babe (or should I say sweetheart?),

I've noticed that most of the time when you talk about food, it seems to be food that could loosely be described as confectionery.

Lotus Reads said…
I love stories that end on a "sweet" note and yours certainly did :) Glad you were able to visit the Fudge Bar, mmmmmmmmm, the fudge sure looks delicious -wish I could download some!
11/20/06, 4:19 PM

vasilisa said…
Oh my, those pictures are giving me a serious sweets craving... Isn't it amazing when Universe interferes, and instead of a boring Laundromat you end up in a Fudge Bar? The Universe obviously likes you...
11/20/06, 5:27 PM

I wish I had waited to check your blog out. I'm sitting here, halfway watching The Wire and trying to find a reason not to run to the 7-11 for a large chocolate milk! And then you flood my screen with... with... with... all that good stuff!!! I can usually fight off a sweet tooth, but that peanut butter chocolate.... [insert gurgling sound]

BTW - I'm glad you got a new battery. Old Mand Winter would have eaten you alive during the first good Nor'Easter!!!

Lisa Johnson said…
mosilager - I stopped and smelled the fudge! I guess pets are great for making us stop for a bit too. And that's how you get some of your great pictures!

keshi - Lucky you with no sweet tooth! I'm glad you still enjoyed the pictures!

something from me - LOL. Yes, I do love confections, so I guess I'm just plain sweet all around! : )

wheresmymind - It was kind of funny, even in the middle of everything.

lotus reads - Imagine if computers in the future really could download food or at least scent? Although, that could make spam really scary...

vasilisa - I do like to think that the Universe likes me, but unfortunately my car died last night and had to get towed. : (

It wasn't the battery, although I was going to need one anyway. It was the alternator. It's getting fixed today. *Sigh. Sigh. Sigh*

the thinking black man - Wow!! I guess I need a warning about the food photos. Something like, if you are looking for a reason not to eat some confections, then click your mouse in another direction! : )
11/21/06, 9:58 AM

You have the most entertaining short stories : )

The weather is changing so its that time of year for cars. The tire pressure monitor light just cam on in my car which is common when the weather turns...

Man, I 'm trying to diet to make room for X-Mas....that fudge sure makes me want to run out and get some : )

Nance said…
Anali--I wish I could be more like you. There were so many opportunities for frustration and irritation and going ballistic in your situation, but you were serene and found the best possible facet of each event. I'm going to make the phrase "bug jump" a mantra of sorts for me whenever things start to get tense. Kind of like "Serenity Now" was for Mr. Costanza in "Seinfeld." Wow...from Volkswagens to candy to an obscure Seinfeld reference. That HAS to cause some sort of cosmic, tectonic shift in the time-space continuum...
11/22/06, 11:13 AM

Lisa Johnson said…
dezel - Glad you like them! If I have to go through all this stuff, at least let it be entertaining! : )

nance - That's funny about the "serenity now" thing, except that remember in the end it didn't work and the guy had a nervous breakdown??

I've been a big fan of Seinfeld from way back - even have most of the DVDs. But this thing with Michael Richards... He needs to do some serious self-reflection. I'll leave it at that for now.