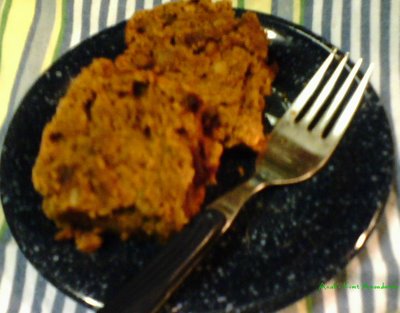 If you have not seen it already, I highly recommend seeing the movie Adaptation. Meryl Streep, Chris Cooper, and Nicholas Cage are in it, which tells the quality of the film. And I just realized that Spike Jonze directed it. Long story short, this movie shows the painstaking process of adapting a book into a screenplay.

About now you are probably saying to yourself, "Anali, what does that movie have to do with this tantalizing bread that I'm feasting my eyes upon?"

Well, a lot more than you might think. I wanted to make something with pumpkin tonight, so searched for some recipes. I found this muffin recipe on epicurious.com and adapted it. 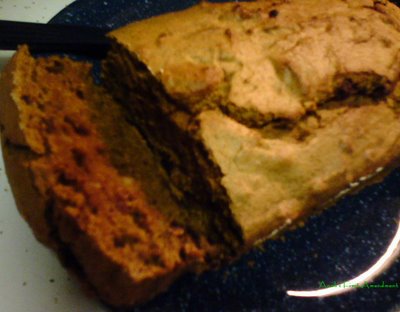 A couple of the changes were because I realized I didn't have some ingredients in the house. Usually I always have molasses on hand and I thought I had purchased some cloves. Unfortunatley, when I looked in my cabinets and spice rack, they were not there, so I added some more pumpkin to make up for the moisture of the molasses and more sugar to substitute for the sweetness. I added more of the other spices to compensate for the lack of cloves.

I used brown whole-wheat flour instead of white. I don't buy regular milk or buttermilk, I use vanilla rice milk. I increased the amount of milk to add some additional moisture because of the wheat flour. I added a little bit of baking powder* to make up for the denseness of the flour. I was a little nervous with this change, because I was messing with the science, which can cause problems with baking.

And I decided that I didn't want muffins, but would prefer a loaf, so I changed the cooking time to 50 minutes. I'm happy to report that the changes worked! This bread is pretty good. I randomly bought dates and walnuts yesterday, so the recipe wasn't as far off as it could have been. The dates added some nice sweetness and texture that I found quite pleasant. I probably could have used raisins instead, but I like dates, in both senses of the word. And with that, let me share with you my newly adapted recipe.

Melt butter and combine all ingredients. Pour mixture into a greased and floured loaf pan. Bake for 50 minutes or until toothpick comes out clean. Cool for a few minutes before removing from pan.


* I just realized that I read part of the original recipe wrong. There was supposed to be 1 and 1/2 tsp. baking powder. I completely missed seeing that before. So my adding what I thought was extra baking powder is probably what saved this recipe from being a disaster. Whew!
Email Post
Labels: baking food movies

vasilisa said…
This looks so yummy! There is something so comforting about baking bread, isn't there? Especially this time of year. And yours looks fantastic!

Anonymous said…
i read all the comments on Adaptation and tomorow i'm going to get one. Thanks for the link.

Lisa Johnson said…
vasilisa - Comforting is the perfect way to describe it. It is that exactly. Thank you!

Margie said…
Hi Anali
Thanks for this recipe...
I am going to make it!
It looks so YUMMY!

Lotus Reads said…
Mmmmmmmm, Anali, this bread really does look delicious! Funnily enough, I made Banana Nut bread yesterday and it was such a hit with my normally hard-to-please children that I resolved to try making a variety of breads for their teatime snack - your pumpkin bread recipe will come in very handy, thanks!
11/14/06, 9:39 AM

That looks yummy; like I said # 3 of the Wonder Years, really paid off for you!

Lisa Johnson said…
anne bucoy - I think you might be pleasantly surprised with the taste of pumpkin!

samuru999 - You're welcome Margie! Tell me how it comes out!

lotus reads - Good timing! I hope they will like it and you too!

dotm - You're quite welcome!