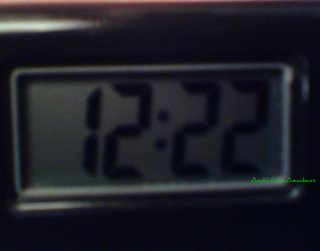 Are you as curious as I am about these two things?

1) Who will be the 300 millionth person in the United States? Will they be born or will they immigrate? There have been so many news stories, I'm getting caught up in the excitement.

I am extremely curious and have been checking the U.S. Population Clock rather frequently. Within the next few days we should know who it is. The current number is 299,959,381.

So far Americans have won all the Nobel Prizes this year. I felt kind of proud actually. I was listening to NPR yesterday and they said that there is virtually no chance that Americans will win either of the next two. I have heard Oprah's name bandied about for the Peace Prize. I wonder...
Email Post
Labels: Nobel Prize US population

Anonymous said…
I would have to say that I am not as curious about either of those questions as you are... which should not be construed to mean that I don't care... I just have other questions taking up lots of space on my hard drive at the moment... like: what am I going to cook for dinner tonight?

As for the 300 millionth person... the person will probably be born as opposed to legally immigrating.

wheresmymind said…
The fact that we are sweeping the Nobel prizes must be making us even more likeable to the rest of the world! ;)
10/12/06, 1:04 PM

Lisa Johnson said…
gunfighter - So what did you cook for dinner?

From your profile, I see that you're in law enforcement, but what's the deal with the gun thing? Has that always been a hobby? Do you do the competition thing?

Sorry to ask so many questions, but the gun thing piques my interest. I definitely shy away from guns myself. As you can see from the title of my blog, I'm a 1st Amendment person, but I can't quite say the same thing about the 2nd Amendment.

anne bucoy - You are quite right! When I tried to narrow down my interests to focus on just one for my blog, I found that I couldn't do it. Too many things interest me.

Nice food for thought …Can’t say I think about that stuff, but I’m thinking about it now that you've served it up : ) So much to absorb out there, sounds like you’re curious and soaking up all you can!

Have a Fantastic Friday!

something from me said…
Did you know that on 9th of October two people asked me 'how is Cyprus?'

One was you my darling.

The other (oh the effect I have on some women) was Maggie.

I have so much more to tell.

Anonymous said…
"gunfighter - So what did you cook for dinner?"

Baked Tilapia... and some kind of quasi-asian noodle dish as a side.

"what's the deal with the gun thing? Has that always been a hobby? Do you do the competition thing?"

The gun thing... I am a tactical firearms instructor for a federal agency. I spend my days teaching people how to fight with pistols, rifles, shotguns, and sub-machineguns.

Guns aren't a hobby for me. They are just tools. My hobby is making rosaries and prayer beads.

No, I don't compete. I'm too busy to play with guns when Uncle Sam isn't paying me for it. Besides, I can shoot as much as I want, every single day when I am at work... and the ammo is free.

The second amendment? Well, that is a whole other kettle of fish, new friend. My perspective on the 2nd amendment is that we already have a "well-regulated" militia: The National Guard... individuals don't really have a constitutional right to have arsenals in their homes.

Lisa Johnson said…
nike - Welcome! Well Oprah has to wait for another year. If Dr. Phil wins, that will signal the end of civilized society. I guess I shouldn't be so hard on him. Who knows what he'll do in the future?

dezel - Glad you liked what I served up! Have a great weekend. I'm sure that you will find something interesting to do and report back on. ; )

something from me - You're still in touch with Maggie!!?? I guess there IS a lot more to this story! And who is Lucia? The mystery continues...

That is pretty intense work. It makes sense that after a day of work, you wouldn't want to do any more shooting after.

I have a friend who goes to a shooting range fairly often and I think has thought about the competition thing, but he's an attorney by day. We have had many a discussion about guns and the NRA.

I definitely agree that people do not need to be preparing for combat by stocking up at home.

Have a good weekend!

starry nights - I think statistically people have predicted that it will be a Hispanic baby boy. Although I don't quite understand how they are going to figure out who is this one person.

Mosilager said…
one of my countries broke a billion a couple of years ago and the other one cracked 10 million :) the USA is right in the middle. btw Orhan Pamuz of Turkey won for literature and Mohammed Yunus from Grameen Bank won the peace prize, I don't know so much about Orhan Pamuz but apparently he spent some jail time for criticizing the govt. Mohammed Yunus is well-deserving, his loan schemes to poor women have really empowered many women in Bangladesh and made a difference there. It has also shown financial institutions that they can lend money to the poor and be very lenient on collecting and still make a profit.
10/13/06, 11:32 PM

Lisa Johnson said…
mosilager - I had never heard of Orhan Pamuz before or specifically the Grameen Bank or Mohammed Yunus, but I've heard of the micro-lending concept. It is amazing!

What an incredible man to have started this. He has done so much good and changed so many lives. I'm really glad that he won.

So So Simple said…
Hi Anali
You know I come from a country of 4 million people...300m is amazing
The city I live in has 1.5 million people in it and everyone else is spread over the rest of the country.
Lots of empty spaces…
Our politicians could do with looking at the peace prize they spend their whole time squabbling and over spending our money
Sunday here cloudy trying to rain.
10/14/06, 9:19 PM

Lisa Johnson said…
so simple - It's interesting how all the cities have so many people, but in both our countries there are vast amounts of wide-open spaces where not many people live.
10/15/06, 1:40 PM


Anali, I missed all your blogs and missed you too.

I came to say that I am somehow back.

Personally, I'm busy waiting for the results of the midterm elections. Living in a battleground state, lots of out-of-state money is pouring in here from the RNC trying to affect the outcome of the Senate race. They've already given up on the governor's race and the House races. Things continue to look good for your man Patrick! I'm keeping up with almost all of the big Democratic races, hoping for significant gains. Time for change.
10/15/06, 5:38 PM

Lisa Johnson said…
jac - You're back! I can't wait to check your blog again! I've missed you!

nance - I agree with you. I'm definitely anxious about these upcoming elections. I'm so glad you're in OH and can vote Democrat!

I have a post all ready to go regarding the Governor's race here. Things have gotten crazy this past week. I tried posting earlier, but Blogger wouldn't let me upload my image. The post should be up late tonight hopefully or tomorrow. It may just not have an image to go with it.
10/15/06, 6:36 PM