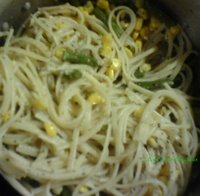 Like this pasta dish, I've thrown in some random tidbits that I hope you will enjoy together even more than if they were served separately.

Ever heard of the word yaough? Pronounced yoff. I think I invented it. It's the combination of a yawn and a cough. I did it today and almost suffocated. I didn't think you could do both at once. I looked up the word and didn't find it, so I submitted it to the Urban Dictionary. My submission seems to have been cancelled though, not sure what happened. Well, at least I tried.

I'm always wondering when is the best time to buy airfare. This new website called Farecast can help you figure out if you should buy now or wait a bit.

Did you know that the family tree of Chinese philospher Confucius has not included women until now? More than one million descendants will be added to the family tree during the next update and finally women will be counted.

The United States National Slavery Museum is scheduled to open in 2007 in Fredericksburg, Virginia. With the opening of this museum, the complete story of slavery in America will be told. *Updated 9/15/2012* I saw this old post today and needed to update it. Sadly the museum was never built and it has quite a ways to go.

Did you know that for 2006, the projected amount of restaurant sales for Massachusetts is 11.2 billion dollars? Or that Seattle ranked number-one in per-capita spending ($1,251) on food away from home in 2003-2004. There is a plethora of information compiled by the National Restaurant Association. Curious about your state? Look here.

A movie is currently in production telling Sarah's Story. Sarah was adopted as a child and then searched for her birth parents. Her mother had died, but she found her father and learned that she belonged to African royalty. Her life has been forever changed.

I just read an article stating that Fidel Castro has terminal cancer and will not be returning to power. This is certainly an interesting time in history. I recently rented the movie The Lost City, which was produced by Andy Garcia. It took him 16 years to make this movie and tells the story of a family in the 1950's during Castro's rise to power.

I enjoyed the movie and really admire Andy Garcia's getting the film done. It took a lot. He never gave up no matter all the obstacles he faced. It made me think about the exile experience and I started doing some reading in the Miami newspapers. I found a recent survey on the opinions of Cuban and Cuban-Americans. Most of those surveyed believe that Castro will not return to power and that democracy will return to Cuba within about four years. Time will tell.

I haven't checked out all these websites, but Time compiled this list and it looks kind of interesting. *Updated 10/9/12* The old list was taken down, so here's an updated list for 2012.

something from me said…
Hi Anali,
I like the new look to your site.
Some interesting things here. Especially Farecast. I must take a look.

I am working in Cyprus at the moment, and find it difficult to post to my blog, hence the lull in activity.

starry said…
Thanks for all those tit bits. i have to look into the farecast as I am always buying tickets for the kids to come home. I think I would love to read the book.
10/9/06, 3:17 PM

Mosilager said…
how about yawcups? when you have hiccups and have to yawn at the same time. Those are painful, and they stay painful for a bit. Ow
10/9/06, 6:00 PM

Love the new look of your page; very nice. The slavery museum is about 40 minutes from me so I plan on attending when the doors open, should be interesting and educational.

I ‘am also thinking about a NAPA trip so will certainly check the link for the airfare you provided. (Thanks)

Try to resubmit your word, perhaps it was just a system error.

Have a wonderful week!

Lisa Johnson said…
something from me - Good to hear from you again! I was wondering what was happening with your blog. I'm glad you like the new look. I felt like it was time for a change. How is Cyprus?

wheresmymind - I don't know that I'll make the grand opening, but I definitely plan to go. It could be a nice road trip. The Bug might like it!

starry nights - Glad you liked the tidbits! I hope you can find some good fares too.

mosilager - LOL! Yawcups sound horrible! Luckily I've never those. Did you invent that word? You should submit it!

dezel - Glad you like the new look. That's wonderful that you are so close to the museum. It should be a pretty incredible. I think it will be a really emotional experience too.