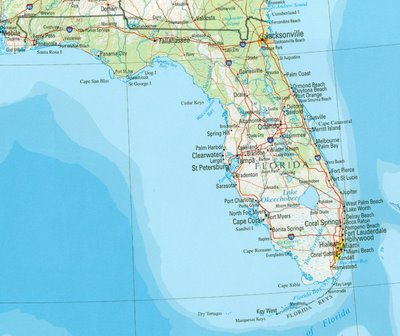 I recently learned from G, who lives in Florida, that Florida allows early voting. Although those of us in other states, like Massachusetts, have to wait until Election Day on November 7th, Floridians can vote now. I found this information on Florida's Division of Elections website.

The 2004 Legislature passed legislation which standardized early voting throughout the state. Early voting is defined as "casting a ballot prior to election day at a location designated by the supervisor of elections and depositing the voted ballot in the tabulation system".

Early voting will be conducted 8 hours per day on each weekday during the early voting period and will be provided for 8 hours in the aggregate for each weekend during the period.

Voters who want to vote early should remember to bring a photo and signature identification with them.

Contact your supervisor of elections for locations, dates and times of early voting.

Considering all the problems that Florida has had with voting, it seems to me that this could lead to more confusion. But who am I? Just a Massachusetts Democrat.
Email Post
Labels: early voting Florida

I'm really against this early voting process. I'll give the Devil his due though, it MAY allow for more accurate counting if people can take their time and do it right.

But lets be real here - ANYTHING can happen in an election, ESPECIALLY a FLORIDA election. There are now ample opportunities for votes to be... uh, shall we say - misplaced, overlooked, lost, damaged, tampered with, BURNED TO A CRISP!

I just think where there is opportunity for corruption in politics, most likely it will rear its ugly head.

I am also afraid that candidate positions will leak out to the media and some people may begin to be dissuaded from participating in the process. They may unfortunately feel that their vote is not worth their effort.

Down here in Maryland - we're approaching election time with the incumbant Governor wanting "The Free State" to go back to a paper voting system. I thought we were in 2006 not 1906!!!

I heard a news report about early voting being the coming thing in several states in the very near future.

jeseem - I think the longer those in charge have to "handle" the ballots, the less chance for the integrity of the vote. Jeb Bush is still the Governor.

nike - The earlier she knows she's a loser, the more time she and her friends will have to do something about it, by any means necessary.

the thinking black man - I totally agree with your statement. You couldn't have put it any better.

"There are now ample opportunities for votes to be... uh, shall we say - misplaced, overlooked, lost, damaged, tampered with, BURNED TO A CRISP!"

starry nights - We can only hope!

I would have to agree with TTBM on this one. I am in VA and that MD race is a little nasty.

Happy Halloween to you ! Don't forget about all the great deals on candy on Wednesday. I don't have a sweet tooth, thank-goodness (lol)

-- I know you have some chefs on your site, and even yourself. I need a quik and good recipe for crabcakes.... any help ?

dezel - Happy Halloween to you too!
Unfortunately, I don't have a crabcake recipe of my own, but I did a quick search and found a few. Here is a link.

These cakes should be moist enough not to have to flour, egg before crumbing but feel free to do so if you like that kind of crust.
The Japanese Panko Crumbs are excellent…if you haven’t tried them please do

Back into fridge another hour
Fry in a good vegetable oil till golden. Drain on paper towels.

Serve with your favourite dipping sauce

So So Simple said…
I forgot to add 2 tbs spring onions to the mix.
I have posted the recipe and photos on my blog in case you want to see them.

So your election is next week I believe. Will this make any difference to your lives if the Democrats win the majority? You still have the same President.
10/31/06, 2:40 AM

Lisa Johnson said…
so simple - Thanks for the recipe! I can use it too!

And yes, this election could change a lot. If enough Democrats win Senate and House of Representative seats, then Democrats could take back the majority in both houses, which we have not had since, I think 1994. Someone please correct me if I'm wrong!

The Republicans are deathly afraid of this. This will make it very difficult for Bush to push his agenda. He will not get enough votes to pass through any more insane legislation and will have a very difficult time appointing conservative judges to the Bench, because he will not be able to get them confirmed.
10/31/06, 8:38 AM

So So Simple said…
Interesting.
We have a socialist government here which is in its third term. They started off with a big bang doing good work...(after the previous conservative government which we all desperately wanted to get out) BUT of course they are now all power crazy...So it seems all politicians are mad and we can't trust any of them. Let's just keep on cooking eating drinking and generally having a fab time
10/31/06, 4:04 PM

Nance said…
This time around, Ohio is the new Florida. The rules for voter identification have changed FOUR times now with intervention by the courts. We will be carefully watched by election overseers here, and there are already ads on the radio with toll-free numbers to call to report election fraud with actors and actresses like Jody Foster and Alec Baldwin doing the spots. Anyone here can vote absentee early without providing any reason; indeed, we were encouraged. I didn't. Some of my family did. I am very concerned that Ohio, whose Secretary of State is very corrupt and is involved in a run for governor himself and therefore not wholly concerned with affairs at home, will have a complicated and messy midterm election.
11/3/06, 3:50 PM