Close Encounters Of The Famous Kind 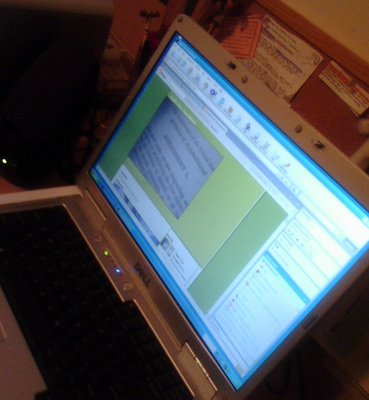 Usually I have something definite to blog about. Today, I don't. I'm just sitting at my desk and want to do a post. It may be kind of rambling and will take a shape of it's own. We'll see what happens.

This morning I was trying to be part of the solution instead of complaining about the problems. I did some volunteer work and made phone calls on behalf of the Deval Patrick Campaign. I do my best to be super polite and not to keep people on the phone for too long. A few people hung up on me, but a few people were very friendly too.

I've had lots of phone experience in my life. My first job, a summer job that I did through high school and college was as a telephone operator. You never knew who was going to be on the other end of the phone or what they would say - someone calling in an emergency needing the police, kids making prank calls and flushing the toilet in your ear, a male prisoner wanting to hear a woman's voice, or someone making a person to person call with someone famous. Even though this was back in the early 80's, I was working on a computer. Little did I know how well it would serve me in the future to have this experience.

I was sixteen when I started, but looked about ten and was the youngest operator to work in that office. I remember walking in on my first day looking very lost. Someone asked me if I was looking for my father! It's interesting looking back at those times in your life when you felt lost and how people reacted to you.

I had an internship at Channel 7 during college. My first day walking into the newsroom, I was looking for the Assignment Editor and again was kind of lost. At the time, Paula Zahn and Tom Ellis were the news anchors. I remembered Tom Ellis from the news when I was a little kid. I used to think he was so handsome and had such a little girl crush on him! I think my mom even has a picture of me watching him on the news from back in the day.

So there I was, lost in the newsroom and who do I see sitting at a desk in front of me? Tom Ellis! He asked if I needed help. I think I managed to say something coherent. He smiled a big smile and pointed me in the right direction. He was so nice to me, a lowly intern! Little did he know of my girlhood crush!

I will never forget that Tom Ellis a famous anchorman went out of his way to speak to me. Yet over my semester at Channel 7, there were reporters who would never make eye contact with me, never mind speak to me, one in particular. I haven't forgotten who he is either.

It's interesting which famous people think they are above the "little people." I've seen former Governor Michael Dukakis around the city. He is always friendly and says "hi." I literally almost bumped into former Governor William Weld as I was walking into a book store and he was walking out. I had no idea how tall he was. I looked up then realized who he was and smiled - momentarily, forgetting his politics. He did not even look at me and walked on - then I remembered his politics. Interesting...
Email Post
Labels: famous people Governor Massachusetts

Kuan Gung said…
It's all so relative individually...I've never understood the ego problem of some so called celebities...strange indeed, why they think honor is importent sounds like to me you're putting your happiness in other people's hands...lol
9/3/06, 12:32 AM

A good number of these celebrity types are only as important as the people around them make them out to be. A lack of humility in the long run brings about the downfall, be it a celebrity or just an average Joe.

jac said…
I once met a famous film star, who had a very severe ego problem. I recognized him the moment he entered the aircraft which I was in.

Seeing his pompous attitude, I ignored him while he sat near me in the business class.

All the people in the cabin were eying him with awe, while I sat calmly reading a newspaper. I just ignored him completely which made him curious and restless at the same time.
Finally fed up, he asked me where I was traveling and what my nationality is. When I answered there was surprise all over him which made him ask me at a low voice if I am not seeing any movies recently.

Hearing my negative reply forced him to introduce him to me, may be for the first time in his movie career.

I had my best laugh that day.

Lisa Johnson said…
kuan gung - It's true that it comes down to the individual. I guess it depends on how well grounded they were before getting famous.

dezel - I agree. If they have an entourage of people telling them what they want to hear, that contributes to the inflated ego. Eventually though, as you said, people will find them out...

jac - LOL! Now, I am so curious about this star! Who was it? That is hilarious that he introduced himself to you.

I will so miss your stories. Please drop by every once in a while to visit your finally found cousin!

starry said…
some celebs are really nice and down to earth while others dont care.its nice that tom ellis was nice.
9/3/06, 9:51 PM

suttonhoo said…
loved this. have absolutely nothing to contribute, just wanted to let you know that I loved, loved, loved this ramble. :)
9/4/06, 9:27 PM

Lisa Johnson said…
starry nights - It is a great joy to meet the nice ones.