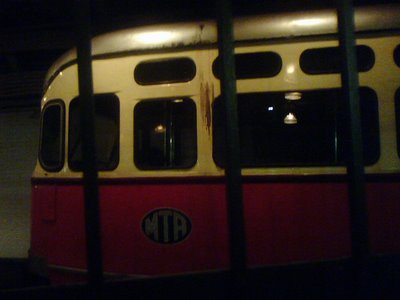 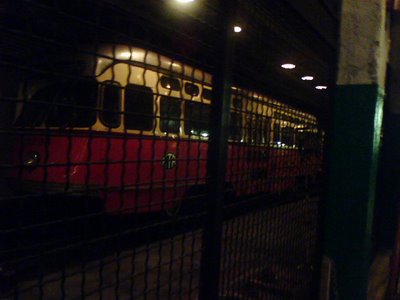 I've been admiring these old trains for years. They are located on the Green Line at the Boylston T stop. I found a website with some interesting articles and photos.

The MBTA (Massachusetts Bay Transportation Authority) or the "T" used to be called the MTA (Metropolitan Transit Authority) as you can see on the train, which is behind a caged enclosure. I stood in front of the cage taking pictures for about five minutes. The light was low and I'm still using the camera phone, so the pictures are not as good as they could be.

In a previous post, I mentioned the controversy surrounding photography on the T. A few weeks ago, I was on the Green line and a conductor announced that no picture taking was allowed on the T. The saga continues...
Email Post
Labels: Boylston T Green Line photography Subway Stories

Mosilager said…
Back in the day I took a photo of "Ganges", the plane that was going to take me from Amsterdam to Nairobi. I don't think I could do that any more. It's pretty sad when you see good stuff at airports but can't take a pic coz everyone's so paranoid. Nice blog idea, thanks for stopping by.
8/6/06, 6:23 PM

Nance said…
How sad; now we can't even take photos of something from our past. What is left? This nation's morale is really at an all-time low, and small incidents like this are repeated across the country every moment. It is hard to keep hope vital.
8/7/06, 7:28 PM

Lisa Johnson said…
wheresmymind - I'm curious as to how and if that is really enforced. With so many tourists and just people in general,it would seem to be almost impossible.

starry nights - Hello! Thanks for stopping by!

mosilager - What a great momento to have of your travels! I hadn't even thought about the picture taking thing at the airport. I definitely wouldn't want to push my luck, especially flying out of Logan.

nance - Well, I'm prepared to push the envelope taking these pictures. It's nice knowing that the ACLU is aware of the issue also.
8/7/06, 10:18 PM

Mosilager said…
Logan definitely... I wouldn't want to put a foot wrong in that airport, or talk in foriegn languages. Although I have to say that my recent flight to Austin wasn't bad at all. The extra security seemed focused on little old ladies instead of me so the most I had to do was take off my shoes.
8/8/06, 10:31 PM

@LargoL said…
Hi, I used to live in Boston and I was fascinating by the subway.

I took some pictures of the green line.

Those pictures of yours of the old red line are really awesome.

Lisa Johnson said…
mosilager - Funny post! Did you ever do that list? Interesting about the little old ladies. I'm glad that everyone is getting checked out. Security has to spread the love!

luis fernando largo gutierrez - Thanks for stopping by and for the kind words! The subway fascinates me too. There's always a story...
8/9/06, 12:12 AM

Mosilager said…
no actually i've been having a spot of blogstipation so didn't get around to doing that... now I have 3 lists of things to do - list of fun things to do in church, list of things that bush should know before visiting southern africa based on a request from my roommate after reading this post, and a tag to answer. Hope the blog muse is listening.
8/11/06, 4:13 PM