Subway Stories - In A Red Sox State Of Mind 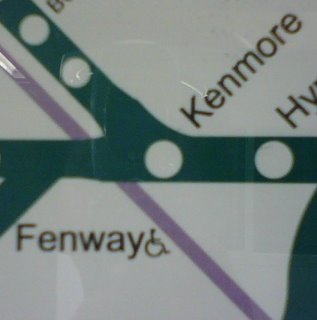 For those of you who have not heard the sad news, the Red Sox got swept. The Yankees beat us to a pulp. They won five games at Fenway. So sad. I love the Red Sox, but I know I'm not hard-core like some fans. I love to go to the games, but they are SO expensive. I haven't been in quite a while. I'll watch a game on TV sometimes, but there is nothing like being at Fenway.

The atmposphere carries from Fenway to the T. Fenway Park is located right near the Kenmore T stop in Kenmore Square. Before and after a game, Red Sox Nation is on the T. You can usually tell everyone who is on their way to a game as opposed to the rest of us, commuters going to work or tourists going off to do something else. They are dressed up in all their gear. They are carrying signs. They are in large groups being very loud and happy. There is an air of excitement, which makes it all the more depressing when you are commuting to work and they are off to fun at Fenway. They're going to be doing the wave, drinking beer, eating hot dogs, drinking beer, passing beach balls, drinking beer, buying T-shirts, drinking beer. Let's be Fenway Frank. They are going to be drinking a LOT of beer.

After the game is over, the mood varies depending upon whether they won or lost. If they won, they are even louder, but at least all the drunk people are happy. When they lose, most people are quiet, but the drunks are NOT happy. It can get ugly on the T.

During the Playoffs and World Series in 2004, the feeling of joy on the T was palpable. And this was everyone on the T, whether they were going to a game or not. People were just happy and smiling, in a good mood. Pure joy. Strangers would go up to each other and start talking about the Sox, the history, all that they had been through. How it had finally happened. They couldn't help themselves. It was magic.
Email Post
Labels: Fenway Green Line Kenmore Red Sox Subway Stories

I don't like when the joy turns to sour.

And people get hurt, drink beer and brawl and get really hurt again.

Lisa Johnson said…
samuru999 - Hi! Thanks for stopping by and the kind words. Glad to hear you are a fan. When did you live in Boston?

wheresmymind - I cannot believe their season may soon be coming to an end. I'm not a big football fan, but I do watch the Superbowl when the Patriots are in it. I used to never watch it, but then they were always in it!
8/22/06, 10:12 AM

Nance said…
anali--
my two favorite teams: the cleveland indians and anyone who is playing the yankees! i'm a yankee hater from waaaaay back. all they have is a big wallet. too bad that johnny damon (major league hottie) deserted the sox. such a cutie. have you seen our (cleveland's) answer to him, grady sizemore? not just adorable, but a helluva ballplayer too. too bad cleveland's season hit the skids, but i'm a hometeam fan, so i stick with them all the way. go tribe!
8/22/06, 2:37 PM

starry said…
Not a base ball fan .always have a superbowl party because my hubby loves football and just learned to love the game instead of complaining. I am sad though the red sox lost. only went to a game at the yankee stadium in new york in 1998.
8/22/06, 6:57 PM

Lisa Johnson said…
nance - Sometimes I still can't believe Johnny left the Sox. Like when he hits a home run for the Yankees! I know it's just business, but it still hurts a little bit. You have to love the home team; sorry about Cleveland.

starry nights - Superbowl parties are fun even if you're not into football. I've never been to Yankee Stadium. I actually would like to go before they build the new one, just for the history of it.
8/22/06, 8:57 PM