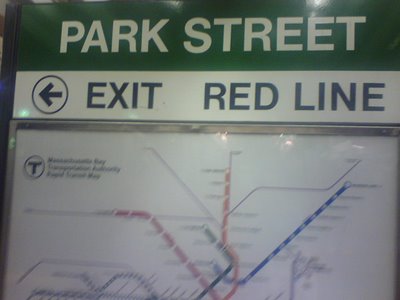 Well this story didn't take place on the T,but I took the T to meet up with a fellow blogger for lunch. For those of you who have seen comments from wheresmymind (aka "Jeff"), you know that he is a great blog friend. We met for lunch at Fajitas & Ritas, which is right near the Park Street T stop. I could have walked there from work, but I did something to my foot and walking was aggravating it. Since it was our first meeting, I didn't want to show up limping, so I took the T just a couple of stops and arrived sans limp. Jeff is just as nice in person as his comments. We enjoyed our meal and the conversation - unlike the two people at the table next to us who did not speak to each other for the entire meal. Very bizarre.

Anyway, Jeff has also done a post about our lunch. For those of you who have seen it and are wondering why my head is cut off in the picture, not a bloody stump head obviously, but unseen; it is my doing. I'm rather ambivalent about the whole picture thing. I have the little mini-picture of me here on my blog, so you can see me somewhat, yet not quite. I don't really like the idea of a bunch of pictures of me circulating on the Internet. It really creeps me out, so I'm keeping it to a minimum at this point. Maybe I'll change my mind. I don't know. I guess I'm old-fashioned that way. So for now, I guess the mystery remains...
Email Post
Labels: blogmeet

Glad you two had an enjoyable lunch, it sounds delicious. My last week blogger meet blogger was my very first experience and it turned out nicely as well.

I can understand the entire picture thing, just glad you two had a nice time.

Has the little critter come back?

Have a wonderful weekend.

jac said…
I been to jeff's to see the amendment. Now the face...
If the eye part shown above is yours, I have a poetic imagination, I will have my amendments though. LOL

Lisa Johnson said…
dezel - This was my first blogger meeting too. So far I have not spied the opossum, so maybe he found a new home. I sure hope so!

Lisa Johnson said…
jac - Just checked Jeff's comments again. I'm glad you think my hands look cool, vivacious and friendly, but they're not Asian. I'm African-American. Not that it should matter...
8/25/06, 9:36 AM

wheresmymind said…
Anali has not only beautiful hands but a beautiful smile as well! I had a blast meeting up you the other day :)
8/25/06, 9:39 AM

starry said…
That was nice that you met up with Jeff for lunch. I feel the same way about posting my pic on the internet. kind of scared that it may be misused.dont know if my fears are warrented but I do.I have to visit Jeffs blog.
8/26/06, 12:18 PM

jac said…
anali-that makes you more vivacious ! You must be my long lost cousin.

I looked up the word "kappiri" and found the beautiful post that you wrote about your Grandmother. You are such a wonderful storyteller!
8/27/06, 3:36 PM

Nance said…
anali,
i'm the same way about my pic. my adventures are absolutely true, and i'm always candid and plain-spoken, but some things are just not going to be out there.
8/27/06, 3:43 PM

So So Simple said…
anali

I'm with you photos need to be fab before you publish.
I am on your blog as you left a message on mine sososimple

Actually the place for comments should be there somehow it sems to drop off
Thanks for letting me know.

Went to Massachusetts in April this year first visit. Only made Boston
and Cape Cod didn't
have time for any more...loved it early spring and all

Lisa Johnson said…
Cookie Girl - Thanks for stopping by! Boston and the Cape are definitely quite alright for a first visit. There is so much to see in both places. Fall is a beautiful time too, when all the leaves are turning.
8/27/06, 11:48 PM