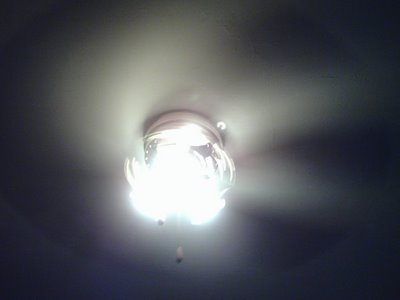 Boston is melting along with the rest of the country. The heat has been severe and unrelenting. I was going to blog about how I'm looking forward to it cooling off a little. I have air conditioning in my bedroom, which is in the back of my apartment. It's not too hot there, but it's really hot up front. I took a picture of my living room ceiling fan, which is circulating the hot air. We are supposed to get thunderstorms tonight that will cool us down for tomorrow.

But the more I thought about it, I realized that I can't complain about the heat. It is summer after all, well it's also global warming, but that's another post. All day, I've been reading about the war going on with Israel and Lebanon and all the people trying to flee. Some people can leave and go home. Others who live in Lebanon or Israel, that is their home. Where are they to go? My heart breaks for everyone. Will there ever be peace in the Middle East?

Just the other night, I watched a DVD called The Syrian Bride. It was a really touching film that was the result of a collaboration between Palestinian and Israeli filmmakers. There are several interesting story lines, but the main character is a Druze woman living in the Golan Heights , who is about to marry a man living in Syria. Once she crosses the border into Syria, she cannot return home. Her wedding day is the saddest day of her life.

The horrible choices that people have to make because of war makes me so angry. Life is difficult enough with disease, old age, and natural disasters - another earthquake and tsunami in Indonesia. War is man-made misery. It is a choice and nobody wins. Will people ever learn?

I just heard the rumble of thunder in the distance. Ever since I was little, I've always been afraid of thunderstorms. The crackling noises and booms that come at unpredictable times. Trees falling and wind whipping. Lightening strikes that can kill people and damage buildings. It sounds like war. I'm afraid of this and children in Israel and Lebanon are living in the midst of madness.
Email Post
Labels: movies rant

wheresmymind said…
Hope you slept ok last night! I am not holding out too much hope that there is gonna be peace over in that area of the globe for a long time...the whole situation sucks! I have a friend in Tel Aviv that is keeping his head down from rockets all day...that is no way for anyone to live (on either side of this particular conflict).
7/19/06, 8:08 AM

Lisa Johnson said…
wheresmymind - Thank you for the concern. I did sleep well actually. I hope that your friend is okay and continues to be so. It definitely is no way to live.

something from me said…
Thanks Anali.
You are a babe.
I will probably drive to Boston from New York, taking about a week to travel around some of the mountains.
Do you have email? I have a couple of questions, if you don't mind.

Oh. Maggie never likes to spend money - more on that in later posts.