Talk About a Backup Plan! 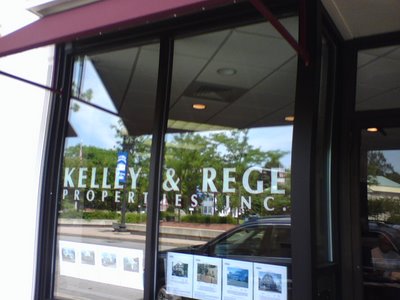 I watch Regis & Kelly. I admit it. I think they are hilarious. Well, this morning, I had just watched the first few minutes of the show, but had to leave to go to the dentist. It was a great visit, so I was in a really good mood while driving home. Out of the corner of my eye, I thought I saw a sign that said Regis & Kelly. I was stopped at a red light and grabbed my camera phone. Of course the light changed green, so I had to drive through the intersection. I pulled over and parked my car. Add funny Boston accent here if you wish!

I walked over to the store front and took a couple of pictures. Isn't this hilarious? I wonder if they are fans of the show? They have to know that they are providing humor to all who drive by.

I think between Regis & Kelly, they have at least four television shows, so they are always working to make that money. Maybe they figured if the whole show biz thing fizzled out, they would try their hand at real estate... Yeah, that must be it!
Email Post
Labels: pictures tv show

Lisa Johnson said…
At the moment, I have an unusually flexible schedule and set my own hours, so I tend to work later. I'm not a morning person, so I can relax with my coffee and Regis & Kelly!
8/1/06, 9:27 PM

something from me said…
Hi Anali,
Nice to know you meet some nice gentlemen.
You know next time you should ask for their number.

What is Regis & Kelly?