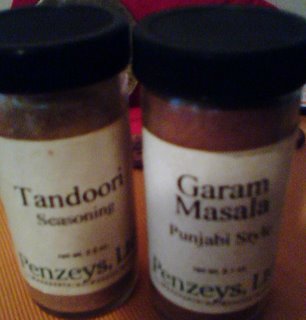 I'm having a crisis of the mind - over Indian food. I love it. I think a good deal of my friends and family do too. But what about the rest of the state? I love trying new places to eat and very rarely make a repeat visit within a short span of time. Well, my actions over the past two weekends may have caused a rip in the space time continium, because I visited the same restaurant on two consecutive Saturday nights.

Last weekend, two friends and I planned an evening out, which was supposed to have included seeing the extraordinarily attractive Johnny Depp in the new Pirates movie. "Boy eye candy" as one of my girlfriends put it. Unfortunately, the tickets were all sold out so that didn't happen, but we had some pretty good Indian food at Tantric. I had my standby Tandoori chicken, when I'm not sure what to get. We had plain, garlic, and rosemary naan. The only thing I would not recommend was the mango lassie. It was a bit too thick for my taste. Looking back, I didn't even think to take pictures of the meal, but I didn't realize I was going to blog about this until tonight.

Overall the meal was quite enjoyable. Our waiter was really friendly and prompt. The ambience was great - beautiful decor, colorful tapestries on the walls, lit candles on the tables, and great music - R&B and downtempo world. The place was pretty empty though. I figured it was because it was kind of early. Well, last night I was back at Tantric with another friend and four teenage girls, which was an experience in itself!

Anyway, we were there later than the last time and the place was still fairly empty. I mentioned it and my friend suggested that a lot of people aren't into Indian food. I was really shocked. Doesn't everyone love Indian food??!! Everyone joined in and seemed to be saying that Chinese and Thai foods are kind of standard, but not really Indian. I have noticed that it is easier to find Chinese or Thai food rather than Indian. I even checked a listing of top rated Indian restaurants in Boston. There were less than I thought. I did read an article recently about how Indian food is catching on in this country. I guess it is still the beginning stages though.

Well, the restaurant business is tough and places are always closing. I'm not sure how Tantric is on other nights, but they sure do seem to need a boost in business. I hope they do not end up being another one of those restaurant casualties. By the way, the naan that I had last night was to die for. It's called Lakhnawi and was sweet. It was topped with coconut and filled with ground nuts.

wheresmymind said…
We are big fans of Indian food as well...a great (but expensive) restaurant in Needham is Masala Art...good stuff, though fairly expensive. Our favorite places are Tanjore in Harvard Square and India Paradise (http://www.indiaparadisefood.com/) in Newton.
7/17/06, 8:10 AM

something from me said…
Anali,
Indian food is very popular in the uk, especially London. We have a place called Brick Lane. Very famous for a multitude of Indian restaurants.
Come to London. I will show you what bus you need to get there.
Steve
7/18/06, 5:34 AM

Lisa Johnson said…
Steve - I have heard that about London and will check out Brick Lane when I make it over there. Hopefully it will be sooner rather than later.

ironman - I don't like hot food either. All Indian food is not hot. Uually you are given the option of mild spice, which I always take. And for your second question. I love food more than 85% of the people on the planet. Keeping that in mind - food is absolutely NEVER better than sex.
7/18/06, 9:03 AM