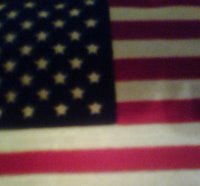 This is a poem that I wrote in 2003. Mars was extraordinarily close to the earth and those of us who like to gaze at the heavens were treated to quite a show.

Mars rises in the darkened sky on the Fourth of July.
We lay on a hammock watching the heavens
alive with bursts of blue, red, and white.

A shooting star glimmers
under the glow of milky moonlight.
Tripartite sounds of fireworks, ooohs, and aaahs
echo in the distance,
reflecting the spirit of the night.

The planet of war gazes down on our nation
as we celebrate its birth.
Flags waving dutifully
surrender to the wind.
Email Post
Labels: July 4th poem

Thanks for participating in the challenge.